Home Life Food All You Need to Know About Sushi 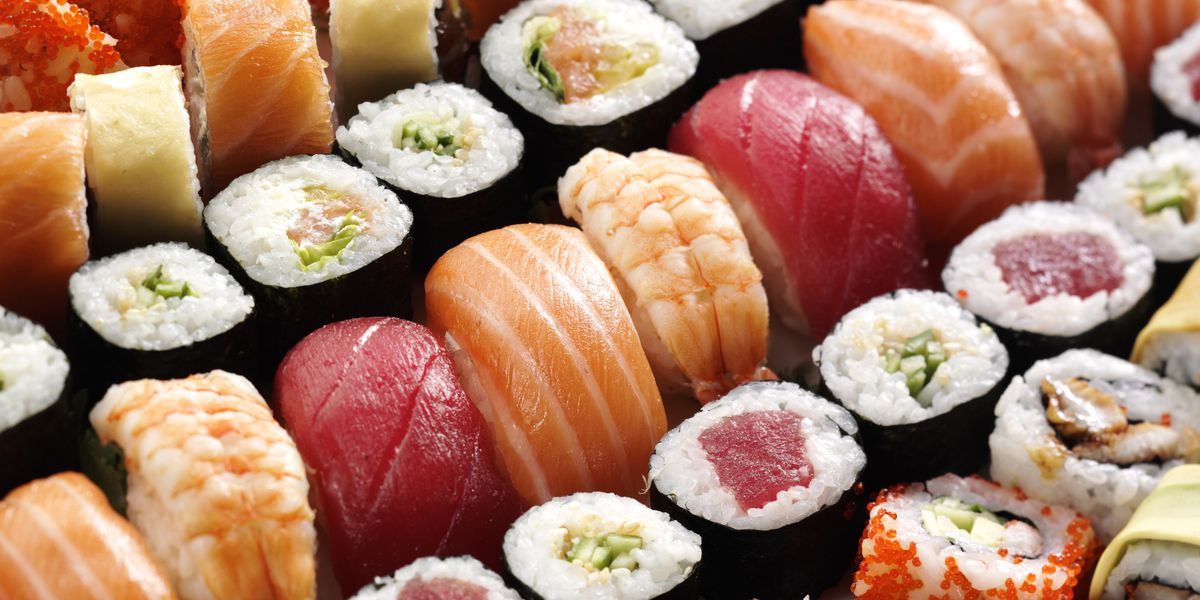 Amongst all Japanese cuisine, sushi is the most famous food for its delicious taste and large variety of choices for foodies. However the large variety can be confusing to a sushi newbie. Dive into the world of sushi by understanding the basic types of sushi, the ingredients and what condiments are most complementary

Sushi can be defined as a Japanese dish that consists of small amounts of rice garnished with fish (raw or cooked), vegetables or egg. This dish is usually served with pickled ginger, wasabi orsoy sauce on the side.

The sushi we eat today is quite far from the previous origins of what it was previous cooked as. Fish in sushi was salted to last longer, while the rice was fermented. In fact, the word “sushi” means “sour”.

This style of sushi was common in Japan until the end of the Edo period, when it evolved into Edomae zushi which is closer to what we eat today. Hanaya Yohei was responsible for this development, in which the sushi was larger, used fresh fish, was prepared quickly and meant to be eaten with hands. 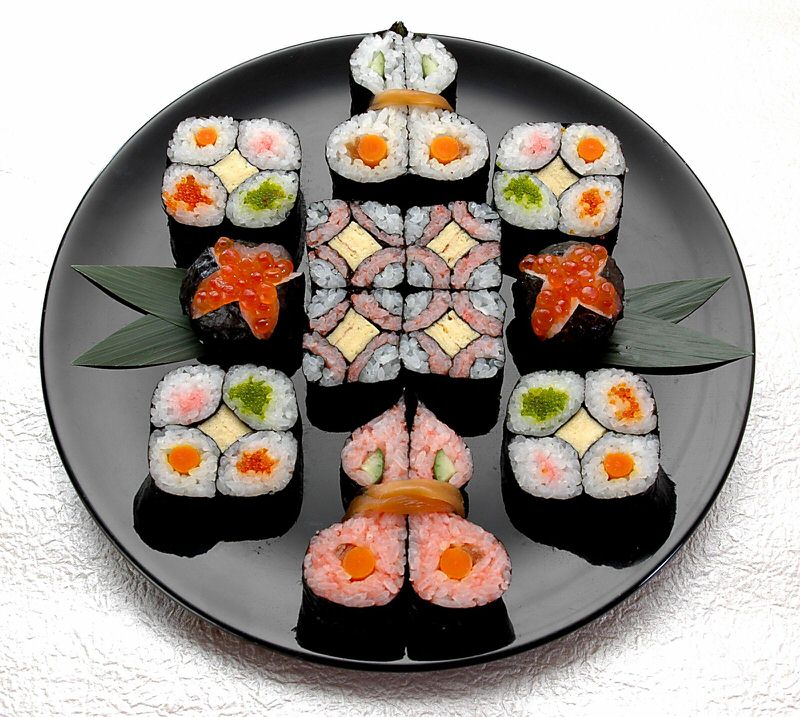 Makizushi means ‘rolled sushi’. Although generally wrapped in Nori or seaweed (that’s where the term ‘nori maki’ or ‘norimaki’ comes from), it can be varied from thin omelettes, soy paper, cucumber or shsiso (perilla) leaves. This type of sushi is differentiated by the size of their roll: smaller ones are called hosomaki while bigger ones are called futomaki. 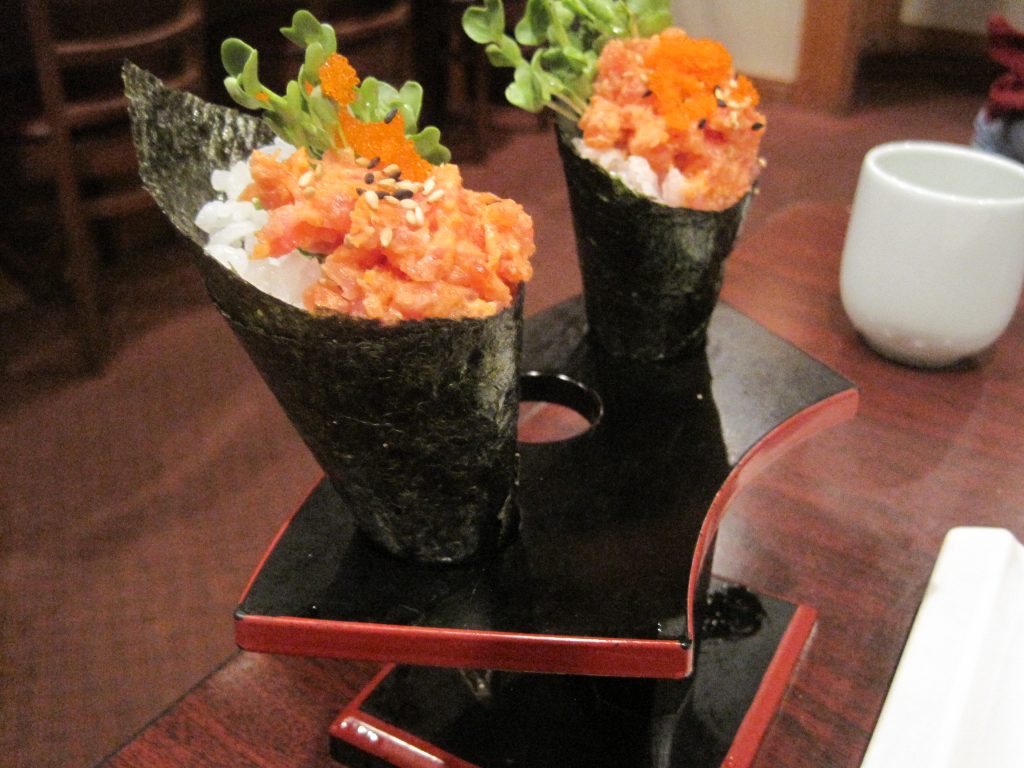 Temaki Roll or is similar to the makizushi, except that it is made to be the shape of an ice cream cone. Temaki rolls are said to be perfect for family dinners, for it is easy to make and the ingredients are easier to find. All you need is to prepare the sushi rice and your favorite sliced meats and vegetables, like tuna, crab, avocado, cucumber, and maybe some seasoned shitake mushrooms and dinner is served! It is ideally paired with a small bowl of miso soup, which is also very nutritious addition for the whole family. 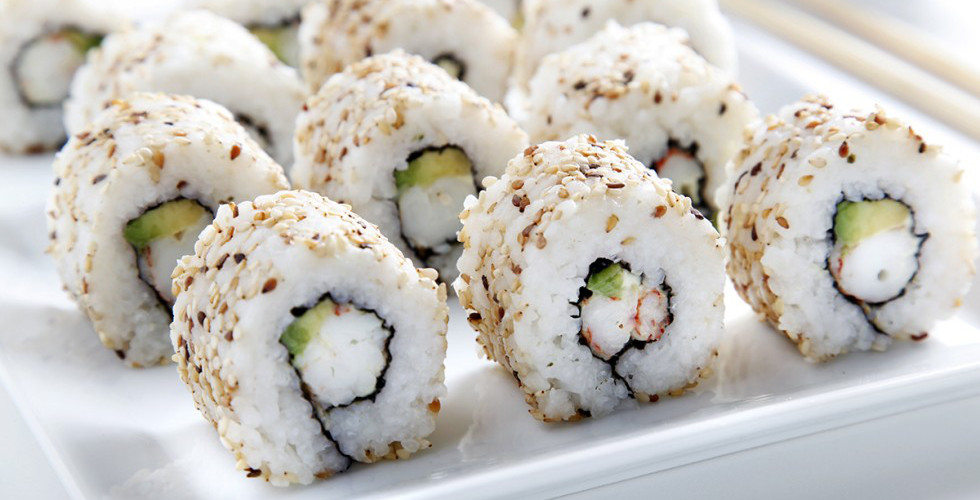 The ‘uramaki’ or else called the ‘California roll’ is the result of the rise of American customers. Not many were fans of the nori used in makizushi, so Ichiro Mashita (a sushi chef) flipped the order of the sushi. The rice was put in the outside while the nori was put in the inside, binding the sushi. Toppings are some of the most unique aspects, for foodies can have the choice of just having flavoring in the inside or atop the dish. Other than that, uramaki is usually made with more fusion and experimental twist, such as avocado and mentai sauce. 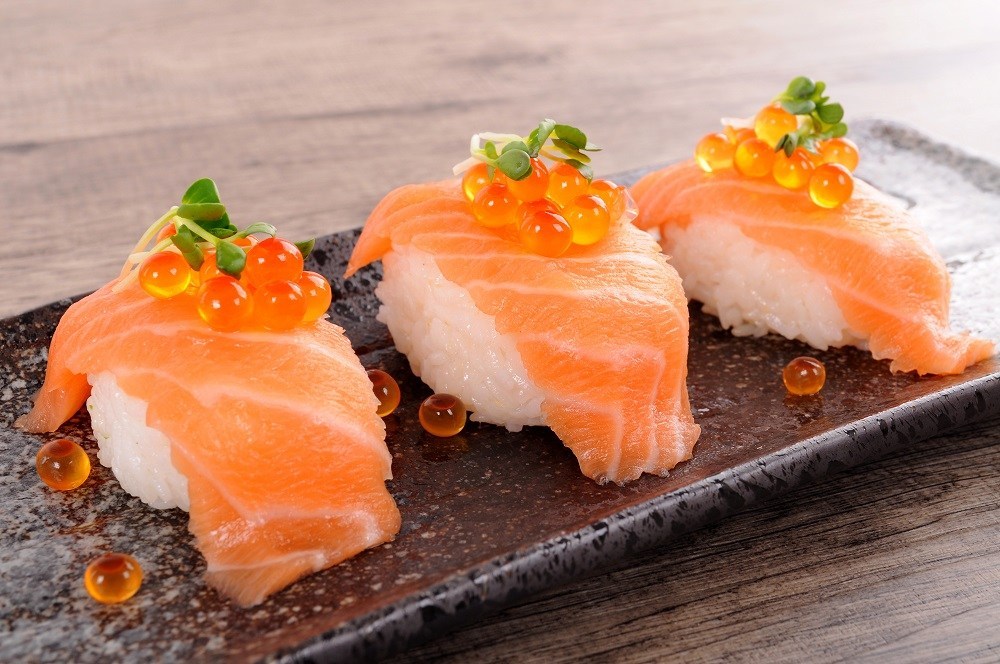 Nigirizushi (also known as Nigiri Sushi) is really popular. The literal meaning to the name is ‘hand pressed sushi’, in which various ingredients are put on top of rice with vinegar. There are numerous toppings to this from eggs, various types of fish, octopus, eel, squid, octopus and many more. Sometimes, a piece of nori surrounds the sushi with wasabi put in the middle. 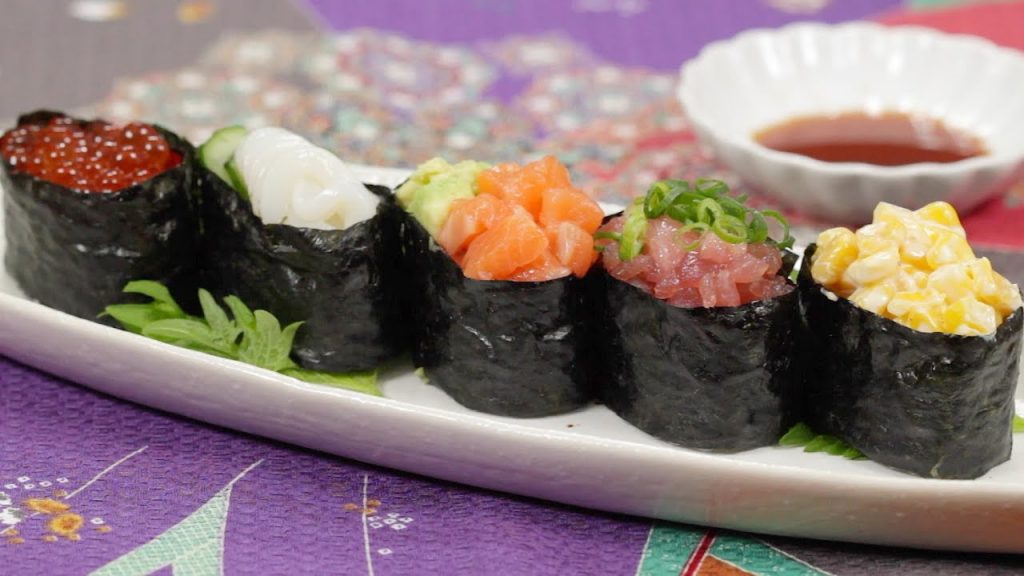 Thanks to its shape that resembles a battleship, this type of nigirizushi is also nicknamed the ‘warship’ or ‘battleship’ roll. It was originally invented in 1941 by Kyubey restaurant in Ginza, Tokyo. Rather than a nigirizushi which would not be able to hold the toppings, the Gunkan maki has an extra layer of ‘nori’ which would hold the toppings in place. Some common toppings include quail eggs, natto (fermented soybeans), oysters, sea urchin and ikura (salmon roe). 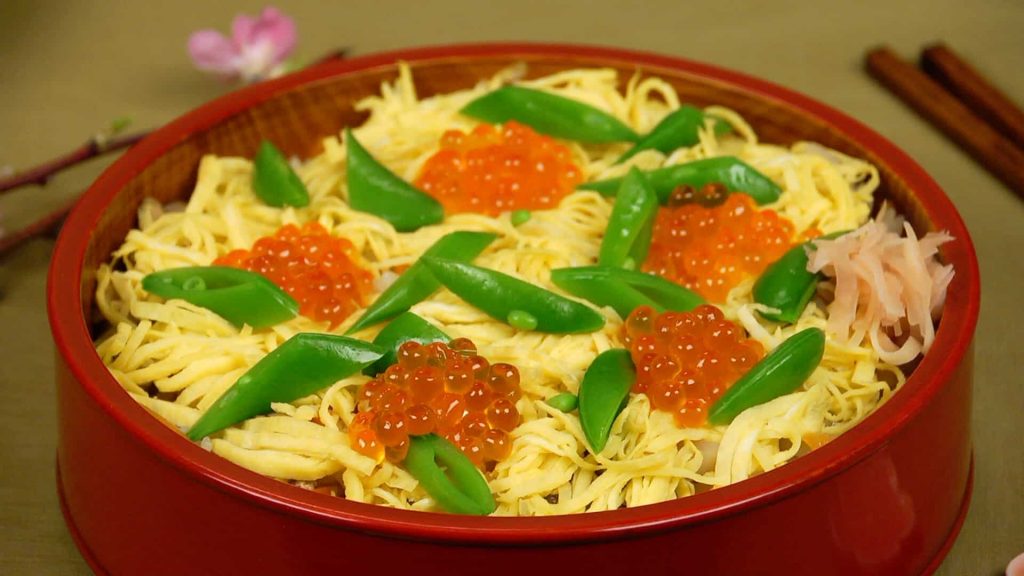 Chirashi Sushi, or “Scattered Sushi”, came to be known along with Maki Sushi around the 18th century. Another name for it would be “sushi rice salad”, for it resembles both sushi ingredients made into a salad.  The recipe is quite simple, with ingredients are scattered or topped on sushi rice with no rolling or shaping involved. This is a type of sushi dish that are perfect for families, at home preparation and is a perfect dish to make use of leftovers that are available. 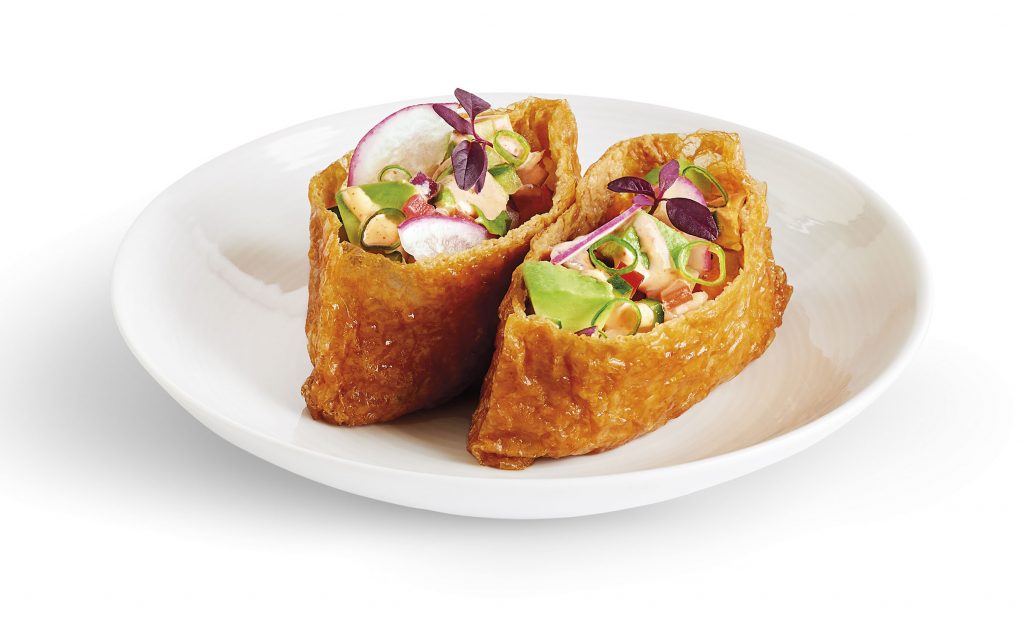 Inari sushi is made by filling in seasoned fried tofu with rice mixed with vinegar. This type is particularly popular for children in the family, for it has an unexpected salty and sweet taste at the same time. Toppings for this vary from sesame seeds, pickled cherry blossoms to kinshi tamago (thin egg crepes). Inari sushi was named after a Shinto God, Inari who is said to be fond of tofu. 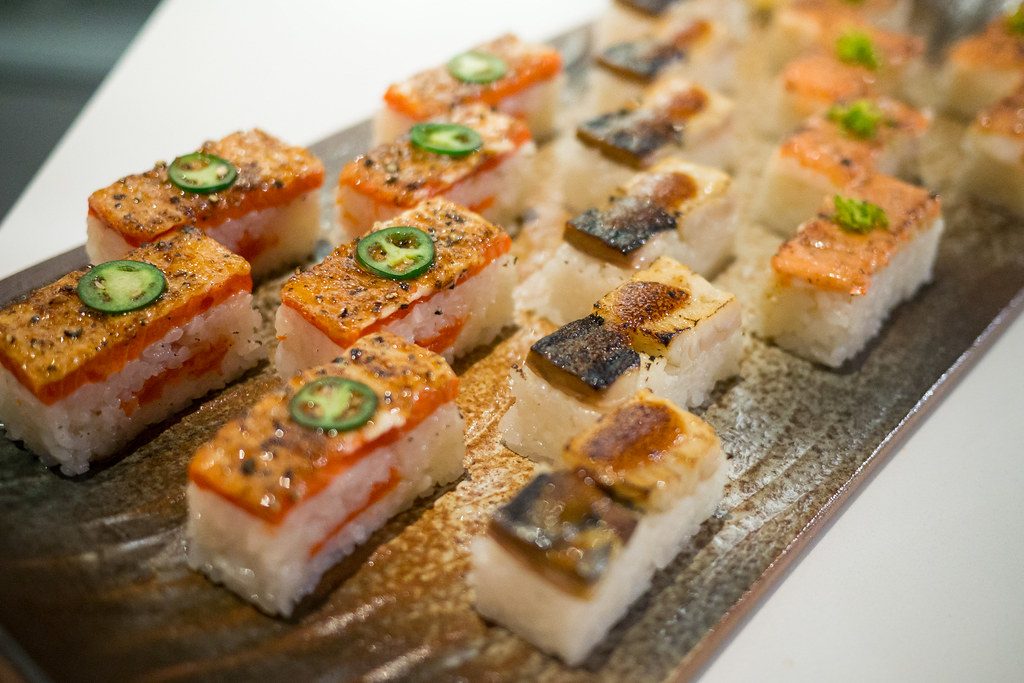 Oshi Sushi or Oshizushi is a type of sushi from Osaka, Japan. The literal meaning of it is “pressed sushi” or “box sushi” for the process to which it was made. Compared to other forms of sushi, this is the oldest forms of sushi and preserving fish, in which the fish is packed tightly into boxes with fermented rice. Traditional molds are made out of wood, mainly cypress or cedar, similar to that used for the Japanese sushi rice mixing tub (or Hangiri). Cheaper variations are usually made out of pine. 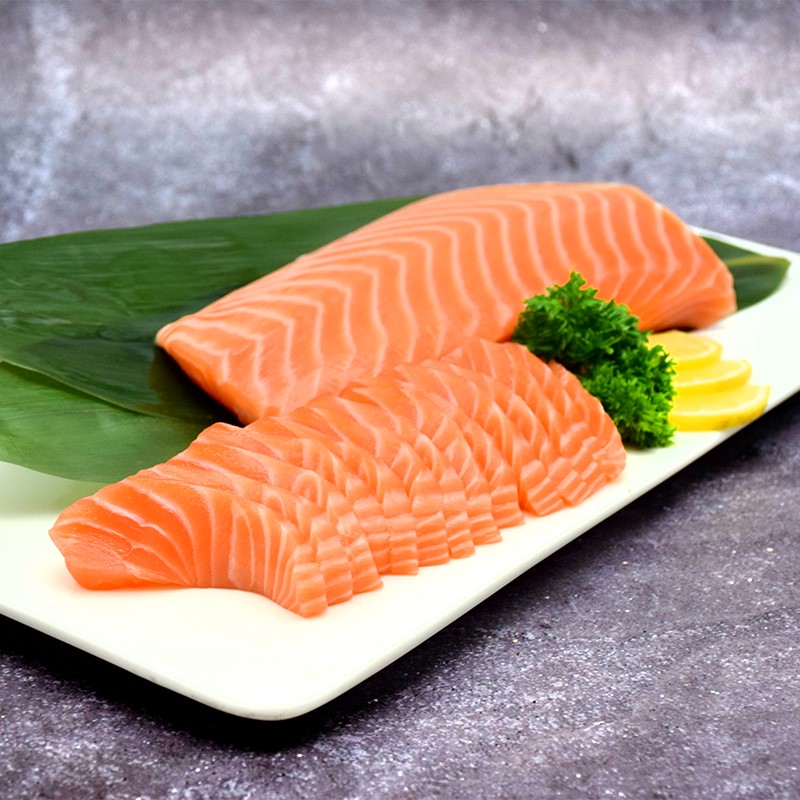 The word sashimi means ‘pierced body’, where ‘sashi’ means pierced and ‘mi’ means body or meat. It can therefore be defined as a piece of meat of any kind that is cut, draped over garnish like daikon (Asian white radish shredded into long strands) and accompanied with one perilla leaf per slice.

There are two types of sauces which sashimi is most often served with; the first being soy sauces with wasabi paste; and the second being ponzu sauce (sauce made by mixing soy sauce, lemon juice, rice vinegar, dashi, and mirin).

What to Eat it With

Sushi is usually eaten with three different types of condiments: 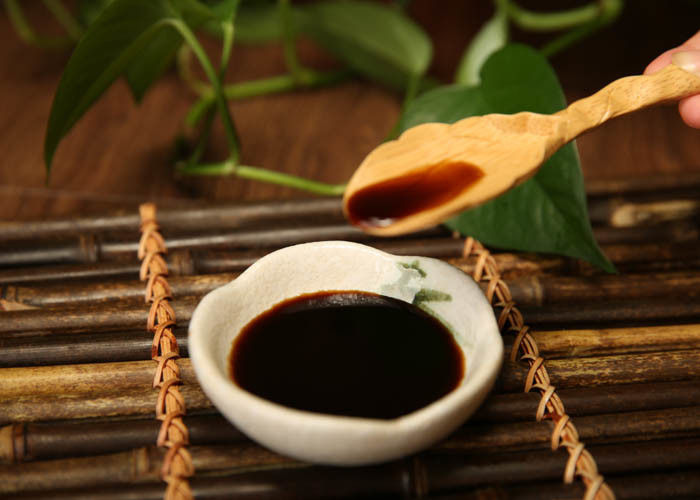 Almost all types of sushi are eaten with soy sauce, save for a few that don’t. Pour some soy sauce into a tiny round dish and dip your sushi there before eating.

Not many know this, but there is a special way of dipping the sauce. Makizushi can be dipped anyway you can, but nigirizushi is different. Take the sushi by the chopsticks (or hands), tilt and dip the fish in the sauce. Take a bite and enjoy the taste of salted fish and rice with vinegar. 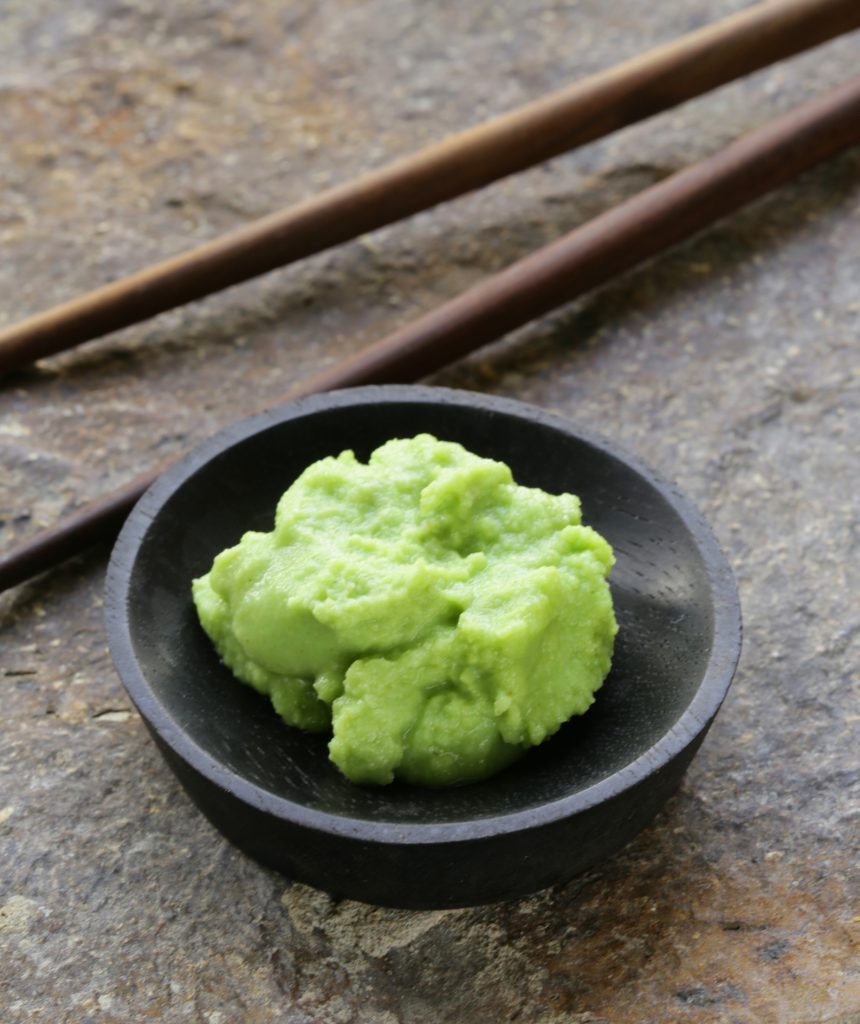 For a bit of kick or spice for your sushi, you can add in green paste called ‘wasabi’ or ‘Japanese horseradish’. Wasabi can be added any way you like from mixing with soy sauce and eaten solo. Other than adding flavor to your nigirizushi, wasabi also reduces the risk of food poisoning. Unfortunately, the taste can be a bit much for Japanese people and foreigners alike. 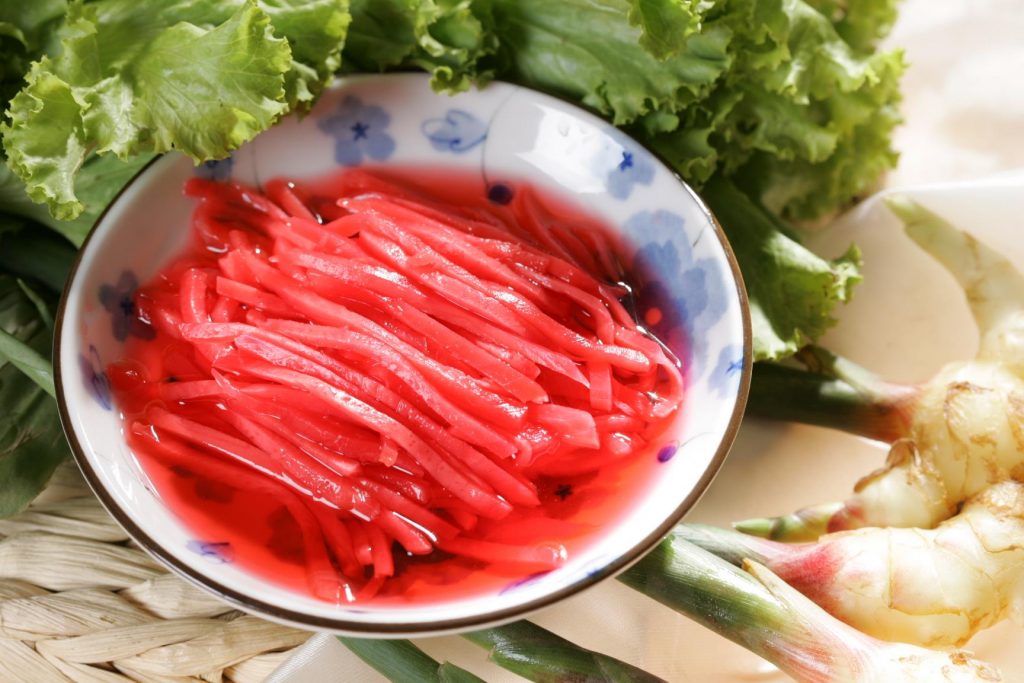 Other than wasabi, another condiment you should know about is shoga (also called gari), or pickled ginger. Many avoid this is due to the spicy flavor, although it has numerous benefits like having antibacterial properties and can be eaten to cleanse your palate. Surprisingly, it can even be eaten to lower down the spiciness of wasabi itself!

After finding out the types of sushi there is, we guarantee you will find sushi to be much more appetizing. Different sushi types are each meant to be eaten differently, giving a different sensation if paired with different condiments. For that reason, finding out more about sushi will most definitely increase your love of sushi.

Which sushi is your favorite? Share your answers in the comments section below.