Home Life Life Tips Earth Hour, Our First Step to Save the Earth 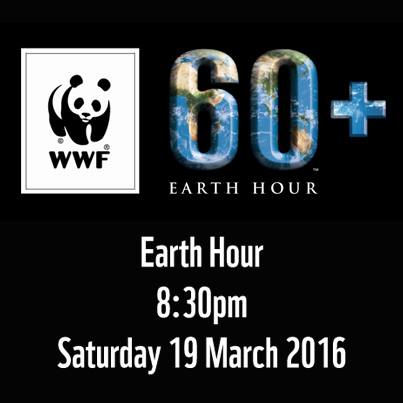 You may be familiar with Earth Hour.

Earth Hour is a worldwide movement that unites people to protect the planet, and is organized by World Wildlife Fund (WWF). It was started as a lights-off event in Sydney, Australia in 2007. Since then, it has grown to engage more than 7000 cities and towns worldwide. The event is held worldwide towards the end of March annually, encouraging individuals, communities, households, and businesses to turn off their non-essential lights for one hour as a symbol for their commitment to save the planet.

Earth Hour 2016 will be held on Saturday, 19 March between 8.30PM and 9.30PM local time. Earth Hour is not a blackout—you can still turn essential lights in your house on.
Earth Hour can be our initial step to save the earth. But, don’t do the movement on Earth Hour only. All we need is sustainability, consistency of doing what we can to save the earth. We can continue the Earth Hour movement by doing small yet impactful things and inspire other people to do so.

As Jakartans, you can do these things to make impact and save the earth:

Since the end of February, supermarket and convenient stores in Jakarta charge Rp200 for a plastic bag, big or small. The movement was started on the Hari Peduli Sampah Nasional (HPSN) 2016, 20th February 2016. The movement aims to reduce the amount of plastic waste, which needs 500 to 1000 years to decompose. This also encourages people to stop littering by bringing their own reusable bags whenever they go shopping. This small step, if done consistently by everyone, will also help to save the earth.

Using public transportation in Jakarta will not only reduce traffic jam, but also reduce the vehicle exhaust. If more people use private vehicles, chances are air pollution will be increasing. Cars emit greenhouse gasses, such as carbon dioxide, which contribute to global warming. Nitrogen oxides and sulfur oxides are major contributors to acid rain, which changes the pH of waterways and soils and thus can harm the organisms that rely on these resources.

According to city-owned water operator PD PAM Jaya Jakarta, demand for clean water in the capital city in 2015 reached 29,474 liters per second, but the production capacity only reaches 17,875 liters per second. During dry season, there are also several parts of Jakarta that suffer from drought. To keep the water supply and quality of water itself, it is important that we use water wisely and not waste it. You can collect the rainwater in a special tank and use it for watering the plants or cleaning your bathroom, for example.

This may seem impossible, because there are only few parts of Jakarta that can be planted. Not all houses have yard where we can plant trees or other plants. Don’t worry, you can still trick it. Plant your favorite plants—flowers, houseplants, whatever you like—in pots and place it at the spot where it can get enough sunlight. Plants extract carbon dioxide and exchange it with fresh oxygen, thus it can enhance air quality around your house and in the long term, save the Earth.

Saving the planet can’t be done overnight. It needs consistency and commitment to do things that help to save the planet. It can’t also be done by one person. That is why we need to start by ourselves and tell other people to live in a ‘greener’ way. Maybe we can’t see the result of what we done today—but our children, grandchildren will have a better life and environment in the future. Let’s start from this year’s Earth Hour to make an impact to our planet.