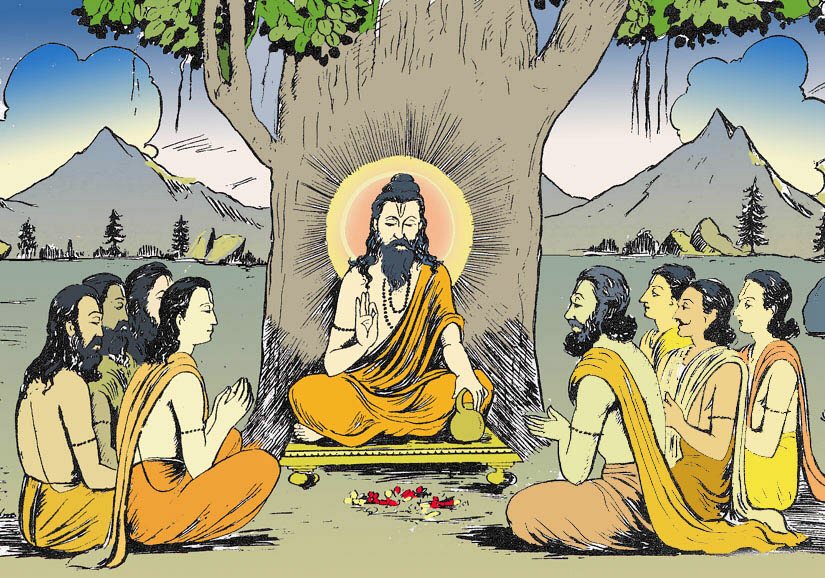 Atharvaveda says “Eko Brahm ——–.”means God is one who creates the Universe and there is no other God even equivalent to Him. After creating the Universe God has blessed us with the best education in the form of four Vedas wherein Yoga Philosophy along with so many other thousands of duties have been preached to be accepted by all human beings for a happy life. However,when a question of maintaining/promoting Indian Culture arises dresses, folk and classical music, literature in several languages and other more items are naturally deemed essential to be considered .

But now a days it has been a matter of sorrow that the most ancient and authenticated Indian culture i.e. ,Yoga philosophy preached in four Vedas and still kept in the world’s library has been over sighted by one or the other reasons. This invaluable world fame culture used to be studied and adopted in daily life only by our forefathers like Lord Manu, Rama , Krishna, kings like HarishChandra and Yudishtra etc. By virtue of which they realized the truth, looked after the people nicely and properly and thus at last attained salvation i.e.,the main motto of life.In this way they have left behind a traditional auspicious deeds to be adopted by the following generations, essential for a long happy life and not the worst one usually seen now a days. Tulsi and Valmiki ji have stated this fact in their Ramayans about the happy life of the public of ancient times specially for Lord Rama also.They have awared Lord Rama with special quality- ” SHRUTI PATH PALAK” . Shruti means four Vedas i.e .Rama had been adopting his every step of life in accordance with the auspicious deeds like Yajna,Yoga Philosophy and to rule the Nation judiciously etc.,all preached in four Vedas.Therefore very rightly it has been a truly proverb of our great India that India by means of only said Vedic culture had been a pious Earth to generate Rishis/ Munis/Yogis and used to be called a world’s spiritual master and Golden bird. Now we come again on the culture .In previous series(Lecture 4) we were considering a word “Ashwa.”. Now a days the worldly meaning of word Ashwa is “Horse”. But its divine meaning is –

“ASHWA VAHI RASHTRAHA” i.e., Ashwaha means Nation. This divine meaning is mentioned in ancient Brahaman holy book written by Yask Muni . In all the ancient holy books like Maha-Bharat And Valmiki Ramayana etc., this word has been used stating that all the kings and people of ancient time like Lord Manu , Rama and Krishna used to organise/ perform several Ashva Megha yajnas in presence of Rishis/Munis for the benefit of Nation /Public. Because they knew its beneficial results in providing them with timely and pure rain, increase in crop productivity, purify water/ air , killing pollution, generating huge/ vast jungles with several kinds of trees/ vegetable/ herbs providing food to animal /birds etc, thus further increasing more milk and other pure foods to human life and too promoting international brotherhood with other thousands of benefits to the human beings. This word Ashwa has also been mentioned in Tusli Das’s Ramayana as “KOTI WAAJI MEDH PRABHU KINE”. Here waaji means ashwa and ashwa means nation i.e Shri Rama did more than crore Ashwa Megh Yajna for public benefits. In these holy Yajna, the preach of yoga and other instigated deeds used to be spread by the then Rishis . Valmiki ji thus ,very nicely ,has stated that in those days every family member was seemed to be as learned as a Maharishi.

Now our country is lack of such kinds of Rishis like Vyas Muni, Shringi Rishi, Atri Rishi, Guru Vashishta, Yogi Patanjanli, Kapil Muni and Kings like Dashratha,Harish Chandra,Shri Rama,Shri Krishna etc., who knew full knowledge of Vedas and yoga philosophy .So it seems to be a difficult task to promote proper Yoga philosophy and other instigated deeds/duties for public benefits. Again in Athrava Vedas Mantra 9/4/4 Vrishbhah has been used clarifying that when a cow delivers a calf, it should be nursed carefully so that the calf will be cause of healthy generations from cows in future.In this way the cow will be providing us with pure milk/butter/ ghee to promote good health of the citizens. But it has been a misfortune of our country that ,likewise the meanings of thousands of divine words of the vedas including Yoga, have been narrated false and used totally in the bad sense since long resulting inability to understand the true Yoga education preached in Vedas and adopted by our forefathers . This has certainly happened too in absence of the traditonal preach of the learned Rishi/ Yogis who knew Vedas.In this connection Atharva Veda mantra 7/2/1 truly states that, only a Rishi /Yogi knowing Yoga Philosophy briefed in Vedas and has attained the stage of Samadhi (final liberation) due to the hard practice of Ashtang Yoga, is capable to dig out the factual meaning of the divine words like Yoga. The words i.e., Horse and Ox have been spread and made known unauthentically in the form of killing Horse and Ox using their meats while performing holy Yajna whereas in whole of the Vedas in the matter of worship /spiritualism there has been no space left for violence. And what to say, where in Vedas the “Nar-Megh Yajna” has been preached for cremation of the dead bodies to avoid spreading bacteria of diseases harmful to the humanity.

But it has also been misinterpreted like Ox and Horse that in the holy Yajna an alive man should be slaughtered. Due to these baseless and false statements Indian Vedic philosophy containing Yoga knowledge and other preach concerning the auspicious deeds for human beings was made ruined.That a nation only stands and progresses due to its culture only .. We remained slaves for thousands of years .. During this period the Vedic
culture has been disappeared.That is why ,now a days most of the Sadhus/saints have started telling that Yajna and Yoga Education are not required in married life and even not required at all.To some extent they have even started denying Yoga/Vedas without knowing the same,with the remarks that these educations are difficult.In this regard Guru Nanak Dev ji states that do not tell that Vedas are false ,he is liar who does not study and does not know Vedas.We must recollect that our forefathers,Rishis/Munis, even Lord Rama , Krishna including all the Public of the ancient time did Yoga and Yajna and adopted the same a Vedic culture as the best education in their life like:-

So the Indian Vedic culture concludes that Yoga is only the best way to achieve the life target of realizing God and even to do auspicious deeds in family life to be a good citizen to establish a strong Nation. Now we come to the point to brief the Vedic Yoga philosophy.