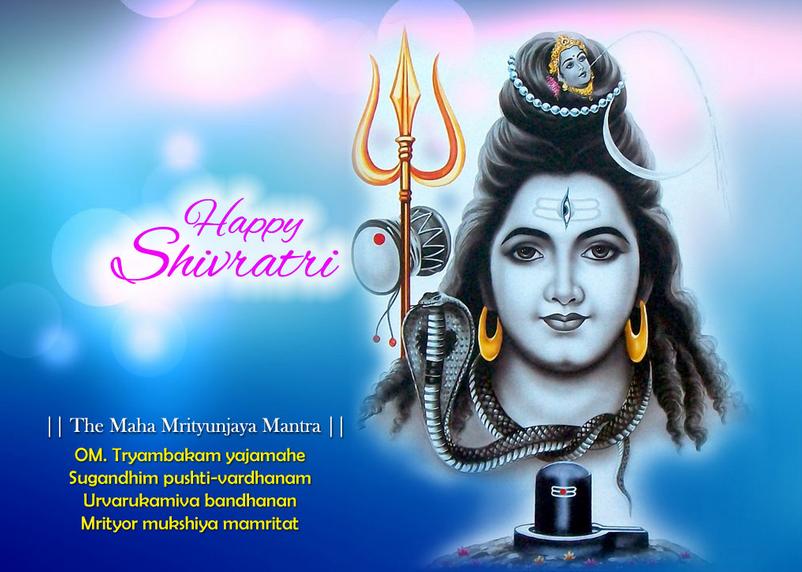 Mahashivartri celebrates the Lord of the lords, the mightiest of all Gods – Shiva. ‘We conceive God as glory, as creativity and as austerity. Vishnu is glory and magnificence; Brahma is creativity force; and Siva is austerity and renunciation’ as explained by Swami Krishnananda

Maha Shivratri is celebrated between the 13th night and the 14th day of the Hindu calendar month of Phalguna or Maagh, with offerings of Bael leaves to Shiva, all-day fasting and an all-night-vigil (jagaran). All through the day and night, devotees chant “Om Namah Shivaya”, the sacred mantra of Shiva. Penances are performed in order to gain boons in the practice of Yoga and meditation, in order to reach life’s highest good steadily and swiftly. On this day, the planetary positions in the Northern hemisphere act as potent catalysts to help a person raise his or her spiritual energy more easily. The benefits of powerful ancient Sanskrit mantras such as Maha Mrityunjaya Mantra increase greatly on this night.

The origin of Shivaratri is attributed to several stories in Hindu mythology and Puranas describing the origin of this festival.

The most common story is that it is the day when Lord Shiva married Goddess Parvati.

Another story is of the churning of the ocean of milk or the samudra manthan, a pot of poison emerged from the ocean. This terrified the Gods and demons as the poison was capable of destroying the entire world, and they ran to Shiva for help. To protect the world from its evil effects, Shiva drank the deathly poison but held it in his throat instead of swallowing it. This made his throat turn blue, and he was given the name Neelakantha, the blue-throated one. Shivaratri is the celebration of this event by which Shiva saved the world.

The learning and philosophical essence of the above myth is that gods and demons symbolize the different people (both good and bad) in the world. The Ocean of Milk represents the ideal world that is full of peace and happiness for all humanity. Churning the Ocean of Milk signifies the human activity in the world. The amrita or nectar symbolizes happiness and the poison represents human greed and selfishness. Shiva symbolizes the atman (self), the spiritual essence of an individual. Worship of Shiva denotes meditation and contemplation by an individual on his or her own self.

Yet another legend in the Shiva Purana is about the Hindu Gods – Brahma and Vishnu, were fighting over who was the superior of the two. Horrified at the intensity of the battle, the other gods asked Shiva to intervene. To make them realize the futility of their fight, Shiva assumed the form of a huge column of fire in between Brahma and Vishnu. Awestruck by its magnitude, they decided to find one end each to establish supremacy over the other. Brahma assumed the form of a swan and went upwards and Vishnu as Varaha went into the earth. But light has no limit and though they searched for thousands of miles, neither could find the end. On his journey upwards, Brahma came across a Ketaki flower wafting down slowly. When asked where she had come from, the Ketaki replied that she had been placed at the top of the fiery column as an offering. Unable to find the uppermost limit, Brahma decided to end his search and take the flower as a witness.

At this, the angry Shiva revealed his true form. He punished Brahma for telling a lie, and cursed him that no one would ever pray to him. The Ketaki flower too was banned from being used as an offering for any worship, as she had testified falsely. Since it was on the 14th day in the dark half of the month of Phalguna that Shiva first manifested himself in the form of a Linga, the day is especially auspicious and is celebrated as Mahashivaratri. Worshipping Shiva on this day is believed to bestow one with happiness and prosperity.

Mahashivaratri is thus not only a ritual but also a cosmic definition of the Hindu universe. It dispels ignorance, emanates the light of knowledge, makes one aware of the universe, ushers in the spring after the cold and dry winter, and invokes the supreme power to take cognizance of the beings that were created by Him.