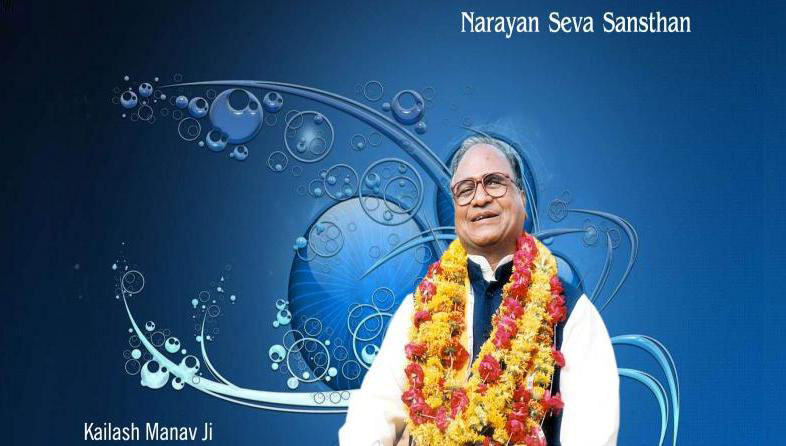 Shri Kailash Chandra Agrawal or Sadhu Kailash ‘Manav’ as he is fondly called is the Founder Chairman of Narayan Seva Sansthan which has changed the lives of many thousands of people through his humanitarian and philanthropic efforts.

He was awarded the Padamshree Award in Social Service by Honorable President Smt. Pratibha Patil on 5th May 2008, as well as many other prestigious renowned State and National Level Awards in recognition of his noble service to humankind.

Narayan Seva Sansthan was formally established in 1985 and head quartered in Udaipur, India to provide free of cost services in treatment and rehabilitation of Polio and people disabled by birth (such as mentally retarded, deaf & dumb, blind, hole in the heart, cardiac problem) without any discrimination on the ground of religion, region, caste, sex etc.

This foundation has now grown to branches across 167 countries to provide many free services which have helped over half a million people till date and include:

At Narayan Seva Sansthan more than 253,000 corrective surgeries have already been done, 3500 diagnostic and 500 surgical camps have been organized for selection & treatment of Polio and by birth disabled and more than 1000 poor & disabled young couples have started new lives through mass wedding ceremonies, and all these activities are still continuing

How did this all start, I asked Mr Kailash Choudhry, NSS Pracharak, who is currently visiting Jakarta. After all, all great deeds start with a seed.

Mr Kailash narrated that Kailash Chand Agarwal ‘Manav’ was a witness to a dreadful road accident near Pindwada of Sirohi District in May 1976. In the accident forty persons were badly injured, of which some passed away while others were shifted to the hospital. Manav ji actively helped the accident victims in his individual capacity and was very touched by the plight of the poor patients. One such incident was when one of the patients ate only one of the three rotis provided at meal times so that he could share the other two with his hungry relatives. This led to Manav ji going from door to door on his bicycle and asking for a handful of atta (wheat flour) and making rotis every morning to distribute to the poor at the hospital.

From that humble start NSS has grown to 17 Hospitals having 1100 Beds with operation of 100 persons per day. It has one of the best Hospital in North India where 2,08,000 patients are operated Free Of Charge till date for Polio & Disability – suffering from various limb disease.

All the services of the trust are free of cost and the Sansthan is entirely run by the donations it receives. All the treatment, welfare and rehabilitation activities of Sansthan are being made possible only because of the generosity extended by the people all across the world in the form of donation.

You too can contribute to this noble cause:

Mr. Manav has been serving the mankind through his social trust, Narayan Seva Sansthan which was established on October 23, 1985. The Sansthan is well known today all over the world. Mr. Manav has put great efforts in bringing up this trust for the help of poor, needy and helpless people of society. He is a example of how each of us has the power to make a difference.

Mr YS Lodha is supporting this cause in Jakarta and can be reached via email at yslodha@gmail.com