Fear lasted for only a second just before I jumped off the cliff! And then I was airborne with the breeze in my face and the wonderfully green Pucak valley spread out below me a 360 degree panorama. Have you ever found yourself following birds in the sky skimming effortlessly on the currents of the wind and wondered what it would be like? I found the answer in paragliding, the easiest and most enjoyable method of “sharing the air” with the birds. Soaring like an eagle, a dream come true.

Bukit Paralayang,or paragliding hill, is just above the big mosque in Puncak. It is the main spot for paragliding and the base camp for many paragliding clubs and enthusiasts. It is a mere 1 hour drive from Jakarta in the early morning weekday traffic. We were amazed that we had not discovered this spot in all our years in Jakarta. The hilltop commands a wonderful view perched like an eagles eyrie, with a birds eye view of Puncak. A perfect picnic spot with lovely walks and the best, fresh ‘gorengan’.

We reached there early at 9am for our first flying experience in tandem with Nixon Ray and David A. Teak ‘Opa’, paragliding instructors and professionals. Check out their site at (http://www.indonesia-paragliding.com) There were 9 of us and all raring to go but we had to wait till the sun had warmed the valley to provide a good updraft for the paragliders. The windsock hung sadly while we tried to amuse ourselves exploring the walking trails.

Finally at noon the windsock was flying happily in the wind and we gathered at the edge where the instructors had the equipment ready for us. The plan was to go in tandem with the 2 instructors, land at a predesignated spot in the middle of tea gardens marked with a large ‘Bull’s eye’ and then come back up in a van with all the equipment for the next run.

Tandem flights use a wing large enough to hold two people, a pilot / instructor and a passenger. Each person has their own harness, which are attached together, with the passenger in front, and the pilot right behind. A tandem gives you the chance to experience a flight above the beautiful hills and tea gardens without any training or experience for 10 to 15 minutes. An experienced solo flyer can stay in the air using the thermals and air currents for much longer.

We were strapped in a harness and carried a large backpack, which doubles as a seat while in the air, and a helmet. Once strapped in with our guide and the silk spread out behind us with a million strings, we were ready to take off. It is quite a feat to run with the heavy backpack strapped to the guide and jump of the short metal ramp into the air. We had wait for the updraft and two aborted runs later finally, I was in the air. When the wind is right we built energy by running together as the wing came overhead into the flying position we were lifted of the ground, up, up, and away! The backpack became weightless and I was comfortably seated on it while the wind blew all around me. I forgot all about my guide David, and was overwhelmed by feeling of freedom and the silence. We spiraled up and it was beautiful soaring like a bird with the green mosaic earth far below.

Time seemed to stand still while we flew over the densely forested slopes, tea gardens, curving roads with regular traffic, gurgling streams and fields. Soon we were approached the landing site for a feather light landing bang in the middle of the target. Back on terra firma and I missed the feeling of lightness.

The crew on standby quickly folded our gear and piled it into the waiting van and we set off back for the next lucky flyers. So, was it scary? And the answer is “NO” – It is a gentle adventure, once airborne the experience can be serene, quiet and peaceful. A wonderful ‘personal flight’ experience.

Additional Info:
Wikipaedia defines ’Paragliding as a recreational and competitive flying sport. A paraglider is a free-flying, foot-launched aircraft. The pilot sits in a harness suspended below a fabric wing, whose shape is formed by its suspension lines and the pressure of air entering vents in the front of the wing.” 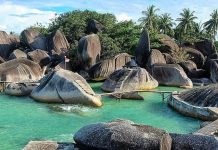