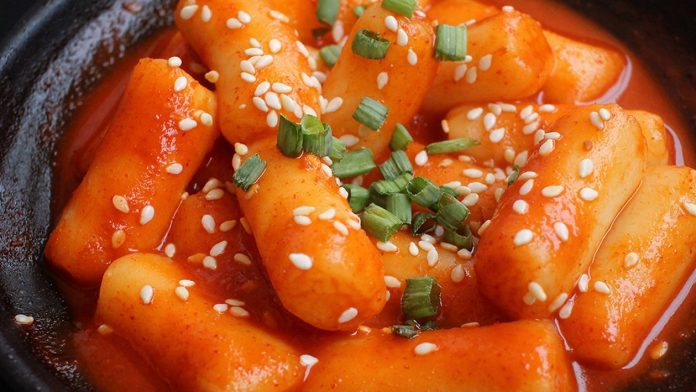 Tteokbokki or ‘stir-fry rice cakes’ is a popular street food that originates from South Korea. Made from anchovy broth, gochujang (Korean chilli paste) and honey, this dish is a cornucopia of flavors from pungent, spicy, savory and sweet all at the same time! Due to its wide variety of tastes, it can also be considered a comfort food when you want to relieve your stress and feel comforted. Try it out!

The first version of tteokbokki was the Gungjung-tteok-bokki, which was served in the Joseon-era royal court and uses beef, various vegetables, and a soy sauce base. The spicy version of tteokbokki only appeared in the 1950s when a woman named Ma Bok Lim who participated in the opening of a Chinese restaurant dropped tteok into hot sauce. She found it to be so delicious that she began selling it in Sindang area. On the other hand, Koreans can also order ra-bokki which is served with the addition of instant ramen noodles in a soupier base.

Ingredients for the tteokbokki:

To make homemade anchovy broth: Start by toasting anchovies lightly golden in a large port over medium-low heat and stir frequently for 2 minutes. Then add water, mushrooms, salt and bring to a boil over high heat. Reduce heat to medium-low and continue to simmer for 15 minutes. Remove from heat, then add in kelp and let steep for 10 minutes. Strain, reserving kelp, mushrooms, and fish for another use, if desired.

Meanwhile, if using hard, refrigerated rice cakes: Separate cakes if they are stuck to each other, then rinse in cool water and drain. Transfer to a large bowl and cover cakes with 3 cups of hot water. Let soak for 15 minutes, until softened. Drain and set aside.

To Make Tteokbokki: In a large pot over medium heat, heat oil. Add gochugaru, gochujang, garlic, soy sauce, vinegar, and honey and stir until combined and fragrant for 1 minute. Add 2 cups broth and bring to a boil. Add in soaked rice cakes and cook until cakes are tender and soft, stirring often for about 10 minutes.

Add in remaining broth as needed to loosen sauce and to desired consistency. Optionally you can add in fish cakes, green onions, and sesame oil, and cook until onions are softened for about 5 minutes.

Garnish with more green onions and sesame seeds before serving.

Have you tried cooking or eating Tteokbokki? Tell us in the comments section below!