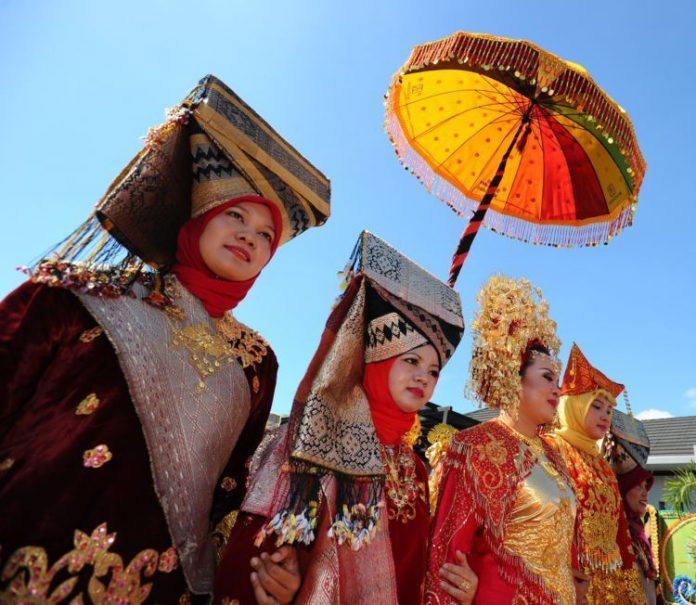 A wedding is an important milestone we all value in our lifetime. In Indonesia, weddings have traditions that are largely influenced by various ethnicities and regions. For that reason, the traditions and rituals vary. Yet some rituals are much more unique than others.

Here is a compilation of unique Indonesian wedding traditions: 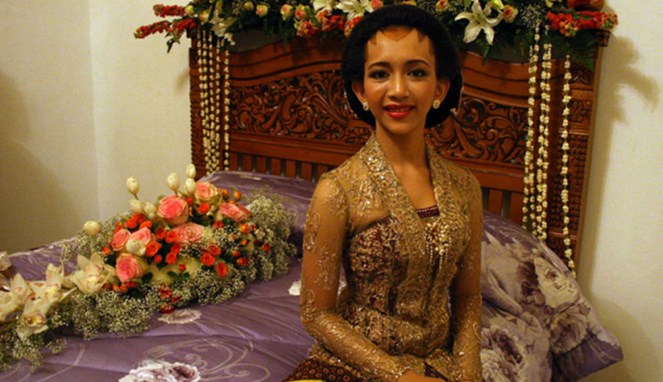 In Central Javanese culture, Pingitan or ‘seclusion’ is a tradition where the bride is not allowed to leave their house in a certain amount of time. During this time, they are not allowed to see the groom before the wedding ceremony is held. Many believe that this old tradition will bring benefits to both the bride and groom, as it’s intended to prevent any perils that can possibly happen to the bride. Besides that, it’s carried out to make the groom yearn more for the presence of his bride.

Towards the eve of the wedding, the bride will usually be preparing self-treatment for herself. This includes home-spa, fasting, and drinking herbal beverages and sometimes accompanied by close relatives, family or close friends. In the past, the longest period of time a bride can be secluded is up to 2 months.

Minangkabau: Proposing to the Groom 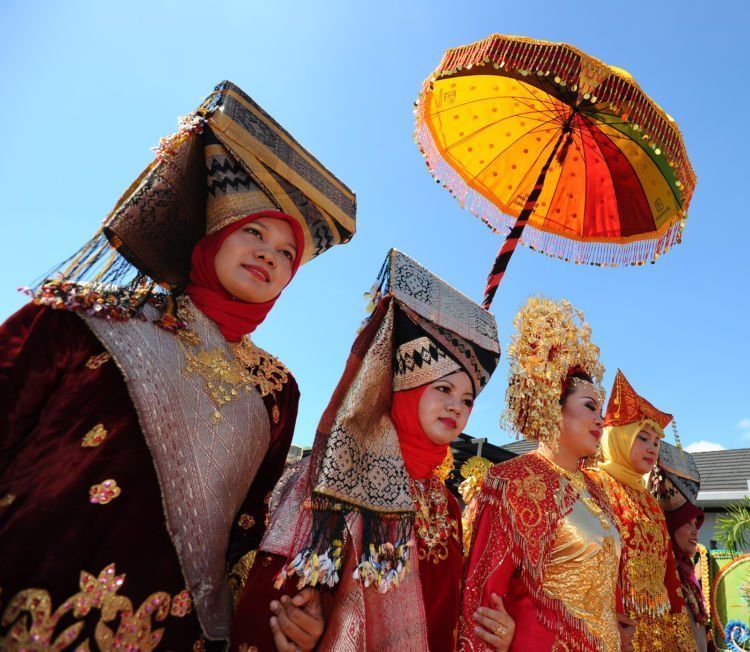 Unlike other wedding customs, the family of the bride in Minangkabau becomes the one to propose to her bridegroom. The first step is to visit the groom’s family. If the proposal is accepted, the two families will exchange heirlooms as gifts which works as binding symbols. They later continue the procession by bringing various sorts of food and fruit arrangements.

There are several stages of customs undergone if you marry in Minangkabau tradition. It starts from Maresek (family meeting), Maminang and Batimbang Tando (proposing and exchanging signs), Mahanta Siriah (asking for permission), and babako-babaki (bringing various items). This will be followed by Bainai night (polishing the bride’s nails), Manjapuik Marapulai (picking up the bridegroom), welcoming at the bride’s house and many more traditions after the ceremony. 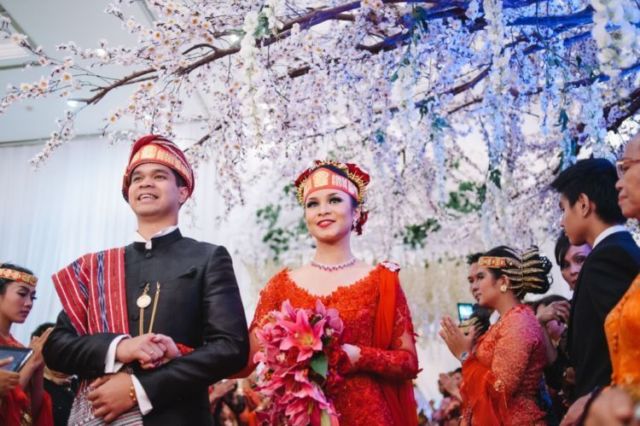 Sinamot is a marriage procession in Batak ethnicity regarding the negotiation of marriage dowry. The amount of the dowry given depends on social status, level of education and career from the woman’s side. For instance, women with university degrees will be honored with higher value compared to woman with high school graduate.

Meanwhile, education level is the major determinant for the groom. It is used as benchmark for the man to have higher education level as he will be able to support his future family. In conclusion, Sinamot is not merely about materialism but to avoid impending failures or divorce after a carefully planned and costly marriage. 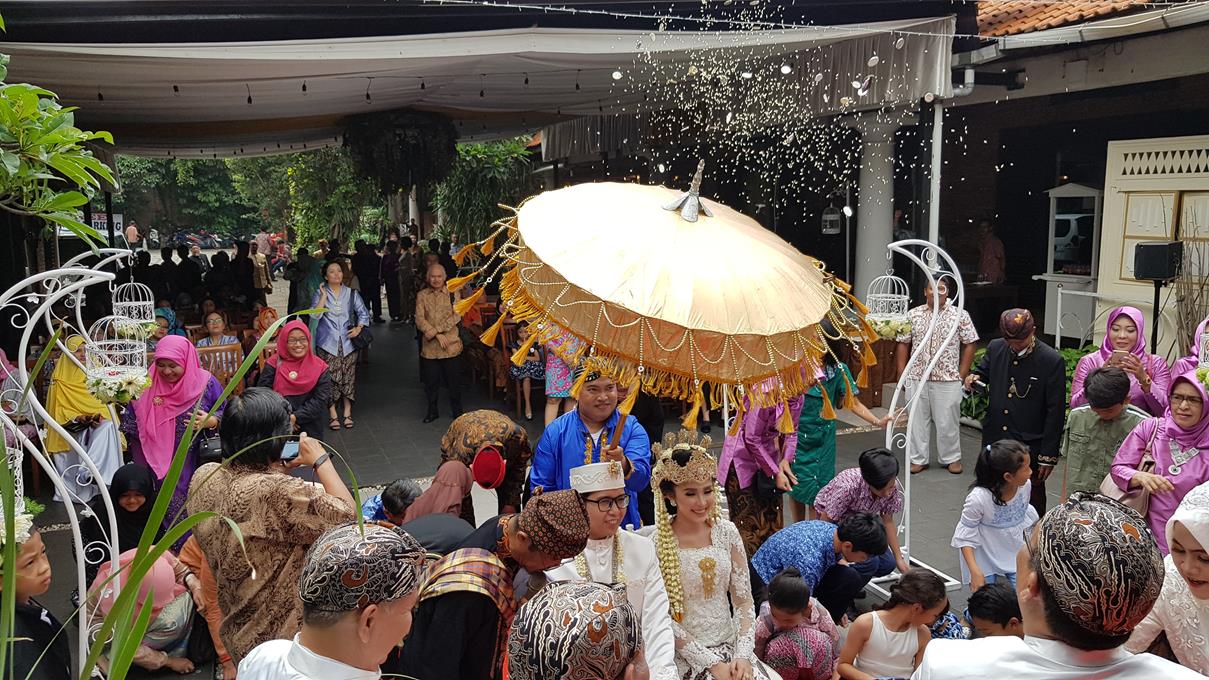 In Sundanese, Sawer means a spot where the water falls from tip of the roof. This tradition begins with poems sung which contains spiritual values for both bride and the groom. Afterwards the ceremony continues with couple receiving a bowl filled with coins, rice, candies, and turmeric.

Coins are epitome of hopes for material wealth, which the brides will share amongst the guests. Other than that, rice symbolizes prosperity in life, candies depicts sweet parts in life and turmeric is attributed to glory. The moment of Sawer is special, as it becomes the moment where the bride and the grooms receive their blessings from relatives. It also signifies that a parent’s affection and love will always be eternal towards the couple. 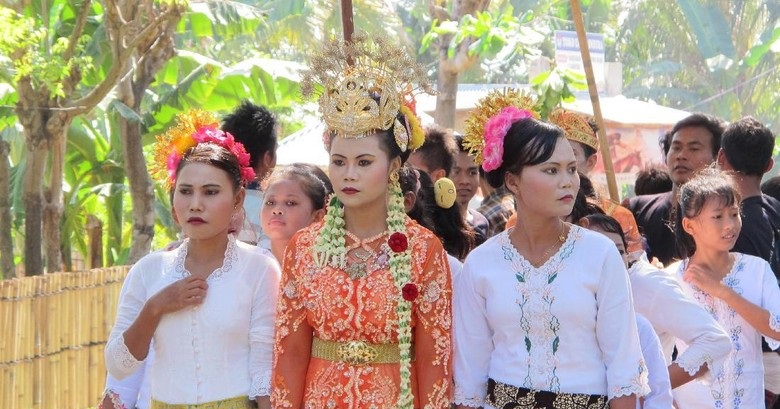 Another unique wedding tradition in Indonesia originates from Sasak tribe in Lombok. Before the wedding, the groom is to abduct the bride from her family. In the past, this tradition is similarly known as an elopement by those who marry in secret behind their family. Although the female’s parents already approved the marriage, the groom should not practice this custom carelessly as he has to pay a fine if caught.

At first, after being kidnapped, the bride will be living temporarily at the residence of the groom’s relatives. When the female’s parents know that their daughter didn’t return home, they will report it to the district head. Afterwards, the groom will visits her parent’s house to inform that their daughter has ‘eloped’. The next part of the procession will be discussed in details if both family parties agree to the wedding arrangement. 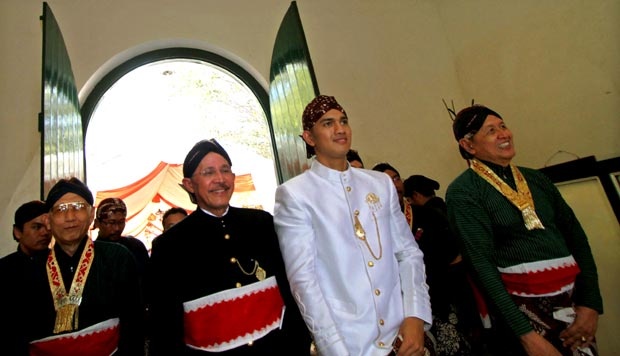 Contrary to Javanese Pingitan, the tradition of Nyantri from Yogyakarta’s Sultanate requires the groom to live in his bride’s residence a few days before the wedding. This is due to to the arranged marriage in ancient times where the bride and her groom are not familiar with each other. In the end, it could provoke one of the involved parties to leave the marriage.

To prevent any of that happening in the future, the groom is usually asked to stay close to his bride. This does not mean he will be sleeping at the bride’s house but to live in the relative’s houses or at her neighbour’s.

Which one of those do you think will suit you according to your wedding plans? Tell us your opinion in the comment section below!