Rich with tradition, fragrant, beautiful, and complicated are probably the words that describe a traditional Javanese wedding ceremony. It consists of a few processions, and each of it is a step in the creation of a new bound between two families.

The wedding is planned and prepared carefully as it entails many details and steps to do, no matter which ceremony is chosen. A small wedding committee is usually formed, containing close relatives and friends of both families. The size depends on how big the party has to be and on how many guests will be invited. In Javanese society, a wedding ceremony is a big show and reflecting the social status of the families. That is why sometimes families choose to borrow funds in order to make a huge wedding ceremony for their children.

The role of Pemaes, a traditional make-up artist who leads the whole ceremony is very important in any Javanese wedding ceremony. She will not only take care of the makeup and dressing of the bride and groom, but also the offerings needed and different kind of ceremonies during the event.

Actually there are several variations of Javanese wedding, depending on the custom and social status of the couple. Popular variation includes Surakartan, Jogjakarta, Paes Kesatrian, and Paes Ageng. The wedding rituals will include Siraman, Midodareni, Peningsetan, Ijab (for muslims) or wedding sacrament (for Christian). 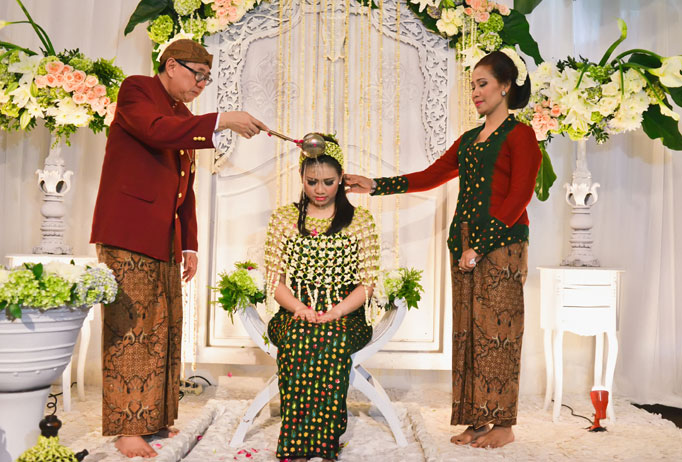 Siraman is derived from Javanese word ‘siram’ which means to take a bath. For the couple in Javanese wedding ritual, it means to become clean (their bodies and their souls). The Siraman ceremony is usually organized in the afternoon, one day before the Ijab rituals. Siraman for the bride-to-be is conducted in her parents’ house, and for groom-to-be is conducted in his parents’. The number of people giving Siraman is usually limited to seven. 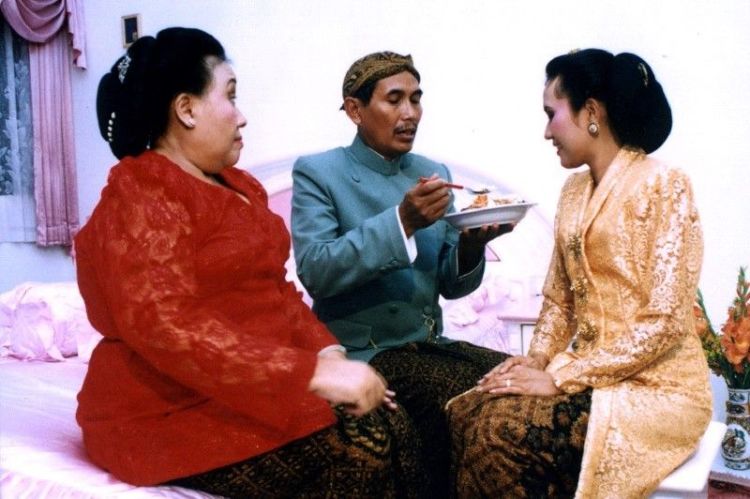 Midodareni is derived from the word ‘Widodari’ which means goddess. At the evening before wedding, the bride-to-be becomes as beautiful as a goddess.

The bride has to stay in the room from 6pm to midnight accompanied by some elder women giving her useful advices about life. The family of the groom and her close friends should also visit her for a while and all of them must be women. This is also the time when the bride’s parents have a dinner with their daughter for the last time, as from tomorrow she will be taken by her husband. 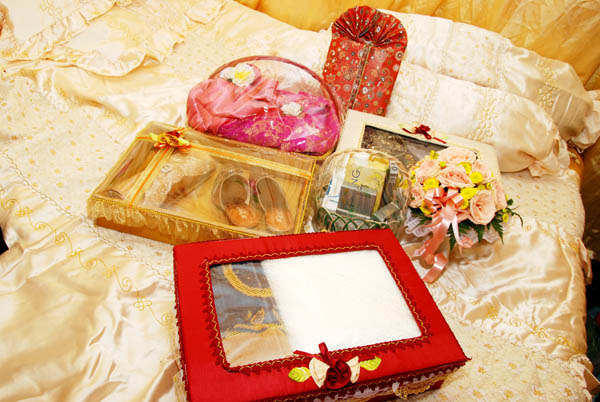 Peningset or Srah-srahan is derived from the word ‘singset’ meaning ‘to tie up’. This procession is usually conducted during or after Midodareni. On this occasion, the groom’s families visit the family of the bride and bringing some gifts such as Suruh Ayu (beautiful betel leaves), several batik cloths with different patterns, kebaya and makeup, white waist sash for women, fruits, staple food (rice, sugar, salt, cooking oil etc), and a set of rings for the couple.

The groom cannot visit the bride at the decorated wedding room. The groom would arrive together with his families, but he is not entitled to enter the bride’s house. He should sit at the veranda of the house accompanied by some friends and relatives, and he is not allowed to eat until after midnight. After his family leaves the house, the groom is allowed to enter the house of the bride, but not the wedding room. 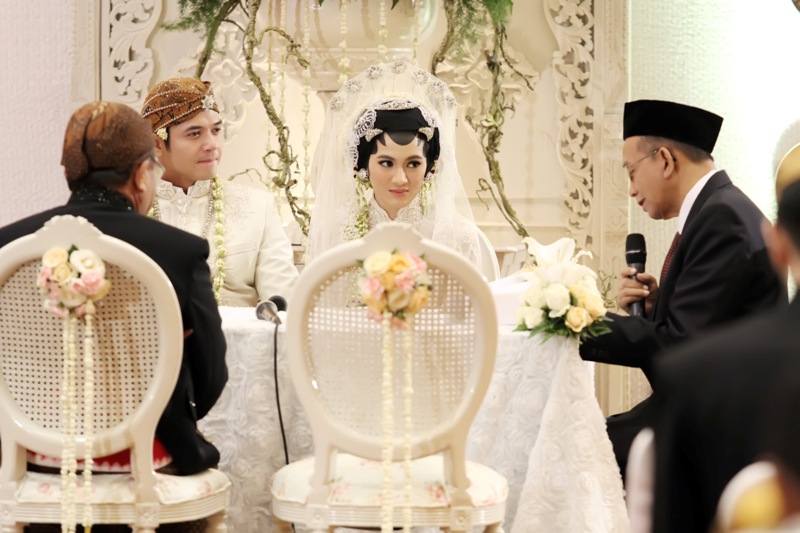 The Ijab ceremony is the most important requirement to legalize a marriage, and the implementation is in accordance with the religion of the couple. At the place of Ijab, a Sajen (offering) is put. The bride wears traditional makeup and gelungan (bun), golden jewelries and a special Kebaya (traditional clothes for Javanese women) for this occasion. The groom also wears a special dress for this ceremony.

Panggih or Temu (means meeting) is the time when the bride and the groom finally meet each other. The meeting is accompanied the sound of Gamelan and located in front of the bride’s house. There are several processions in Panggih, such as:

After the entire traditional procession, usually a wedding reception will follow. The theme of the reception can vary, a Javanese-themed reception is not mandatory.

The Javanese wedding ceremony, like other traditional wedding rituals from around the world, is magical. It is a very sacred moment when two different persons from two different families are tied in a sacred marriage bond. It’s also a sign of a new phase in life for the couple. And on top of that, a complete Javanese wedding ritual like this is one of the way that Indonesians preserve their culture.