Home Contributors An Amusing Glance Into the World of Acronyms 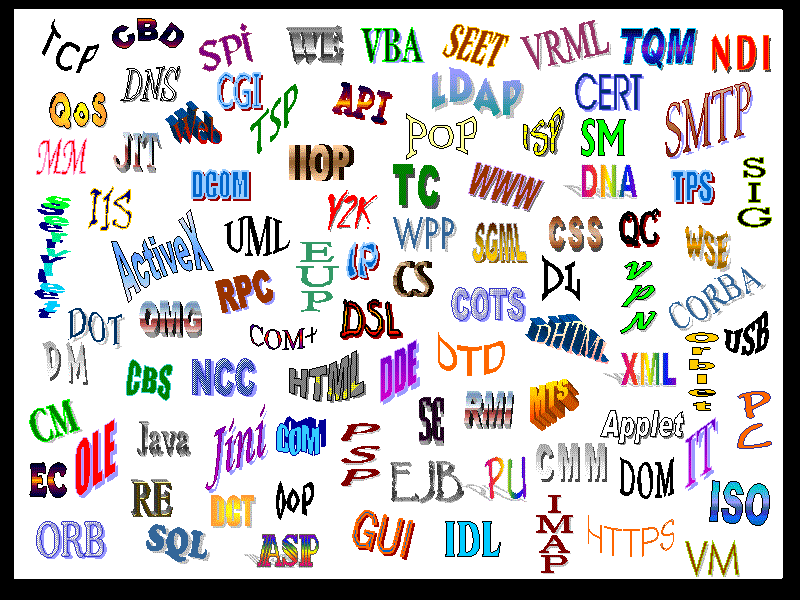 An acronym is an abbreviation made from the initial letters of a term or phrase. Acronyms are intended to facilitate communication and quick understanding. They are too important to ignore in this modern world.

A word to the efficient is sufficient. But are we efficient enough to interpret the true meaning of all the acronyms that are in circulation? Furthermore, how do we unravel the mysteries of new acronyms, which are proliferating like mushrooms every day? Acronyms are convenient for communications to be sharp and swift. However, it’s time we had a reliable source, (perhaps, a pocket size computer), containing an accurate description of all the acronyms, which are in day-to-day use.

Acronyms never fail to fascinate me. It seems that the most creative people are those who are engaged in the field of coining new acronyms. Let’s consider the following, where their imaginations have indeed run riot!

COBRA
Clear Over Base Rapid Application (An automobile paint)

FOREST
Freedom Organization for the Right to Enjoy Smoking Tobacco (Should the chain-smokers, who ignore the health of others, be exiled to the forest ? No, on second thoughts, let the plants and trees live – they need to be preserved for future generations!)

NEAR
Near Earth Asteroid Rendezvous (First spacecraft to orbit an asteroid)

SITA
Suppression of Immoral Traffic Act (A crazy acronym, only Indians are capable of inventing!)

STYLE
Success Through Your Life Enrichment

WATCH
Women and Their Children’s Health

A Monday edition of The Jakarta Post carried the following acronyms: MGA, VRAM, MPEG, EDO RAM, AMD, WRAM, NASCAR, SoftPeg. In case readers are confused, let me hasten to say that these are computer-related acronyms.

Many people must have heard the name “ADIDAS”. But how many would know that this term might represent “All Day I Dream About Sports”. Likewise, the word ‘SCUBA” originates from “Self-Contained Underwater Breathing Apparatus”.

Some of you may be wondering what “ERASMUS”, located on Jalan H.R. Rasuna Said in Kuningan, Jakarta, stands for. It’s the “European Community Action Scheme for the Mobility of University Students”.

What should be your objective? To be “SMART”, right? “SMART” signifies “Specific, Measurable, Achievable, Realistic & with a Timeframe”!

A good friend of mine once explained to me that “BIBLE” means “Behold I Being Life Eternal”.

“Together Everyone Achieves More”. That’s what a TEAM is all about – indeed a beautiful definition for a team.

How did the word “TIP” originate? It is “To Insure Promptness”.

Most of us in modern organizations must sweat it out to know the “SWOTS” – “Strengths, Weaknesses, Opportunities, Threats & Strategies”.

Without going to a university, one can easily obtain a B.A. degree: just visit the U.S. and add a suffix “B.A.” to your name (“Been in America”). I have an uncle by name Budalur Ayyaswamy Ramanathan and he would always like to be referred to as “Ramanathan, B.A.”! Conveniently, he didn’t have to venture beyond the Matriculation examination.

A zealot Hindu explained that the word “GOD” is composed of three letters – G for Generator (Brahma), O for Operator (Vishnu) and D for Destroyer (Shiva) – the Trinity embodied in Hinduism.

When the GATT negotiations were taking place under the aegis of the World Trade Organization (WTO), a delegate from a developing country expressed his genuine fears and wondered “Are we GATTing into hot water”? The long-winded discussions caused another delegate remark that the whole exercise was only a “General Agreement to Talk & Talk”!

Incidentally, the generally understood meaning of the term “NATO” in Indonesia is different – “No Action, Talks Only”!

Next to the United Nations, Indonesia must rank high in giving birth to a multitude of acronyms. Way back in 1991, The Jakarta Post, in one of its editorials, described Indonesia as a country of one thousand and one acronyms.

Haven’t we heard somewhere about some government employees practicing 5D? No, it’s not like any 3D movie. It is just a shortened version of Datang, Duduk, Dengar, Diam and Duit! 5D may or may not be an acronym but it shows how well one can perfect the style.

We are quite familiar with krismon for monetary crisis and kristal for total crisis. Do you know what is Clinmon? It referred to the crisis in U.S., arising out of the “Clinton-Monica” affair.

Towards the end of the Year 2000, bankers all over the world were going through nightmares on account of Y2K – the millennium bug. What is Y126 then? It’s nothing to do with any year. It is 126 Yen to a U.S. dollar. Unless you followed the context, it would be next to impossible to decipher what such acronyms meant.

The World Health Organization, a wing of the UN, is intended to promote the health of the world’s citizens. But, with an acronym like WHO, unfortunately it lacked identity itself!

A Government cell in India is named “C-DOT” (Center for Development of Telecommunications). In the ever-expanding bureaucracy, one might suggest yet another acronym “C-DASH” – what could be created to fit this nice-sounding acronym may be left to the vivid imagination of the government officials!

A few acronyms are indeed humorous. Forum Indonesia Nederland’s is FINED. COW and CAMEL are not necessarily animals. They could be Contract of Work, and Capital, Assets, Management, Earnings and Liquidity respectively.

Medical science has contributed to the arts too. The acronym for Assisted Reproduction Technology is ART.

When the Indian cricket teams frequently lost their tests, the selectors – BCCI (Board of Cricket Control India) was re-christened by an enterprising columnist as Bored of Choosing Cricketers for India.

I guess the first acronym must have been coined by a VIP (Very Important Person), of course, immediately followed by SOS (Save Our Souls).

Light Amplification by Simulated Emission of Radiation – say this to a layperson and he will surely blink. Tell him it’s nothing but LASER and he’ll instantly beam.

We know DONUTS. For Bridgestone, Indonesia, it is an acronym for its Driver Oriented New Ultimate Tire Science.

Do you know what is an IDEA? It is Imagination, Data, Evaluation and Action. Isn’t it a unique idea? The meaning is similar to PDCA cycle (Plan, Do, Check, Action), often taught in workers’ training courses in Indonesia.

Nothing is worse for morale than a lack of information down in the ranks. The author of the book The Art of Japanese Management defined this problem in organizations as “NETMA”: Nobody Ever Tells Me Anything”.

When Rajiv Gandhi was Prime Minister of India, he was considered so indispensable to the nation that the media described that he truly enjoyed a “TINA” factor, meaning “There Is No Alternative”.

A female executive at a company sent an important and lengthy report to her boss, a middle-aged gentleman. This man, certainly not so gentle and acting too smart, returned the report to the lady with a small note saying, “You’ll have to KISS”.

The woman justifiably got very angry and went straight to the managing director’s (MD) office, strongly complaining to the MD. She demanded that if no action was taken against her boss, she’d have no alternative but to quit. The MD promptly called the male officer into his office and asked for an explanation.

Meanwhile, the news spread like wildfire within the office and people started commenting that “men become naughty after 40”! However, after a little while, both the male boss and the lady emerged from the MD’s office, the former smiling and the latter looking visibly shy. What was the secret of their rapprochement? All the boss meant in his note was “You’ll have to Keep It Short & Sweet” (KISS)!

An acronym may also be derived from its “parent” acronym, such as “ARF” (ASEAN Regional Forum), ‘ABAC” (APEC Business Advisory Council), “AFTA” (ASEAN Free Trade Agreement), and the like.

“O.K.” is an abbreviation for “all right”. For some people, this can even take the form of a verb, as in “I OK’d your proposal”.

George Orwell once compared using jargon to the process of picking up ready-made and worn-out strips of words and gluing them together as an easy way to avoid the thoughts required for original writing. Similarly, I think the present-day acronyms often reflect a desire to avoid the responsibility of engaging in direct, clear and effective communication. Simple, direct and forceful words are abbreviated into unintelligible acronyms, which pose a great threat to understanding and knowledge.

Just as a tailpiece, is the word “acronym” itself an acronym? While writing on the subject of Acronyms, I raised this question in the “Your Letters” column of The Jakarta Post a few years ago. An ingenious correspondent replied that it stood for “Association for Citizens’ Rights for Oppressed New York Minorities”!

Another writer, Haluk Yuksel of Jakarta, commented that I missed one of the best acronyms ever created by the San Francisco Transport Authority: Fresno Area Rapid Transport, affectionately known as FART!