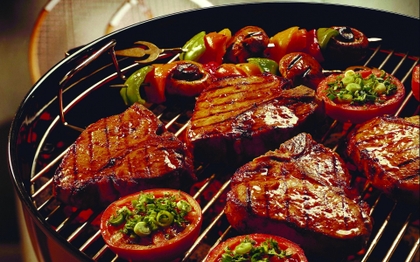 Grill some meat, Some fruit, and enjoy!

Barbecues – cooking over fire fuelled by charcoal – are quite an ancient method of cooking. In fact, it was the earliest from of cooking, from the time early man discovered the taste of scorched meat. The Americans made barbecues popular; hence the culinary ritual is associated with the wild west.

Despite the excited anticipation whenever barbecues are discussed, most cooks prepare their fare with little flair. What’s offered for grilling is often rather predictable. Aren’t there always chicken wings and sausages?

It is sad that the barbecue usually involves a narrow selection of meats, few vegetables and hardly any fruit. Yet almost anything can be charcoal-grilled except perhaps veal, delicate fish and leafy vegetable. If you think that some food may not take well to the fire, wrap them in aluminium foil and cast them the fire.

There are as many pieces of barbecue equipment as there are esculent meats. The most elementary comprise a hearth, in which you place the charcoal, and a grid, on which you lay the meats. Fancier versions include the rather large garden cooker that comes with an electric spit (in place of the hearth), removable hood and even a drip pan. But if you want yours really simple, just use any metal bin for a hearth and wire mesh for the gird.

But the trick to a successful barbecue is not to grill your meats in a roaring fire. Cooking should really only begin when the charcoal becomes a bed of glowing embers.

Although barbecues are basically casual affair (staged by the beach, in the garden, on the patio), they need not be plain. You can lay out plates, bowls and other eating implements as attractively as you like. Try using a basket of fruit, which you can eat later, as centerpiece.

To make eating easier and the cooking faster, serve your meat in small pieces. A whole chicken thigh not only looks unattractive but is messy to eat. More elegant and infinitely simpler to cook are cubes of meat. And for attractiveness.

Seafood taste superb when barbecued and the best thing is that they don’t need any marinate. Fish, prawns and even crabs are naturally sweet when roasted. You don’t even need to eat them with barbecues sauce. For prawns, skewer them right through the tail so as to stretch the body for faster cooking. A nice touch would be to sprinkle the prawns with a little curry powder before barbecuing them.

For a refreshing touch, and to balance the meal, a salad is ideal. Also, if you arrange your vegetables attractively, the salad bowl becomes the centerpiece of your table dÃ©cor.

Use several types of lettuce; top the leaves with tomatoes, mushroom, celery and avocado. Do not bother with heavy cream dressings. A little Balsamic vinegar and some good olive oil are all you need for a tasty dressing.

Instead of sausages, which contain so much sodium and preservatives, make meat patties instead. Used very lean ground pork or beef. Add chopped onions and a pinch of oregano and marinate with a dash of soy sauce and lots of pepper.

Shape the minced meat into burgers. Pat them flat before placing the meat onto the grid. Serve your burgers with tomato sauce and spicy whole-grain mustard.

For dessert, don’t bother with cakes. By the end of the meal, when the embers are fading, nobody can have heavy desserts anyway. Try making fruit kebabs. They’re unusual.

Firm fruit are better for grilling than soft, pulpy ones. Try bananas, strawberries and rock melons. Cut the fruit into bite-size pieces, skewer them and brush lightly with honey. Barbecue the fruit kebabs near the embers till they’re slightly burned. If you like your dessert a little more elaborate, spoon vanilla ice cream over your fruit kebabs.

OUT ON A STICK

Some meats taste batter when theyâ€™re marinated and chicken is definitely one. Peel away the skin, cut the chicken (thigh rather than breast) and marinate it with soy sauce and lost of pepper. For a gourmet touch, and a dash of Japanese mirin (sweet sake for cooking).

Pierce your chicken cubes with a stay stick together with other vegetables like tomatoes, spring onions and mushrooms. Brush the kebabs with a little oil before putting them to the grill.

If you want to make kebabs with shellfish and are afraid they may break when grilled, try wrapping the meat with rashers of lean bacon. This will keep the meat intact.