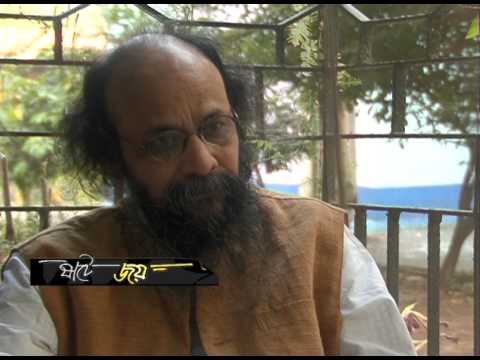 Professionally an Auditor, I have no authority to pretend as a literary connoisseur. However, penchant for poetry is everybody’s right which I have along with my passion to transmit the best of Bengali literature across its linguistic boundary, of course by my translations, good or bad. This passion was kicked up by a few of my North Indian friends in their urge to know Tagore a bit more than they did already before they discovered me while I was on my professional tour in Delhi. However, under their pressure, I started translating Tagore for their consumption in 1998 which they published in a few North Indian magazines until publication of my book of Tagore translation THE ECLIPSED SUN. During this time I took excursion into translation of a few modern Bengali poets also of whom Joy Goswami was one whose following two poems only I had translated but not published anywhere until now. With this very limited exposure to Joy, I shall not try to lecture on the merits etc. of his literature except that I liked intensely his two poems I had translated (in March 2000But, I shall highlight the interesting information I had read in The Statesman (Calcutta) in late 2007 that two Americans have brought out their book of translation of Joy Goswami’s poems published from Calcutta. A picture of Joy with a copy of the book in his hand went with the news and Joy appeared to be rather satisfied with this publication. But the news also informed that the two American translators were unhappy about some changes made in their script by the publishers without their prior permission. The news did not give the name of the publishers though of course the names of the two American translators were given. However, due to my carelessness, as is my wont, I forgot to note down their names and so regret my inability to mention the names here. But what is amazing in this news of commonplace strife in the publication world is, Joy has infiltrated even the American minds who are temperamentally and culturally poles apart from the Bengalees. So, this news on Joy should be joyous to the Bengalees!

[Translator’s note: As per report of the World Bank, the benefits of ‘Globalization’ has reached only 20% of the populace in India. More frightening is, the economic gap of this 20% with the rest 80% is widening with time. In other words, while the economic affluence of the minority rich is mounting, the rest are drowning into the bottomless abyss of despair.

What is missing in such surveys is, how the dream for a happy home of the countless youths is shattered under this socioeconomic pattern for which we have to fall back on the poets. One may recall Tagore’s poem “Bansi” (=’Flute’) where the young man oppressed by poverty absconded his nuptial ceremony, thus to save the bride from the misfortune of being his life mate. “That very hour I did abscond; / Thus the lass eluded my bond; / And I backed to square one / Her passage to my abode to shun / To my dismay; / Though she visits my mind every day / Clad in Dhakai Sari / Forehead with vermilion smeary.” Only this nostalgia could be the sustenance of the young man for the rest of his life.

Further, Tagore’s “Sadharan Meye” (=A Commonplace Girl) may be recalled where the fiancÃ©e of a middle class girl went over to England (for higher study) only to be beguiled by the glamour of the foreign beauties there and became amnesiac of his fiancÃ©e at home. The commonplace girl implores to Saratchandra ( the renowned novelist at that time, still a bright star in Bengali literature with his great fame for his empathetic novels particularly on tragedy of women) to write a story whose central character would be a girl (to be named Malati, the imploring girl’s namesake) forgotten and neglected by her fiancÃ©e (to be named Naresh, again namesake of the treacherous lover), similarly beguiled by the women abroad. But, the girl warns Saratchandra, if he stops there, it would blemish his image of a great novelist. So, as ‘Saratchandra is not a miser like God’, he should stretch is story further where Malati would score brilliant result in the Calcutta University, and on invitation from abroad, would attend scholarly conferences there and Naresh (having repeatedly failed his exams. there), along with his foreign girl friends, would in amazement be witnessing from far in the hall Malati being awarded accolades.

But, Joy Goswami’s heroine has no room for such fancy even amidst her grinding poverty. Her younger sister has opted for the underworld. So, questions the heroine her modern Dushmanta (the king in the classic Sanskrit story who had forgotten his fiancÃ©e Sakuntala) â€“ “How come if I too / Be a base girl with taboo?”

Benimadhab, O Benimadhab,
To your abode I’ll lob;
O Benimadhab, do you still me recall
And that aches you at all?
O Benimadhab, under the Tamal tree
You played flute in musical spree â€“
While I in Malati school all in gloom
Doing sums at my desk in the classroom;
Outside stands the teacher with her hubby aside
With my lessons I slog inside;

Then just in class nine,
For ‘sari’ I do pine
Met you at Sulekha’s, O Benimadhab
Upon my first heart throb.

Benimadhab, you a student bright,
From the town arrived, our village to sight â€“
I’m a girl mere
Complexion no way fair
Escaped to the next room
As you arrived all in your bloom.

Benimadhab, in a shop serves my father
Yet, in the woods, around flowers the humming bees gather.
In the evening I do err
In my sums, on freakish spur
Of my passion- for home task not so keen
While in class nine, in my sweet sixteen;
And there by the bridge on the street
Once we sneaked our meet.

Benimadhab, O Benimadhab,
Tell me the truth, do not fob,
Do you still muse
Those days of no use?
Divulged those to your love?
Glimpsed I just once your better half
Under the dazzling light â€“
For satiety of my sight,
Yet my eyes to blight;
But to truthfully opine,
You two matched fine.
Back home, as passed the spell
I wished both of you well.

Now at night I retire
In the bed spread on the floor there
At the room on the ground floor
Moonlight beams through the window to the door.
The sister next to me
With whomsoever now she be,
Is a pervert- lost wayward
At the crooked bent to the underworld.
Now I’m the sewing teacher local,
Can’t flare up and be vocal;
With my hand to mouth life
Daily is my strife â€“
How come if I too
Be a base girl with taboo?

[Translator’s note: Children are compared with the angels. But, with age, their wings shorten and they come down to the mundane world from their dreamland. However, in spite of the illusion world of their childhood dissolving with age, the poets do not lose their aesthetic senses. Even in the midst of this rude practical world they retain their perceptions of truth and beauty and can still draw on their infantile nostalgia.
At grown up age, the realization that strengthens in the poets is that the idea they had nourished in their childhood that their fancy world was the entirety and that to capture that alone in their poesy would divulge the complete spirit of mankind, was a great mistake. Gradually they realize, the world is too diverse and a large part of it remains un-captured in their whole life’s aesthetic creation and many of their earlier perceptions also get lost with the flow of time. Maybe, from this very realization Tagore had said, “This musical dedication didn’t respond to many a call / Gaps remained” (Ei Swar Sadhanay Pounchilo Na Bahutaro Dak / Roye Gache Fank”.]

When a child, I’d marvel,
If for play I could travel
To the land of clouds and, true it came â€“
A cloud girl asked, “Boy, what’s your name?’
Answered I, “Magic Spell”;
Annoyed, she rebuffed, “Hell;
Such an absurd name can’t be.”
Said I, “No, not so, listen to my story.”
Said she, “I won’t â€“ the same king and queen â€“
For all these trash I’m not keen â€“
Neither the prince and flying horse
Swords and shields will me engross.”
Said I, “For you I’ll rewrite, it’ll be mine.”
Said she, “Will you? That’ll be fine;
But it must be long and give me when done.”
Assured I, “I’ll write the whole earth for your fun.”

But years rolled by
Ere my pen on my paper I’d try.
As I wrote a page or two
A craze drove me for the quest of clue.
To the land of clouds I reverted
That me in infancy heartily greeted;
But not a known face there
I did encounter.
But one for me did tarry,
I asked her, “Are you cloud girl, that very?”
Says she, “Those I remember not.”
Said I, “A book you wanted me jot.”
Asks she, “Is it with you?”
“But I want it anew â€“
So float it in that lake
It now being all fake;
And yes, I’m cloud no more,
They call me rain, not to soar.”
That instant it did hail
Soaking me hair to nail.
It got lost with other rains around,
Joining the river streams far bound.

“They call me rain, they call me rain”
Rang in my ear time and again â€“
Wet and drenched under the tree
Mused, could clouds a mere store of rain be?
And not my ecstasy
That floats high free?
But some other rain reckoned me â€“
“Why be sad?” â€“ asked she
“Go back and rewrite “
Might be to your less delight â€“
Now full monsoon,
It is Earth’s boon
We’re busy going lands far
To fertile the soil under â€“
So, mind your work, don’t slack
As clouds, again to you we’ll be back.”

I’ll write a whole Earth, a whole Earth â€“
So left home to find where I dearth;
Built a cot in the dense woods
Paper and pen as my only goods-
Alone to be left there,
For food, boil a bit of rice bare â€“
And I’d write without stint
On trifles as I might mint.
The Earth is of various dreams
The fairy tale that so deems,
Is mine â€“
Nothing else I pine.
Hell bent to write and erase
Day and night all varied phrase,
As my hands paralyze
I stop only to realize
I missed all year, month and date
And that too very late.
To my scribbling I take a closer look
To find I hadn’t finished even a slender book.

There is sudden shower
On my scribbler,
To wash away in the wood
All my life’s writing as I could.
Outside I find under the tree
The joyous peacock in dancing spree;
From one tree to other the birds lob,
Say they, “For the poets here we mob
For them we stand bold
Amidst storm and cold
For truth and beauty
To be sung through eternity.”

The poet from his cot
At the horizon lost his vision to spot
In his ecstatic mood
Beyond the field, river and wood
Where stands the mountain
To pour out silvery fountain â€“
Where rains for ever
Humans stepped never
Rushes the golden cloud deer
His juvenile days to peer.