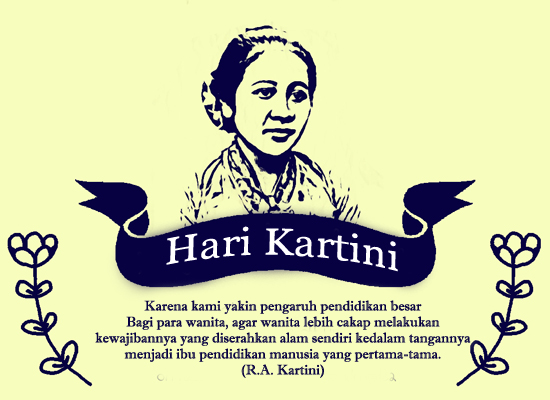 There are more stories behind the commemoration of Kartini Day. It’s not just merely celebration. Deep beneath the festivity, Kartini Day has been commemorated to remind us that women and men are supposed to be equal.

Raden Adjeng Kartini (RA Kartini) was born into a noble family on April 21, 1879 in the village of Mayong, Java, Indonesia. Living in 19th century, she was the daughter of Assistant of Head of Regency who was also the descendant of a noble family. During that period, women’s access to higher education was restricted.

RA Kartini even experienced the Javanese tradition of “pingitan” , a period when a teenage girl is secluded at home and her activities are limited, until a man marries her. Kartini spent her time by reading books she got from her relatives. She also sent letters to her Dutch friends, protesting about gender inequality of Javanese traditions such as forced marriages at a young age and pingitan, which also denied women the freedom to pursue an education.

She was married to Raden Adipati Joyodiningrat, the regent of Rembang, at the age of 24. Kartini had recently been offered a scholarship to study abroad, but the marriage made her erase her hopes of accepting it. Even then, at 24 she was too old in Javanese tradition to expect to marry well.

Fortunately, when she was intent on spreading her feminist spirit, her husband supported her to establish a school for Javanese girls. With help from the Dutch government, in 1903 she opened her first Indonesian primary school for native girls that did not discriminate based on their social status. The school taught girls a progressive, Western-based curriculum. To Kartini, the ideal education for a young woman encouraged empowerment and enlightenment. She also promoted their lifelong pursuit of education.

In Indonesia, some people still think that education is only for men. Many families give this privilege only for their sons, and not for the daughters. They still have this mindset that daughters will end up as a housewife, or by the Indonesian popular saying, they only end up in dapur, sumur, kasur (kitchen, well, bed). They don’t care if these girls are not educated, as long as they are capable of being a wife and mother at the end of the day.

As time went on, this mindset slowly loses its place in people’s mind. More and more modern parents give freedom to their daughters to get higher education, to be career women, and pursue their dream. More and more husbands give the freedom to their wives to explore their potential, not only in the office but also in the field of entrepreneurship. Are these women not good enough to be wife and mother? NO. They still know their responsibilities, they still have time to help their children to do their homework, and they still have time to do domestic chores. We can conclude that freedom and equality for women do not necessarily make them forget about their responsibilities.

The commemoration of Kartini Day is a good chance for us, women and men, to remind ourselves gender equality. The festivity of Kartini Day—the fashion shows, cooking competitions and all the festivities—are a great reminder for us to keep the women’s spirit alive. We need to always remember that women are great; women are strong; women are capable.
Happy Kartini Day!