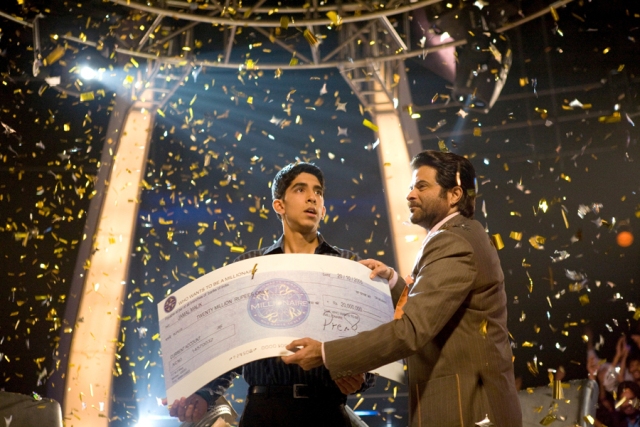 This is one I just could not resist and has finally turned out to be my favorite. Inspiration came pouring into my head in the middle of the night!, says Sakhi Keswani.

Slumdog Millionaire
Realistic, Touching, Heart wrenching, Romantic, Exciting, Filthy and many more adjectives that just could not describe the movie well enough. Winner of 8 Oscars, winner of 4 Golden Globes and Nominated for tons more, this movie just does not stop attracting the media. It has done all Indians proud and many more offended. Danny Boyle sure has created a Movie that will be remembered.

The Gist:
Just as the tag line says
Jamal Malik is one question away from winning 20 Million Rupees, How did he do it:
A. He Cheated
B. He’s lucky
C. He’s a genius
D. It is destiny

Jamal Malik (Dev Patel), an 18 year old orphan from the Impoverished slums of Mumbai, referred to the chaiwala (person who serves tea) by a very intimidating and egocentric show host (Anil Kapoor), Is on one of the most famous shows in India Who wants to be a Millionaire.
Reason for being on the show: to be able to find the love of his life, Latika (Freida Pinto), who moves from being a child prostitute and presently the muse of a gangster and to meet his Brother Salim (Madhur Mittal), a thief and Killer.

How did he get on the show: Luck, as they all say or like one of the choices above It is Destiny?
Luck came into play bringing Jamal onto the show and raised doubts when he reached the 20 million stage, taking him straight to Police custody for questioning. How could a Slumdog ever reach that stage in the game? A recorded video taking it question by question, takes us back to Jamal’s childhood and tragic experiences. From his mother’s death at the hands of anti-Muslim raiders to the pursuit of an autograph from a famed Bollywood film star to the blossoming friendship with Latika. We are taken on a very realistic journey filled with tragic and startling experiences ultimately leading to the answers of the questions on the show. At the end of it all Destiny came into play with the last question, reuniting Jamal with his third Musketeer.
Mumbai, among all this, was, for the first time ever, portrayed in its fullest. Unlike the vibrant and colorful views we get from the regular Bollywood movies, this one took us deep into the filthiest slum areas then towards the most grand and upscale parts of Mumbai. It shows us the diversity, culture and a complete mix of lifestyles that truly exists in the city.

A movie that will never elicit any kind of criticism from me, A movie so close to my heart because I have dealt so closely with Slum dwellers. It needs to be specially awarded because it has given a new life to these two children
Azharuddin Ismail, 10, and Rubina Ali, eight, currently live in appalling conditions in one of Mumbai’s most squalid slums. Azharuddin lives with his mother, who is blind in one eye, and his father, a TB-sufferer who earns around Â£1 a day selling scrap wood, by the side of a bustling road under tarpaulin sheets because they cannot afford a house. Rubina lives in a one-room tin shack next to train tracks, with an open sewer running past her door
Slumdog Millionaire is one movie that reminds us that we, humans, are just characters in a book; we never know what scene we may be playing next!