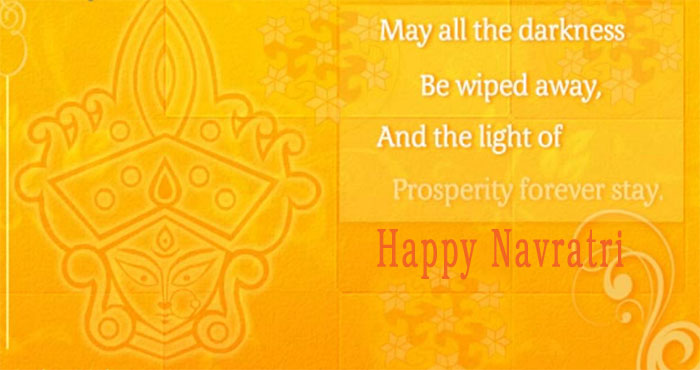 The tenth day is celebrated as Dasara or Vijaya Dashami.

Meaning of Navratri
Navratri, literally interpreted as ‘nine nights’ is the most celebrated Hindu festival devoted to Goddess Durga symbolizing purity and power or ‘shakti’. Navratri festival combines ritualistic puja and fasting and is accompanied by resplendent celebrations for nine consecutive days and nights.

Apart from the Navratri in September – October, there are three other Navratris in a year. The Chaitra Navratri or the Navaratri in March-April, also known as Vasant Navratri or Ram Navaratri.

All nine days during Navaratri are dedicated to nine forms of Goddess Shakti. Shardiya Navaratri falls in the month of September or October. The nine days festivity culminates on tenth day with Dussehra or Vijayadashami.

During Navratri, people from villages and cities gather to perform ‘puja’ on small shrines representing different aspects of Goddess Durga, including Goddess Lakshmi and Goddess Saraswati. Chanting of mantras and renditions of bhajans and folk songs usually accompany the puja rituals for nine consecutive days of Navratri.

Why Nine Nights & Days?
Navaratri is divided into sets of three days to adore different aspects of the supreme goddess. – Durga, Lakshmi and Saraswati.

On the first three days, the Mother is invoked as powerful force called Durga in order to destroy all our impurities, vices and defects.

The next three days, the Mother is adored as a giver of wealth and prosperity, Lakshmi, who is considered to have the power of bestowing on her devotees the inexhaustible wealth.

The final set of three days is spent in worshiping the mother as the goddess of wisdom and spiritual knowledge, Saraswati. In order have all-round success in life, we need the blessings of all three aspects of the divine mother; hence, the worship for nine nights.

Goddess Durga is also worshipped under nine different names for the nine days in Navratri. Every day, she assumes a new character, a new look and a new duty.
First three days:

The goddess is separated as a spiritual force called Durga also known as Kali in order to destroy all our impurities.
1. The first form of Goddess Durga is called ‘Shailaputri’. She is considered the daughter of the Himalayas. She is a form of Shakti, the consort of Lord Shiva.
2. The second form of Goddess Durga is known as ‘Brahmacharini’. Her name is derivative of the word ‘Brahma’, which means ‘Tapa’ or penace. She is also a form of Uma or Parvati, a form of Mata Shakti.
3. On the third day the Goddess is worshipped as ‘Chandraghanta’. She is the symbolic representation of beauty and bravery.

The Mother is adored as a giver of spiritual wealth, Lakshmi, who is considered to have the power of bestowing on her devotees inexhaustible wealth, as she is the goddess of wealth
4. On the fourth day Goddess Durga is worshipped in the form ‘Kushmanda’. It is believed that Kushmanda is the creator of the entire Universe and she has created the entire Universe by her laugh.
5. On the fifth day, the form of Goddess Durga is called ‘Skandamaata’. She is actually called so because she is here represented as the mother of Skanda, the chief warrior of the Gods army.
6.  On the sixth day, the Goddess Durga is worshipped as ‘Kaatyayani’. Seated on her vehicle lion, Kaatyayani has three eyes and four hands.