The buffalo demon, Mahishashur, performed penance to Lord Bramha and for his efforts he received a boon that no man or god would be able to kill him. Full of power, he attacked the gods and captured heaven.

Goddess Durga represents a united front of all Divine forces against the negative forces of evil and wickedness. The gods in heaven decided to create an all-powerful being to kill the demon king Mahishasur.

All gods and Devas including the 3 goddesses Parvati, Laxmi and Saraswati congregated at Vaikunta, Lord Vishnu’s home to find a solution. Then the entire Vaikunta resounded with a voice, a strong and melodious voice, the voice of Mahadevi, the great Goddess. ‘Sons, Lord Brahma’s boon protects Mahishasura from any man and God but not from a woman. Use all your powers and together create a great power. The three Goddesses should come together. I will incarnate there in the form of a warrior Goddess. Gift the warrior with all your weapons. She will solve all your problems.’

The three Shaktis – Parvati, Lakshmi and Saraswati, who were incarnations of the great Goddess, merged together.

When they came together Shiva, Vishnu and Brahma who were angry with Mahishasura gave out a blinding white light, which fused with the merged bodies of the three Goddess.

The bright light met at the ashram of a priest Katyayan. From this light emerged a woman with a thousand hands. The Goddess was Mahadevi Durga [Durga literally translated in Sanskrit means ‘the invincible’ and is also referred to as ‘Katyayani’ as she was formed in the ashram of Katyayan. The Goddess looked ferocious and beautiful at the same time.

Lord Shiva offered his trident, Lord Vishnu offered his Sudarshana Chakra and Lord Brahma offered his Kamandalam of holy water to Durga. Each of the gods gave her a weapon. Himalaya gave her a lion. Riding the lion she began to roar.

Mahishashur came out of his palace on hearing the roar. Durga killed his army of demons. Mahisha took many forms, but she defeated all of them. Finally, he took the form of a buffalo and attacked her. Durga killed Mahishashur with her trishula or trident. The battle with Mahisasur and his army is thought to have been for 9 days celebrated as the Navratras and tenth day of victory is celebrated as Vijay Dashmi or Dusshera. Goddess Durga is worshipped as the invincible and destroyer of all evil. 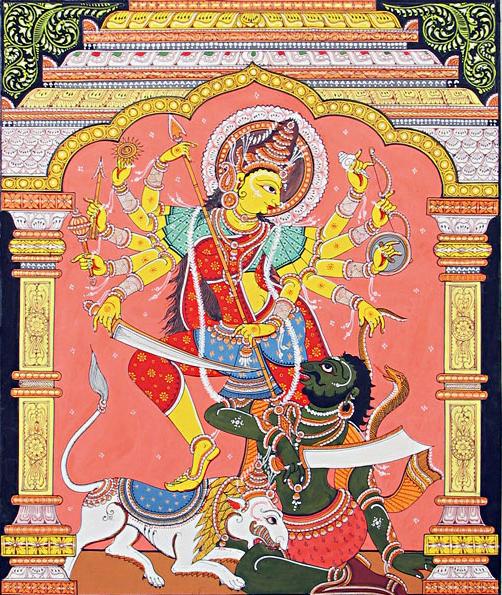 The image of Durga, the Eternal Mother destroying the demon, Mahishasur is symbolic of the final confrontation of the spiritual urge of man with his baser passions.