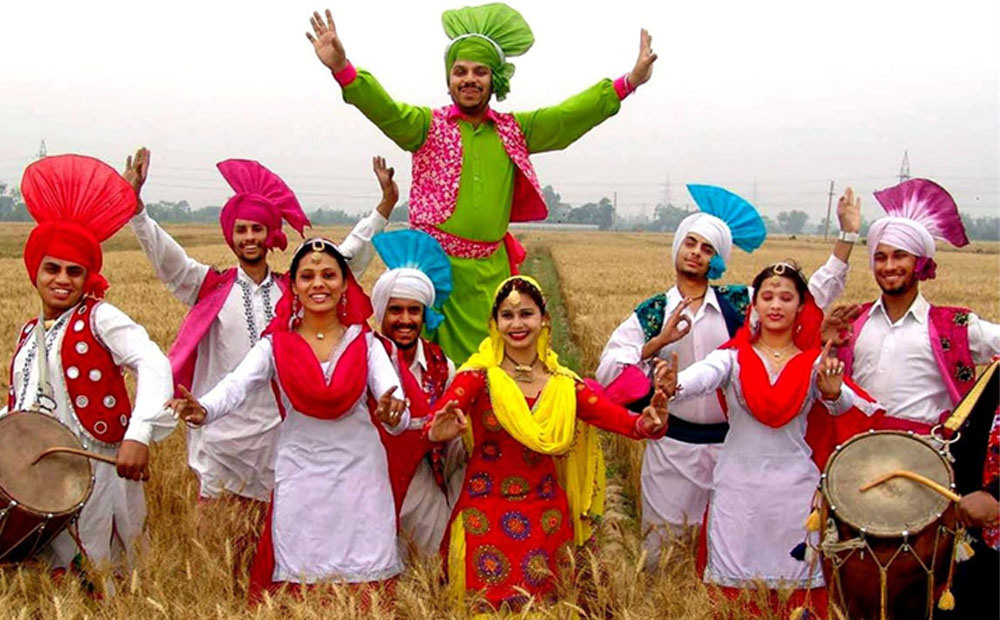 Mid April is the time for festivities across India to celebrate the New Year. Different names, rituals, and festivities. A time for colorful gaiety, scrumptious food and more… 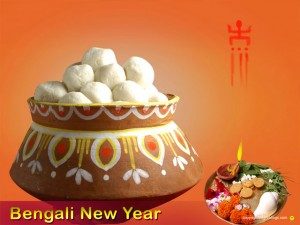 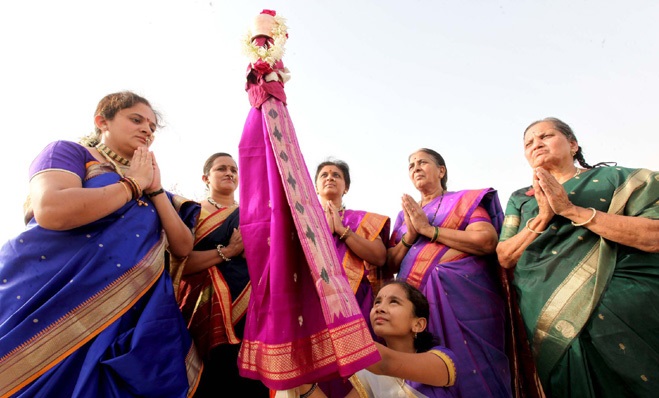 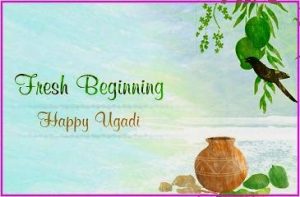 Ugadi is celebrated as New Year’s Day in Karnataka and Andhra pradesh. The name Ugadi is derived from the name “Yuga Adi”, which means ‘the beginning of a new age’. It is celebrated on the first day of the Hindu month Chaitra, which marks the onset of spring. It is believed that Lord Brahma, the creator according to Hindu tradition, began creation on this day. Preparations begin well ahead of the festival. Houses are given a thorough cleaning, people don new clothes and special dishes are prepared, with six flavors. 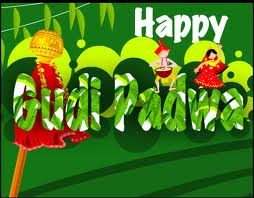 Gudi Padwa is celebrated as New Year’s Day in Maharashtra. It is celebrated on the same day as Ugadi i.e., the first day of the month Chaitra. Courtyards of rural houses are cleaned and plastered with fresh cowdung. Designs called Rangolis are drawn on doorsteps. People wear new clothes and special dishes are prepared. Lord Brahma is worshipped on this day and the gudi, Brahma’s flag (also called Brahmadhvaj), is hoisted in every house as a symbolic representation of Rama’s victory over Ravana. 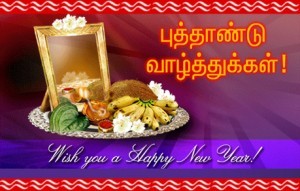 Puthandu, also known as Varuda pirappu , is celebrated as New Year’s Day in Tamil Nadu. It is celebrated on the first day of the Tamil month Chithirai, which falls on 14 April. Women draw patterns called kolams. A lamp called a kuttuvilaku is placed on the center of the kolam, to eradicate darkness. A ritual called kanni takes place. Kanni means ‘auspicious sight’. People watch jewellery, fruits, vegetables, flowers, nuts, rice etc., as it is a belief among Tamil people that it brings prosperity. People wear new clothes and special dishes are prepared for the occasion. A car festival is held at Tiruvadamarudur, near Kumbakonam. 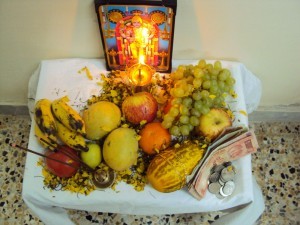 Vishu is celebrated as New Year’s Day in Kerala. It is celebrated on the first day of the Malayalam month of Medam. Offerings to the divine called Vishukanni are neatly arranged on the eve of the festival and consist of rice, linen, cucumber, betel leaves, holy texts, coins and yellow flowers called konna (Cassia fistula). A bell metal lamp called nilavilakku is placed alongside. It is considered auspicious to see the Vishukanni first thing in the morning. On this day, people read the Ramayana and go to temples, Hindu places of worship. Children burst crackers, people wear new clothes and prepare special dishes and the elders of the house give out money to the children, servants and tenants. The money given is called Vishukaineetam. 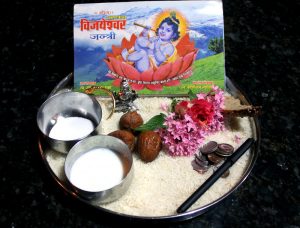 Navreh is the lunar new year which is celebrated in Kashmir. This coincides with the first day of the Chaitra (spring) Navratras. This day finds mention in Rajtarangini and Nilamat Purana of Kashmir and is regarded as sacred in Kashmir as the Shivratri. The celebrated Arab scholar Alberuni has written that Kashmiris celebrate the second of Navaratras to commemorate victory of their greatest and famous king – Lalitaditya – with great festivity and pomp. Navreh falls on the same day as Ugadi or Cheiraoba or Gudi Padwa. 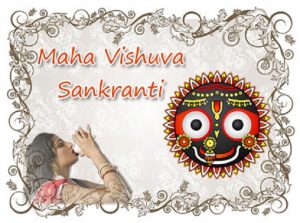 Mahavishuva Sankranti, is celebrated as the Odia New Year. On this day, religious people offer delicious Pana – a sweet drink made of different types of fruits, water, milk, bela, curd and sugar or jaggery – to the Tulsi Plant, Lord Shiva and Shalagram and their deities in various Temples of the state. People also drink Pana with great enjoyment. During the festival you will find water pots placed on the roadsides to help the thirsty souls. Water is as also offered to animals and birds with equal enthusiasm. This Sankraniti is also known as Pana Sankranit to Jala Sankranti.

This day is also a celebration of Hanuman Jayanti. Mahabishuda Sankranti is also significant for Jhamu Yatra and this month long festival comes to an end. Patuas (those who observe it) keep fast and wander to various places to preach the religious significance the festival of the Lord Shiva, Goddess Parvati and Goddess Mangala. On the concluding day, these Patuas discipline their senses for more penance and walk on fire and thorns to concentrate on spirituality for the dignity and propriety of life. 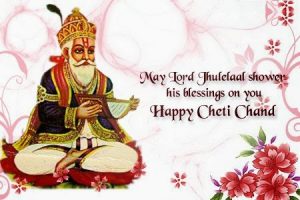 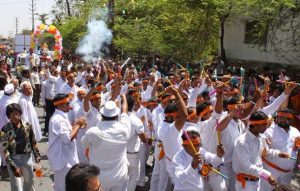 The festivals of Chaitti and Basoa are celebrated as New Year festivals in the state of Himachal Pradesh.

The festival of Basoa, also known as Bishu, is celebrated on the first day of the month of Baisakh. The aboriginal and the farming folk celebrate the Basoa festival. Three days before the festival, people make little cakes with Kodra (a coarse grain) flour and wrap them up in leaves. After three days the cakes ferment, then on the morning of the festival day people invite the married daughters and other relatives and break and eat these cakes with honey and sweet water flavoured with jaggery. A ritual song is sung on this occasion.’Manoj 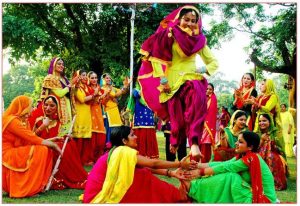 Baisakhi Festival, also called Vaisakhi, holds great importance for the Sikh community and farmers of Punjab and Haryana. Baisakhi falls on 13 or 14 April, the first day of the second month of the year according to the Nanakshahi Calendar. Sikhs also celebrate this day in honor of their
tenth guru, Guru Gobind Singh. Baisakhi commemorates the day when the Sikh Guru eliminated caste differences and founded Khalsa Panth in 1699, at Anandpur Sahib, Punjab. The Sikh New Year as per the Sikh Nanakshahi Calendar falls on 14th March every year, with the beginning of Chet; and is marked with revered celebrations throughout the Sikh community. 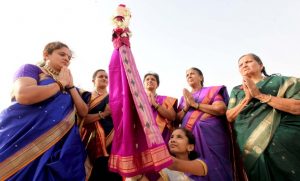 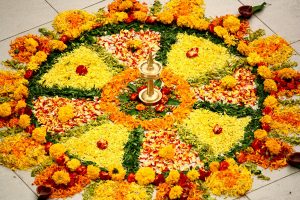 Juir Sheetal also known as Pahil Baisakh or Baisakhi or Maithili New Year is the celebration of the first day of the Maithili new year. This day usually falls on 14 April for the Maithils in Mithila region of India and Nepal. This is also called Nirayana Mesh Sankranti or Tirhuta new year in some regions of Mithila. The festive occasion is in keeping with the Hindu solar calendar. This day falls on the 13-14th or 14-15th of April and coincides with the new years of other eastern states of India. Sweets and greetings are exchanged. This day is also called Hanumat Dhwajadanam, the day Hanuman’s flag (and hence Mithila’s flag) is to be flown. It is also the birthday of Raja Salhesh (Shailesh – the king of Himalyas region of Mithila who won area up to Tibet) whose garden is at the Mahisautha in Siraha district headquarters of Nepal.