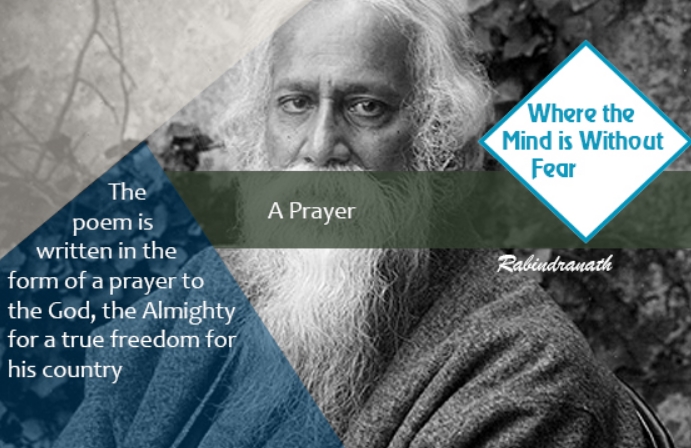 I have restructured the Poet Rabindranath Tagore’s own English translation of this poem which is in prose form.. The readers will judge how far my attempt of rhyming has been worthwhile here. However, the original poem was written at the dawn of the 20th century while talk of ‘globalization’ was a far cry. But the Poet preached it in those days, albeit, from a humanistic angle, as opposed to the ‘commercial’ noises we hear now-a-days in the name of ‘globalization’.

Where the mind is without fear,
Head held high for a vision clear
Of a world not fragmented
By parochial walls elated
Where from the deepest truth the words fount
Human toils for an excellence to mount;
Wisdom serene not weary
In aimless search through desert dreary
But thoughts are flowered by Thee
Into myriad creativity
For that heaven’s sake,
O Lord, let my country awake.

The original poem is as below:

Where the mind is without fear and the head is held high
Where knowledge is free
Where the world has not been broken up into fragments
By narrow domestic walls
Where words come out from the depth of truth
Where tireless striving stretches its arms towards perfection
Where the clear stream of reason has not lost its way
Into the dreary desert sand of dead habit
Where the mind is led forward by thee
Into ever-widening thought and action
Into that heaven of freedom, my Father, let my country awake