By Poonam Sagar: Here we were in the hotel lobby at 5 am waiting for our tuk tuks and looking forward to another amazing day in Siem Reap. A tuk tuk is a small carriage attached to a motorcycle an can carry four passengers. We found these to be cheap and convenient means of transport in Cambodia, with friendly and polite drivers. Soon we were off in the dark to visit the famed temple of Bayon. It was a fairly long drive in the dark through a forest and there was a nip in the air and I was glad I had brought my silk shawl, from the Silk Center in Puok, along.

And then abruptly, we were at the temple, a large stone structure which rose up like a mountain. In the early morning, we impatiently waited for sunrise. In the faint light of the creeping dawn we entered the temple and were guided to the second level. The rising sun slowly revealed the many faces with their amazing smile. The immense beatific smile under half closed eyelids were vaguely feminine on gigantic masculine faces, revealed one after another from one tower to another around me. Dwarfed by smiling faces in all four directions, it was the oddest feeling.

There were four faces on on each tower facing the four cardinal directions. Standing on the solid rock blocks under the morning sky, gazing at the innumerable giant smiling faces was magical. It gives me goose bumps just remembering and looking at my photographs. 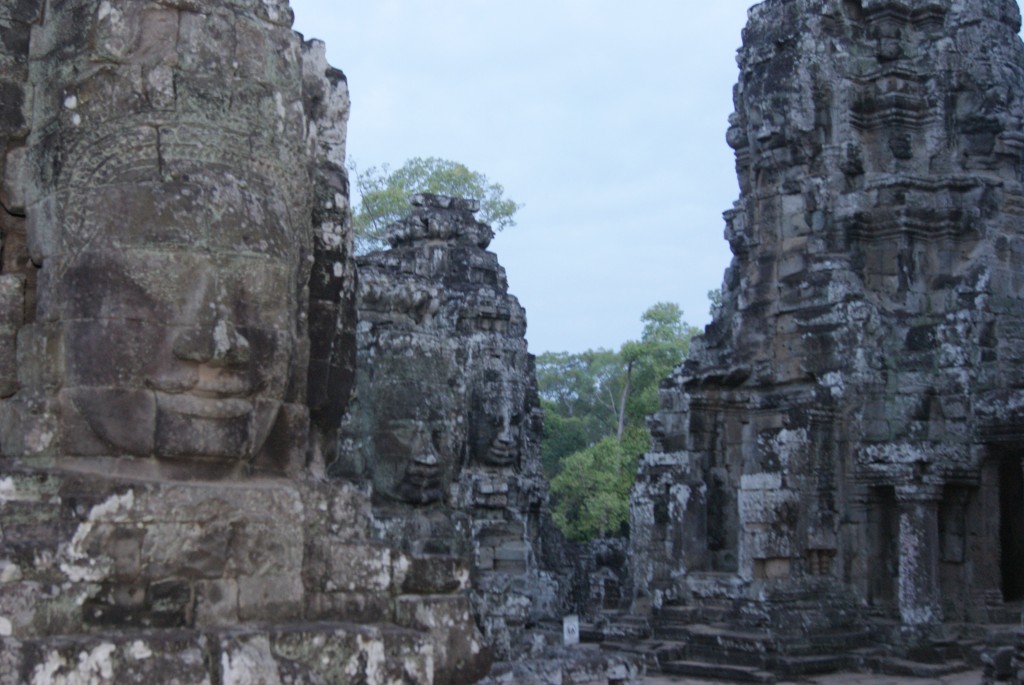 The temple is mountain of 216 gigantic face sculptures that adorned its original 54 towers. The faces represent Lokeshvara, Mahayana Buddhism’s compassionate Bodhisattva, and are thought to be copied from the actual face of Jayavarman VII, and whose smiles was so gentle that it is often referred to as the Khmer smile. Now only 37 towers remain. Bas reliefs on the exterior walls of the lower level and on the upper level depict an unusual combination of mythological, historical and mundane events.

Background: Bayon was the state temple of Jayavarman VII, built in the late 13th century. The temple is situated at the center of Angkor Thom, a walled capital city the Khmer Empire. Four of the cityâ€™s five gates are on the same axis with the temple, and the walls of the city form the enclosure walls. The temple was intended to evoke the form of Mt. Meru (as was Angkor Wat), the cosmic mountain at the center of the world in Buddhist cosmology. In keeping with this cosmic symbolism, the plan of the Bayon temple is based on a yantra, a symbol used by Tantric Buddhists to represent the layout of the universe.

Lokeshvara (trans. He who looks over the world) is the embodiment of awakened compassion in Mahayana Buddhism.

Pierre Loti, a French visitor to Bayon in 1901 in his book Angkor, with the remarkable perception of a poet: from on high, the four faces on each of these towers face the four cardinal points, looking out in every direction from beneath lowered eyelids. Each face has the same ironic expression of pity, the same smile. The multiplication of these faces to the four cardinal points symbolizes the idea that the Royal power is blessing the four quarters of the Kingdom. As for the repetition of these faces on every tower. The idols worshipped in the chapels inside the towers were statues of deified princes or dignitaries or else of local Gods. Each tower corresponded to a province of the Kingdom or at least to a religious or administrative centre of the province. Thus if the four faces symbolizes the Royal power spreading over the land in every direction, placing them over the chapel which was typical of each province signified that: the King Jayavarman VII’s Royal power was as strong in the province as at Angkor itself. This accounted for having a four-faced tower to represent each part of the Kingdom. We now begin to understand this mysterious architecture as the symbol of the Great Miracle of Jayavarman VII. It represents his administrative and religious power extending to every corner of Cambodian territory by mean of this unique sign. 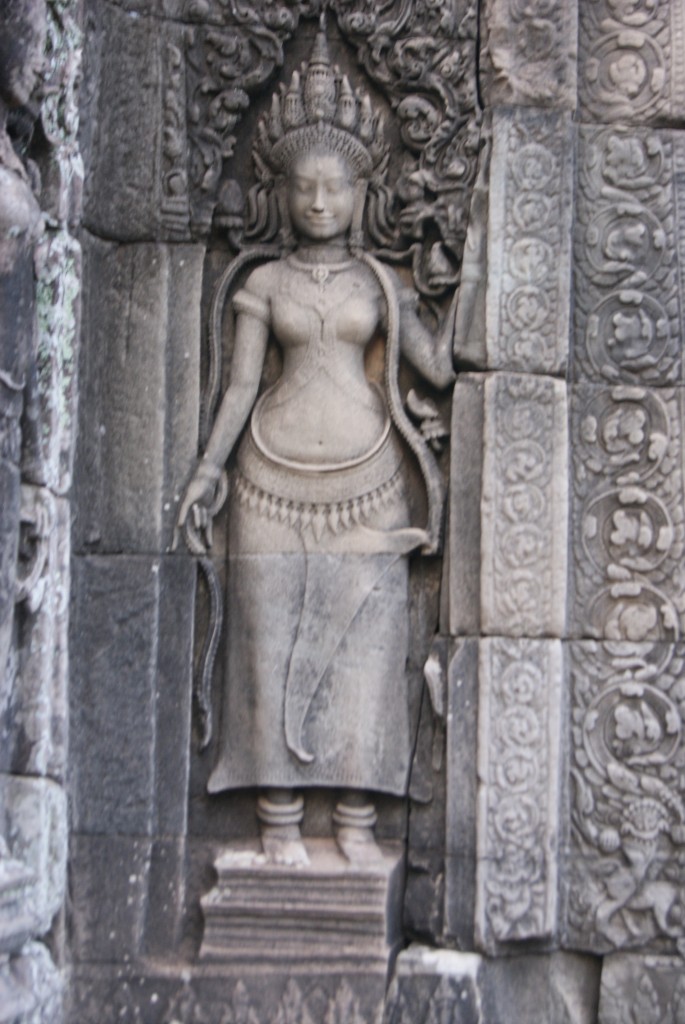