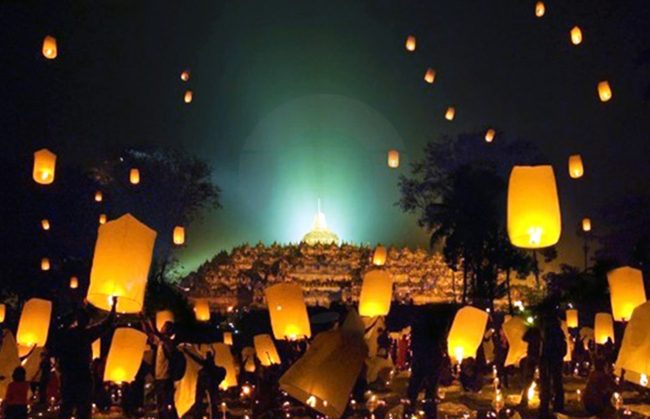 Even if Waisak is only celebrated by 1% of the population, it is a national holiday in which everyone in Indonesia joins in to celebrate the occasion.

Waisak is an extremely important celebration for Buddhists. It is the day of birth, enlightenment and death of the Buddha. On this day, the Buddha resisted all of the temptations of the world and was enlightened by the truth. He finally received the truth that will ease human suffering in the form of the Ten Great Virtues: Charity, Morality, Renunciation, Wisdom, Effort, Patience, Truth, Determination, Universal Love and Equanimity. Later on, he will also discover the Four Noble Truths and the Noble Eightfold Path.

The experience of Waisak will be different in Indonesia as it is celebrated with a hint of local culture. Here are the most popular Waisak celebrations, each one different from the rest: 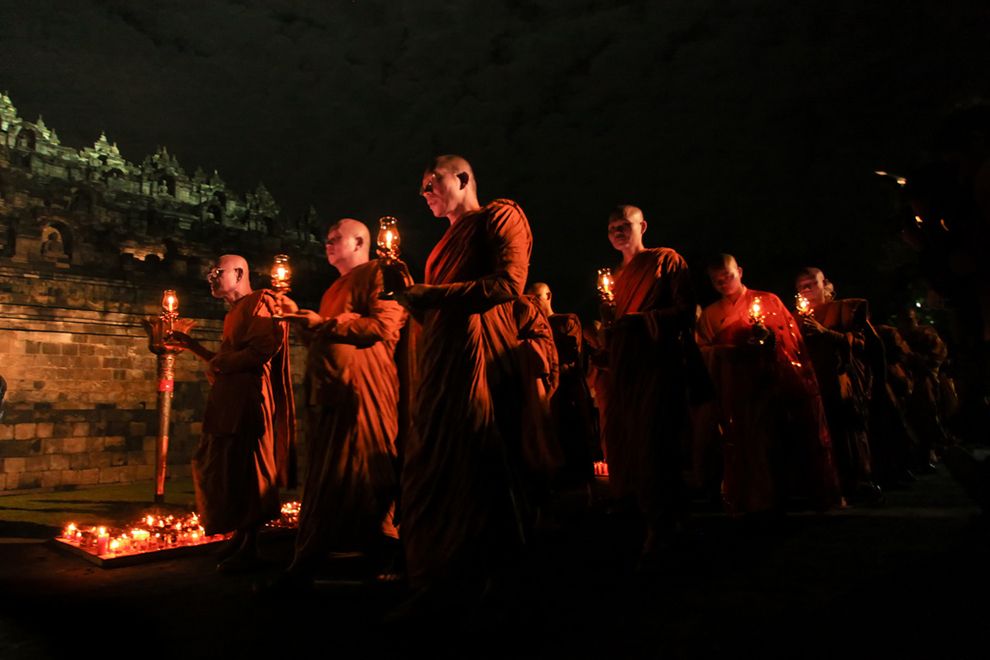 Borobudur temple is one of the main places to celebrate Waisak. Not only is it recorded as one of UNESCO’s World Heritage Site, but it is also the largest temple in the world. Buddhists from all over the world usually arrive at Borobudur ahead of Waisak to complete the ritual.

During Waisak, there are three pre-cursors before the celebration on Waisak. For the first ritual, eternal flame is taken from Merapen Grobongan and then blessed for the ritual. Secondly, water is taken and blessed from a water source in Jumprit, Temanggung. Pindapatta comes next, in which citizens at Mendut temple offer food to the monks.

One the eve of Waisak, Buddhists guided by monks and nuns will recite the sacred paritta and the great sutras while carrying the tools of worship such as the replica of the Buddha, blessed water, fire of Dharma and the Tripitaka scriptures to Borobudur temple. After prayers, lanterns will be flown to signify happiness and in the hopes that it will enlighten the whole world and that their prayers will come true. 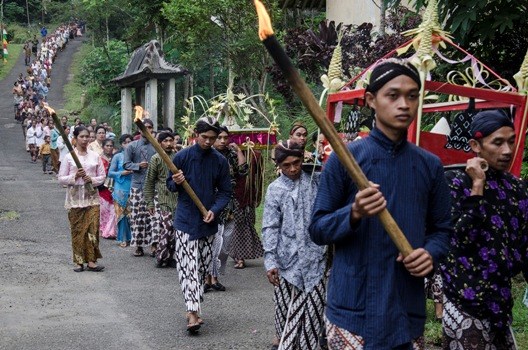 In Yogyakarta, Buddhists celebrate Waisak through the grand carnival of Kirab Agung Amisa Puja. This parade is held with the statue of Buddha and citizens using traditional Javanese garb. By wearing Javanese traditional clothes, the community also signifies unity with the culture in that area.

The entourage will also carry various sesajen that includes nasi tumpeng, Waisak water and fire which will be buried in the courtyard of the Giriloka Vihara. After the carnival, Buddhists will perform puja bakti (prayers) and read the sacred paritta (sacred book) of Waisak until the end of Waisak. Finally, the occasion will be closed with the celebration of darma sakti. 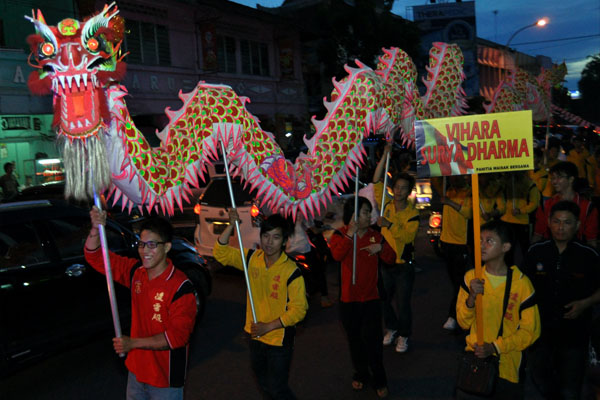 Similar to Yogyakarta, Pekanbaru also has a parade to celebrate Waisak. In this parade, many people included symbols of Buddhism and perform puja (ritual for prayers). Prayers in this march are made in the hopes that Indonesia is always blessed by God Almighty, the Buddha, and the gods.

The parade, held in the afternoon usually consists of participants including Buddhist religious institutions, educational institutions, Chinese organizations and schools. There are also influences of Chinese culture such as Barong sai, dragon attractions, and cars decorated with Buddha statues and colorful lights. This march is considered one of the ways to honor Buddha. 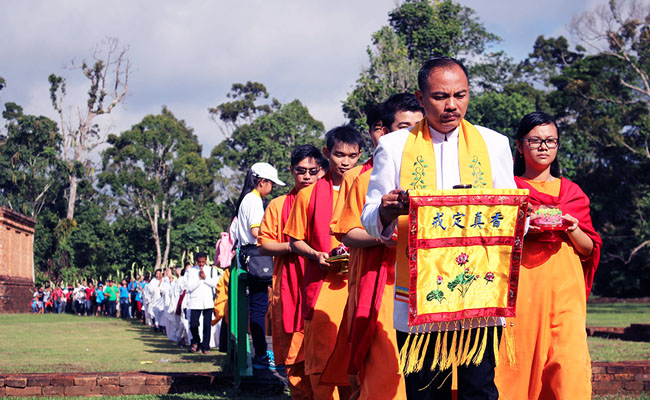 After Waisak celebrations in Borobudur, Waisak Celebration in Muara Temple is the second largest celebration. It is usually held in the Muara Jambi temple complex. The ritual starts with Buddhists circling the temple complex and praying, in which they end with the meditative prayer led by the monk. After the ritual is over, Buddhists will finally release lanterns in the early hours.

Indonesia’s condition as a country rich in culture affects the ongoing celebration of Waisak, as many Buddhists from various cultures, traditions and backgrounds unite for this occasion. For them, Waisak is a chance to strengthen and unite the minority population in various parts of Indonesia. For other Indonesians, it is an opportunity to practice acceptance and tolerance for loved ones celebrating Waisak.