Penjor or Janur Kuning are yellow coconut leaves that have been shaped or formed in intricate designs for various uses from traditional toys to ceremonial affairs. What’s more interesting is that depending on its shape and the designs applied to it, the more symbolism there is to it.

Janur kuning has been used from the ancient times in Indonesia, when ancestors used it for ritual purposes. In the past, coconut trees are said to be gifts from Dewi Sri, the goddess of fertility. Therefore, presenting janur kuning symbolizes the feelings of gratitude and thankfulness. Not only that, but it also reflects Indonesian culture in which coconut trees are abundant. In modern times, janur kuning is used in almost every ceremony in Indonesia from religious blessing to secular celebration, from local festival to national holiday. It has been so deeply embedded in Indonesian local culture that there is a saying: before janur kuning curves down, I won’t give up to get you. 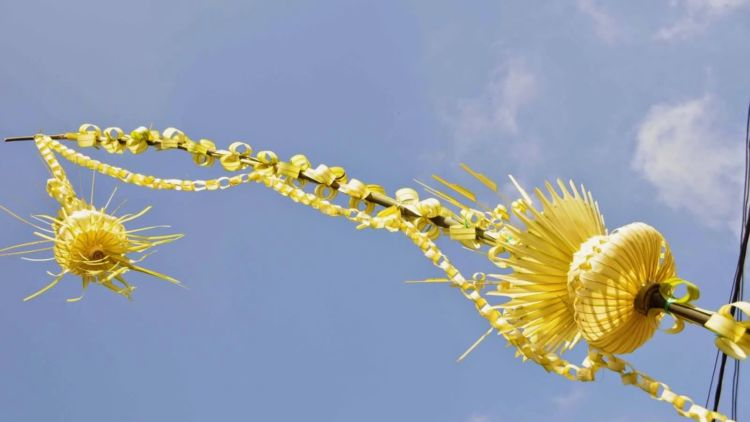 Janur kuning contains a lot of meaning and symbolism for Indonesians. However the name ‘Janur’ itself is inspired by Arabic and Javanese phrase of ‘sejatining nur’, which means light, clean and pure. This manifests into hope to be given a bright and clear future ahead and to be at ease against difficulties in the future. Meanwhile, the word ‘kuning’ comes from the phrase ‘sabda dadi‘, which translates to prayers that all wishes from a pure and sincere heart and soul will be granted. Especially in wedding, janur represents light, building a new life together, giving birth to new life that will hopefully bring blessing and helpful for the family and others. All in all, janur kuning is a hope and prayer that they will get blessed by God. This hopefulness is also manifested into ceremonies that are done with proper procedures.

Janur Kuning around the world

The popularity of Janur Kuning is not only in Javanese areas and Bali, but also in Malaysia as well. This is because due to its ribbon-like shape, the leaf can easily be woven and cut into a variety of shapes.

During Idul Fitri, it is used as a rice cake wrapper known as ketupat in Indonesia as well as neighboring Malaysia.

During holidays such as Vesak and Christmas, it is used to decorate altars in certain local temples and churches.

Bali is an exception for janur is used more widely there. It acts as a decorative object rather than just due to religious reasons or ceremonial affairs. No matter the timing whether on weekends or holidays, but everyday and every time.  Here, you will be able to find some of the finest and most complicated janur kuning crafts to be found. 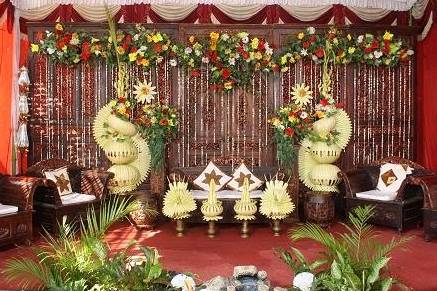 Gegar Mayang or Mayang Sari is common in Javanese weddings. The art of arranging this one leaf is usually placed on the right and left side of the aisle chair. Mayang sari is approximately 180 cm high, 2 in number, the shape may be the same or different depending on taste. The parts consist of the crown (which has fans, fruits and flowers), upper body, lower body and placemat. In Javanese wedding ceremonies, a pair of ornamental combinations of coconut leaves, fruits, and flowers are displayed on the edge of the wedding ceremony, which are called twin mayang (kembar mayang) as a symbol of the union of two individuals in a household. Made from a series of coconut leaves or banana tree trunks, several fruits and five colored flowers. Meanwhile, the whitish color of the leaf is expected to be a prayer so that love and affection between the bride and groom are always young and bloom like a leaf. Mayang twins symbolize that the bride and groom must have the same feeling between her heart and will.

Made since the midodareni event (beautifying the bride) and measuring one meter, kembar mayang is made in pairs. These parts are the placemat, body, and crown. Usually it will be carried by men and women accompanied by a pair of sengkir gading. There are four janur leaves contained in the kembar mayang, arranged and woven to resemble a keris (traditional sword) and has the meaning of protecting from harm and being careful in navigating married life. Janur is also formed in the form of grasshoppers to avoid obstacles that fall on them as well as the form of an umbrella for protection, and the shape of a bird symbolizing a dove that is always loyal. 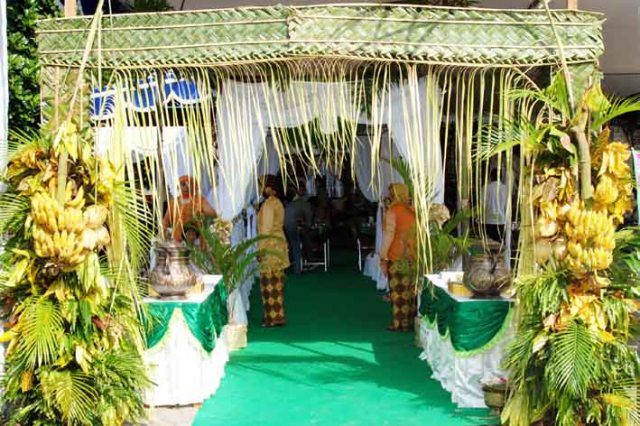 Tarub is a curved decoration at the gate / entrance to a traditional wedding celebration. Tarub is usually placed at the entrance to the wedding ceremony and is passed by the bride and groom, the procession of guests and family (usually the place where the traditional ceremony of pasrah tampi to the bride and groom is held). Tarub is decorated with leaf woven in such a way, usually it is also decorated with flowers and crops such as bananas, coconuts and so on. 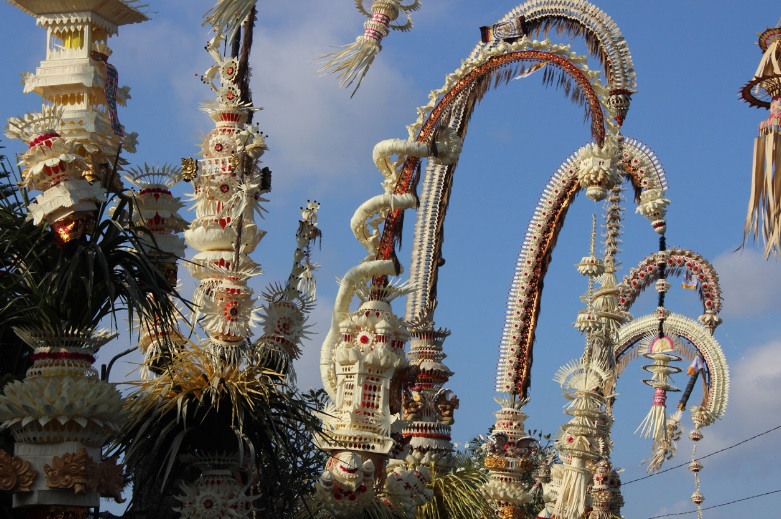 In Bali, there are two penjor: sacred penjor and ornamental penjor. In Balinese, penjor comes from the word Enjor. This word means to ‘show something’. The sacred penjor is used at certain times, places, and conditions such as in religious activities, one of it includes Galungan. Meanwhile, the banners that are usually installed before the wedding venue are called ornamental penjor. These two penjor consist of different equipment, as the sacred penjor is more complete. Meanwhile, ornamental penjor are installed freely without special provisions, but there are some complementary accessories from sacred penjor that cannot be in ornamental penjor. As already mentioned, the making of penjor must be done by following the rules that have been passed down from generation to generation. The materials used to make penjor must be from elements that exist naturally in the world. You will not find penjor made using factory processed ingredients in Bali.

Some items that should not be installed in ornamental penjor are the items used for the sacred penjor. There are many meanings to penjor, including the items used to make the penjor. Since it is made from elements that exist naturally, penjor is a form of gratitude for the Hindus to Sang Hyang Widi Wasa for the prosperity bestowed upon them.

That is not all, as penjor is also related to a mystical story about the Goddess Durga. One of the most popular Galungan origin stories include the battle between the forces of good and evil. The winner, destroyer of evil Goddess Durga wanted to make sure that humans would always remember the importance of this eternal battle. She then commanded the king of Java, Sri Jaya Kasunu, to establish a cyclical celebration to honor these principles. But Durga did not stop with the ceremonial command. She also insisted that penjor should be erected by every home to signal the honoured guests – the gods and the ancestors – that they would be honoured wherever a penjor stood. Ideally, the penjor is erected after 12 o’clock noon as a symbol that people have won against unclean thoughts, battles against negative qualities, and ego traits.

Other than that, one of the most commonly held beliefs about penjor is that it is a symbol of Gunung Agung, the spiritual mountain in eastern Bali. Since it is also the home of gods and ancestors, it is said by many to represent the holy Hindu Mount Mahameru, thus symbolising the entire universe. We can see this interpretation in the penjor, in which the top is Agung’s peak, and the stem of the penjor, with all of its decorations, represents the rivers flowing down the mountainside, bringing the fullness of the earth to the people below.

On the other hand, others declare that the penjor represent powerful dragon deities called nagas. The head of the naga is at the base of the penjor just above the small offering shrine called the Sangah Arda Cahndra. The tail of the naga is the slender tip of the penjor, and the scales of the dragon’s back are represented by the decorations which curve along the penjor’s back.

However, that is not all as a penjor represents human nature. Some say that the straight part of the bamboo represents the “good” in humans, while the curve represents the “bad” and thus must be decorated beautifully to compensate. The curve of the penjor, with its back straight and its tip looking down to earth is to remind people that although they may have achieved a high status in life, they must never lose sight of their less fortunate fellow humans. The shape of the penjor that goes downwards remind us that we must always remember our common roots, in which we are all born of our mother’s womb, and this common origin confers on us a common responsibility for each other’s welfare.

Nowadays, penjor is not only used for ceremonies in Bali but is also available as a janur kuning in Javanese custom. For weddings, it usually only consists of a curved bamboo with janur kuning curved into a hanging tip. For this reason, this penjor is used to welcome guests who come, usually with the name of the bride and groom alongside it so as not to confuse guests of multiple weddings. 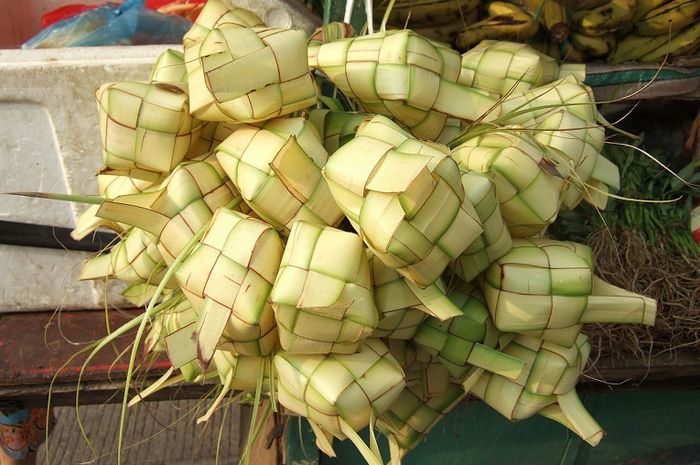 Janur is the seed of coconut leaves, while the coconut tree itself is a plant that is known to have all parts of the tree being useful from fruit, flowers (manggar), leaves, sticks, to the trunk. Janur is often used as food wrap, for example ketupat or kupat, sticky rice lepet etc. 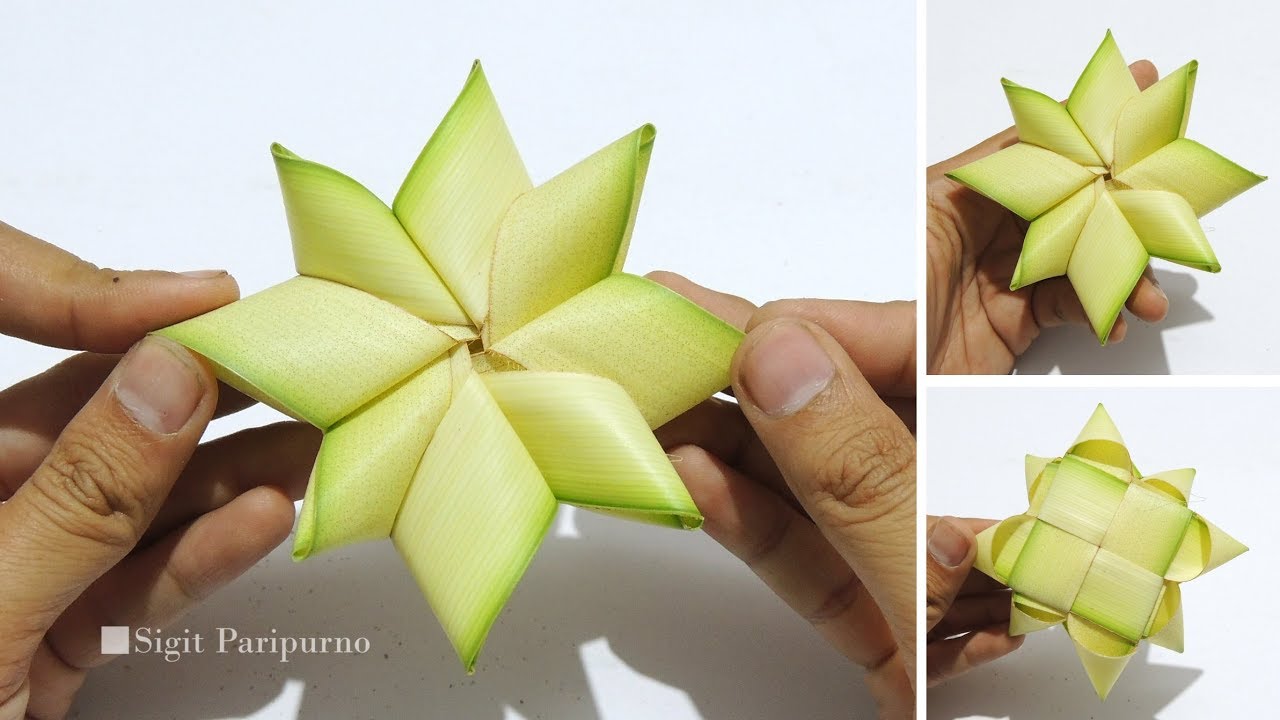 Janur has many benefits, functional values, and high aesthetic value. In the right hands, coconut can be used as a craft material with high economic value. Besides that, coconut can also be used as a base material for making traditional games, traditional children’s toys and handicrafts (flowers, origami, keris, whistles, flower bouquets, etc.).