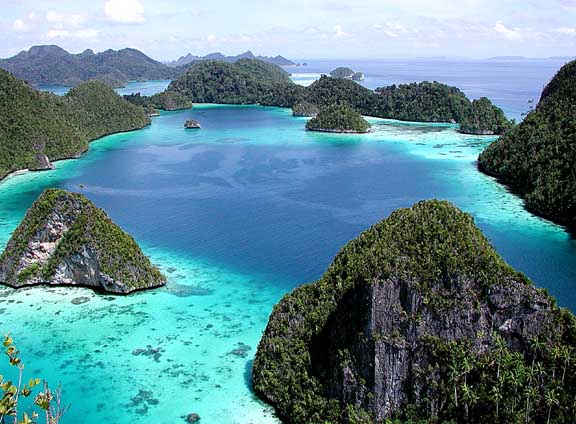 It was the Spaniard Ynigo Ortiz de Retes who, in 1545, gave the name Nueva Guinea to a strip of land on the north coast of the world’s second largest island (after Greenland), which is now half Indonesian, half Papua New Guinean territory. Irian Jaya, the western half of the island, is Indonesia’s biggest province of about 410,000 square kilometers, representing almost 21 percent of the country’s total land area. More than 75 percent of the land is covered by dense tropical forests, with only about 1.5 million people, with an average population density of 2.8 persons per square kilometer, the lowest in Indonesia. Jayapura, the neat provincial capital on a hillside overlooking the bay, is 3,520 kilometers away from Jakarta.

Irian Jaya is a land of exceptional natural grandeur. Its jungles are among the wildest, most impenetrable in the world. Eternal snow capped mountain ridges more than 5,000 meters high, with walls plunge hundreds of meters down onto floors filled with small glacier lakes. It has scenic beaches in abundance as well as immense stretches of marshlands. Cool grassy meadows lie at the foot of the towering mountains. Rivers cut through dark forests until their sluggish, crocodile infested mouths disgorge the water into the sea.

The highest peak of the central mountain range is Puncak Jayawijaya (5,500 meters). Second and third are Gunung Trikora (5,160 meters) and Gunung Yamin (5,100 meters), respectively. The biggest lake is Paniai, followed in order of declining size by the lakes Ronbenbai and Sentani, both in the vicinity of Jayapura, and Anggigita near Manokwari.

On the basis of physical features and differences in language, customs, artistic expression and other aspects of culture, the indigenous people of Irian Jaya are distinguished into about 250 sub-groups, although they all belong to the Melanesian race, and are related to the people inhabiting the islands along the southern rim of the Pacific. The Negritos are believed to have settled on the island first, probably some 30,000 years ago, followed by the Melanesians. The people of the central highlands still maintain their ancestral customs and traditions, and are virtually untouched by alien influences. Most of the changes have so far taken place among the coastal people, who are being subjected to ever increasing contacts with the world outside. This process of change is being accelerated by the work of missionaries, who have been working for many decades among the local populations. The people of the north and west are mostly Protestants, while those of the south and of the hinterland around Enarotali are Roman Catholics. Those around Fakfak and the Raja Ampat Islands are mostly Moslem. Animism is still practiced by isolated tribes in various parts of the province.

Although Irian Jaya is famed for its Bird of Paradise, the province’s fauna is not particularly rich. Almost all the animals here are of the Australian fauna type. Copper, oil, timber and sea products like fish and shrimps are among the province’s main products.

Jayapura is the capital and the biggest city of this easternmost province. It is a neat and pleasant city, built on the slope of a hill overlooking the bay. General Douglas Mc Arthur’s World War II quarters still stand here. The Museum Jayapura is located inside the Cenderawasih University campus. Tanjung Ria Beach, known as base G by the Allies during World War II, is a popular holiday resort with facilities for water sports.

From Skyline in the hills behind the city, one gets a beautiful view of Jayapura, Jotefa and Humboldt bays and the lake Sentani area.

There is a settlement on the shore of this lake not far from Jayapura where one can observe local traditions as they are practiced in the daily lives of the people. The short trip from Jayapura, pleasant as it is, offers a little foretaste of the province’s magnificent sceneries.

Biak, a town built on the rocky soil of an island of the same name on the rim of Cenderawasih Bay, is Irian Jaya’s gateway. A big Indonesian naval base, it has an infrastructure that is better than in most other places in the province. Japanese caves are found near Ambroben.

There are some good beaches on Biak island, the most popular of which are Bosnik on the east coast, good for swimming and skin-diving, and Korem on the north coast, where one can watch young men dive for pearls. Supiori Island, just north of Biak, has a recreation forest and villages where visitors are welcome.

Named after the big casuarina trees which grow in the area, Kasuarina Cape is just two kilometers from Sorong town on the Bird’s Head peninsula of northern Irian Jaya. Good for swimming and recreation.

The Asmat people who live along the remote southeast coast around Agats are famed for their artistic “primitive” woodcarving. Modern civilization did not reach this area until recently. Agats has an interesting museum filled with woodcarvings and other objects.

The area, however is still largely untamed wilderness. Asmat crafts received a boost in the late 1960s under a United Nations supported project to encourage local craftsmen to keep alive their art. Daily flights are available between Jayapura, Jakarta and Ujung Pandang. In addition, there are weekly flights to and from Ambon, Surabaya and Bali.

Places in the vicinity of Jayapura such as Skyline and Lake Sentani can be reached by taking a minibus. Biak has air and sea links with Jayapura. Sorong, is also served by air from Jayapura. Other destinations are reached by car or boat, or by light aircraft. 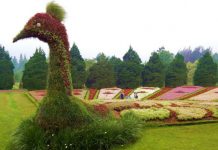