We celebrate this 10-day-long festival every year. But how many of us know what Ganesh Chaturthi is and why it is celebrated?

Ganesh Chaturthi or “Vinayak Chaturthi” is one of the major traditional festivals celebrated by the Hindu community. It is observed in the Hindu calendar month of Bhadrapada, starting on the shukla chaturthi (fourth day of the waxing moon period). Typically the day falls sometime between August 20 and September 15. The festival lasts for 10 days, ending on Ananta Chaturdashi, and is traditionally celebrated as the birthday of Lord Ganesha.

According to Hindu mythology, Lord Ganesha is the son of Shiva (The God of Destruction in the Hindu Holy Trinity of Creator-Preserver-Destroyer) and Parvati (Shiva’s consort). The cutest and most lovable Indian God, Ganesha or Ganpati

Revered as the deity of auspiciousness and wisdom, Lord Ganesha is also famous for being a trickster and for his profound sense of humor. More on the symbolism behind Ganesha here>>

Ganesha is known by 108 different names and is the Lord of arts and sciences and the deva of wisdom. He is honoured at the start of rituals and ceremonies as he’s considered the God of beginnings. He’s widely and dearly referred to as Ganapati or Vinayaka. 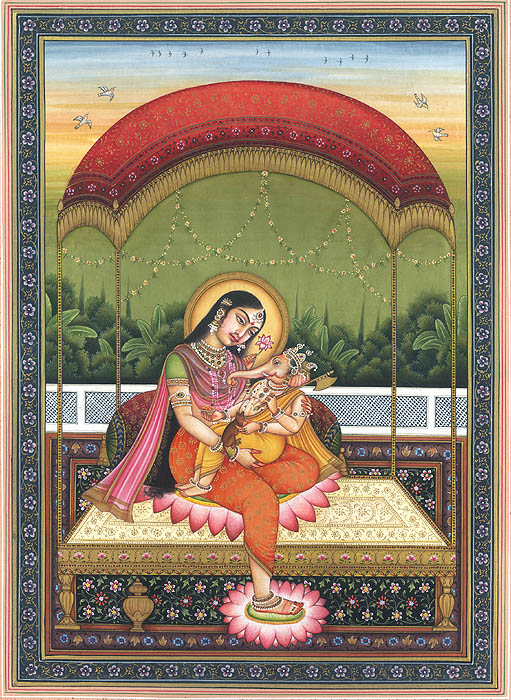 Ganesh Chaturthi is celebrated in the states of Maharashtra, Tamil Nadu, Karnataka and Andhra Pradesh and many other parts of India. The festival is so popular that the preparations begin months in advance. Days before the actual worship, homes are cleaned and marquees erected at street corners to house the idols of the Lord. Elaborate arrangements are made for lighting, decoration, mirrors and flowers. The artisans who make the idols of Ganesha vie with each other to make bigger and better sculptures. The sizes of the relatively larger ones range anywhere from 10 meters to 30 meters in height. These are installed in marquees and in homes prior to the Puja (worship). During the festival days, the Lord is worshiped with great devotion and prayer services are performed daily. The duration of the Lord’s stay varies from place to place; once the worship is complete, the statues are carried on decorated floats to be immersed in the sea after one, three, five, seven and ten days. Thousands of processions converge on the beaches to immerse the holy idols in the sea. This procession and immersion is accompanied with dancing and the sound of exciting drum-beats, devotional songs and exploding firecrackers. As the idol is immersed amidst loud chants of “Ganesh Maharaj Ki Jai!” (Hail Lord Ganesh), the festival comes to an end with pleas to the Lord to return the next year with chants of “Ganapathi Bappa Morya, Purchya Varshi Laukariya” (Hail Lord Ganesh, return again soon next year).

After the final offering of coconuts, flowers and camphor is made, people carry the idol to the river to immerse it.

Here are some quick facts about the festival:

Modak, a sweet dish prepared using rice or flour stuffed with grated jaggery, coconuts and dry fruits – is the favorite sweet of Lord Ganesha and is especially prepared for the prayers. The plate containing the Modak is supposed to be filled with twenty-one pieces of the sweet. 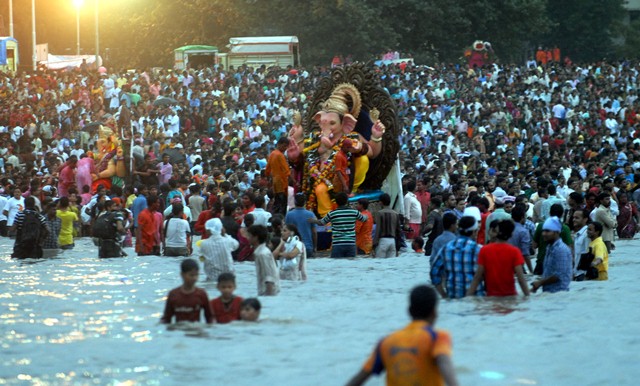 While celebrated all over India, Ganesh Chaturthi festivities are most elaborate in states like Maharashtra, Goa (It is the biggest festival for Konkani people all over the world), Gujarat, Karnataka and Andhra Pradesh, and other areas which were former states of the Maratha Empire. Outside India, it is celebrated in Nepal by the Newars. Lord Ganesha is also worshiped in Thailand, Cambodia, Indonesia, Afghanistan, Nepal and China.

In the 21st century, with the world turning fast into a global village, Ganesh Chaturthi is now celebrated all over the world, wherever there is a presence of a Hindu community.

How Ganesha Got His Head
The story of the birth of Lord Ganesha, as depicted in the Shiva Purana, goes like this: Once goddess Parvati, while bathing, created a boy out of the dirt of her body and assigned him the task of guarding the entrance to her bathroom. When Shiva, her husband returned, he was surprised to find a stranger denying him access, and struck off the boy’s head in rage. Parvati broke down in utter grief and to soothe her, Shiva sent out his squad (gana) to fetch the head of any sleeping being who was facing the north. The company found a sleeping elephant and brought back its severed head, which was then attached to the body of the boy. Shiva restored its life and made him the leader (pati) of his troops. Hence his name ‘Ganapati’. Shiva also bestowed a boon that people would worship him and invoke his name before undertaking any venture.

Another less known story of his origin, found in the Brahma Vaivarta Purana: Shiva asked Parvati to observe the punyaka vrata for a year to appease Vishnu in order to have a son. When a son was born to her, all the gods and goddesses assembled to rejoice on its birth. Lord Shani, the son of Surya (Sun-God), was also present but he refused to look at the infant. Perturbed at this behaviour, Parvati asked him the reason, and Shani replied that his looking at baby would harm the newborn. However, on Parvati’s insistence when Shani eyed the baby, the child’s head was severed instantly. All the gods started to bemoan, whereupon Vishnu hurried to the bank of river Pushpabhadra and brought back the head of a young elephant, and joined it to the baby’s body, thus reviving it.