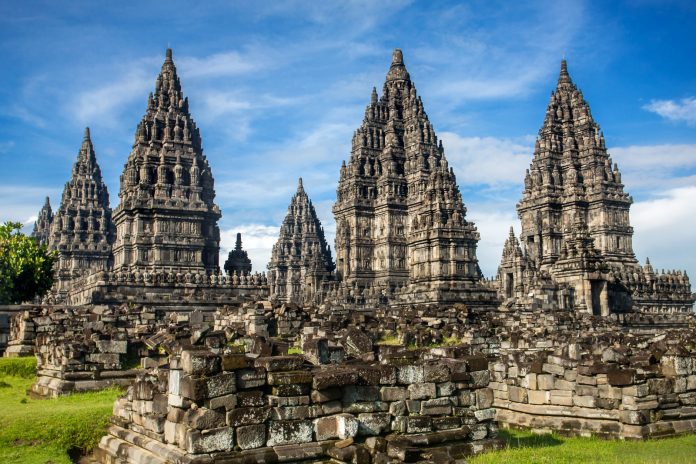 Prambanan Temple soars 47 meters into the sky embellished by reliefs telling the epic of Ramayana and Krishnayana, the beauty of this Hindu temple is beyond compare.

Since Hinduism came from India to Indonesia, the design of the temples is in Indian style in many aspects, such as the constructing techniques, architectural style, and decorations.

The ground plan of Prambanan follows the Hindu system of Vastu Shastra, which literally translates as science of architecture and is laid out according to a mandala, or geometric pattern that represents a microcosm of the universe.

Over time, Prambanan deteriorated and became surrounded by a dense jungle. The Dutch explorer C. A. Lons reported his “rediscovery” of Prambanan in 1733 CE to Dutch colonial officials, but the temple was never completely forgotten by the Javanese in their histories, myths, and legends. Prambanan was completely in ruins for years until 1937 when the reconstruction started, and it is still far from complete. Subsequent earthquakes have further led to it ruin. In fact, that’s the first thing you’ll notice as you walk into the park of Prambanan as the stone ruins of 224 outer temples lay scattered.

A very popular Javanese legend is that of Rara Jonggrang, which is set in Prambanan and its neighboring temples. In the legend, a Javanese princess named Roro Jonggrang’s beauty attracted a prince named Bandung Bondowoso. He asked her to marry him but Roro Jonggrang had a condition (to politely turn down the proposal without insulting Bandung Bondowoso), she demanded a thousand temples to be built overnight. To her surprise, the prince said that he would do as she demanded.

Bandung Bondowoso then requested the help of a horde of spirits to build the temples in a single night. When the 999th temple was erected, Roro Jonggrang ordered the villagers to light fires and pound rice using large mortars. The spirits thought that the sun had risen and ran like hell. Enraged by the princess’ trickery, Bandung Bondowoso cursed her, turning the princess into a stone statue to complete the 1,000 temples.

This statue statue of princess is said to be beautiful image of the Hindu goddess Durga located within the north wing of Shiva’s temple at Prambanan.

Prambanan is the biggest and most complete remains of Java`s period of Hindu culture, built in the middle of the 9th century AD, around 50 years later than Borobudur. Little is known about its early history, but it is believed that it was built by king Rakai Pikatan to mark the return of a Hindu dynasty in Java after decades of Buddhism. Prambanan was completely in ruins for years until 1937 when the reconstruction started, and it is still far from complete.

The tallest temple is Shiva temple in the middle, inside the main room, you will find Shiva statues, and three other rooms are occupied by Shiva’s wife (Durga), Shiva’s son (Ganesha) and Shiva’s teacher (Agastya). The Brahma temple has a Brahma Statue and Vishnu Temple has a Vishnu statue.