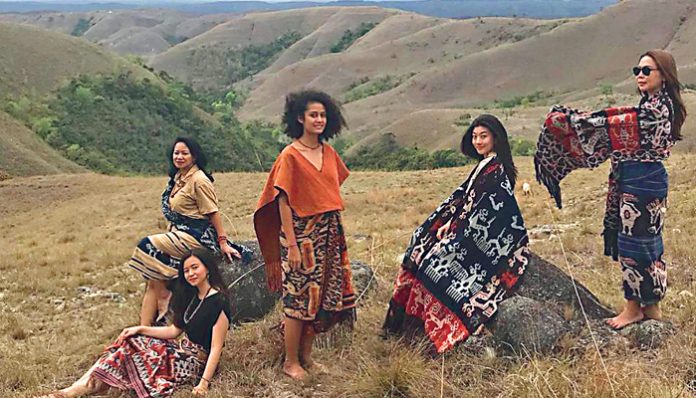 Indonesia is rich in culture. From food, rituals to traditions, each area has distinctly different or a mix from other cultures surrounding it. Textiles and clothing are another aspect of culture that cannot be left behind as it is a very important part from everyday life to cultural rituals. Sumba is no exception, with numerous different ‘ikat‘ from every area that has been passed down from one generation to the other.

Ikat made in Sumba is not a cloth that can be created by just anyone, as the process is complex and lengthy starting from collecting materials in the forest to making ikat weaving. The process usually takes 2 to 3 months for regular sized ikat to 5 months if it is large in size. Amazingly, all Sumba cloths passes 42 stages of work process and can not be done alone.

Here are different textiles that are exclusively in Sumba area:

This woven cloth is usually worn by Sumbanese woman over their shoulders to complete their traditional attire. The central design of the Tiara Haringgi is called kapaki rianja, the dancing frog. In dry areas like Sumba where rain is vital, the appearance of frogs signifies that their prayers are heard by God.

The Tiara Haringgi is a textile that is only used during cultural ceremonies, which is why is it is of high value. Making it is also a difficult process as well, for the pattern requires planning before starting the process. As the pattern has to be decided in advance, the weaver has to have a specific image of the pattern in their minds then insert as many as several hundred heddle sticks into the unwoven threads on the loom.

Besides from that, there is also a second more narrower type of tiara. This one is patterned with ikat instead of supplementary warps. It is sometimes used as a headband to hold in place a large tortoiseshell comb. This tiara is specifically used by men, folded so that one fringe points upwards while the other drapes over one temple. The symbolism to this arrangement is that it connects the wearer to the ancestral spirits of both heaven and earth.

The Lau Hemba Kiku Kawadak is specifically worn by a high-caste servant called a papanggangu during a Sumbanese royal funeral. They are responsible of escorting the dead nobleman in his funeral procession.

During the procession, the papanggangu will be adorned with a heavy, waist length veil. As she slips into a head-induced trance, the spirits of ancestors take hold of very body and direct the funeral procession.

While other textiles in this list have stayed the same throughout generations, Lau Pahudu Hada is made with a combination of traditional styles which has changed throughout the centuries. Due to the marriage of the Princess of Pau with the royal family of Rindi in East Sumba, textiles have also changed to become an innovative combination of styles.

While the supplementary warp patterning technique is called pahikung, the particular style and motifs in the ikat sections come from Rindi’s royal heritage. The karihu or seashell motif made into the textile was once the exclusive domain of the Rindi royal family. Meanwhile, bead colors of blue, black, white and red are specifically used for the highest nobility.

Hinggi are exclusively worn by men, typically used by folding one across the shoulder and the other around their waist. Its designs identify the man’s rank in the social order, his clan as well as help his ancestors to recognize him in the next world. The motif on this hinggi determines the characteristics of the man himself, arranged in as many as eleven bands of varying width. Even in death, a man will be covered with his hinggi. 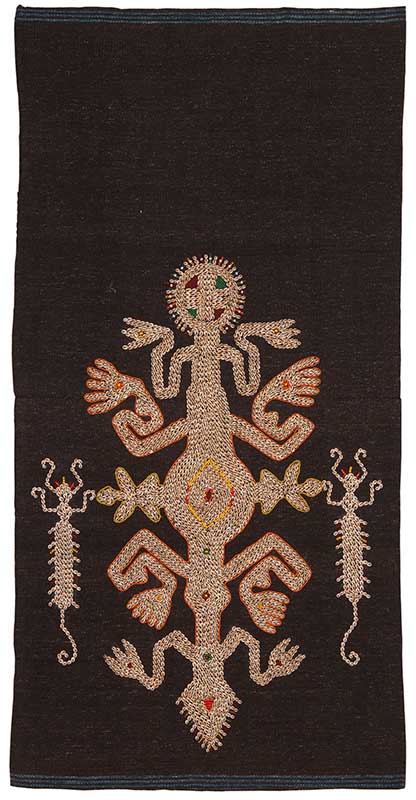 This piece of textile depics marapu, who is the first deified ancestor of the clan. The all-knowing marapu has the power to take active part in everyday events, while his protection is invaluable to the clan. Marapu’s face can never be seen and is never shown, even in the cloth.

Back in the day, East Sumbanese queens give the lau witikau ngeri to their daughters on their wedding day in order to bless the new branch of the family with marapu’s powers. After their deaths, their lau witikaus would cover the upper bodies of the king and queen during their funeral processions.

Lau Pahudu Rara are tubular sarongs from Rindi in Sumba that depics semi-mythical figures that were first to arrive in Sumba named ‘marapu uma ndapa taungu’ (translated as ‘the first to arrive’). Usually there would be dominant motifs of seashells (called karihu), which recalls the sea journey that brought the ancestors to Sumba. As the ancestors are revered by the village people, so do the same reverence to ancestral motifs. Only a woman of wealth and rank would wear a symbol like the karihu.

If it comes with a kambhiha or the ‘horse’s hoofprint’, only certain people could wear such attire. This is because horses are deemed sources of wealth in Sumba. Horses are part of the bridewealth gift exchange at marriage, and a riderless horse leads the bodies of the noble dead to their massive stone tombs.

Lau Humba is a two-part tubular textile worn daily by the women at Hama Parengu and within the Kanatang cultural group. Additionally, what sets this cloth apart from others is that it uses natural indigo dye with additional colored sections. The decor consists of an embroidered motif of dragon, horses, or birds on the bottom panel. It’s also known as a lau pakambuli and worn for special occasions.

Hama Parengu village still maintains its Marapu beliefs of following the traditional ways of caring for the land and maintaining strong social ties.

Lau pakapihak ningu njering is a two-panel textile sewn into the shape of a tube and worn as a woman’s sarong. This is also a daily wear for Sumbanese women, especially in Hama Parenggu twenty to thirty years ago. This cloth also uses a mud dyeing technique using mud and several types of plants such as leaves of pahawuru (Phyllanthus sp.) and bark of pamohu, found in mangrove areas. Fringes in the motif are created by adding extra threads that are sewn to create a motif called ningu njering.

As been mentioned before, hinggi is a cloth that is used either over the shoulder or around the waist and is used exclusively by men. Teara Hinggi Duku is especially worn over the shoulder of a high ranking person along with a separate hinggi tyed around the waist. The hinggi shows qualities associated with the wearers characteristics and personal power during life and used to aid his journey to the next world after death.

Tera hita langga is a single-panel head cloth used by traditional priests (wunang) or elder men with status. The characteristics of this head cloth, is that it always a deep blue black colour with small strips made using pahitang floating warp patterning. It is usually worn with rau kadama.

Rau kadama is a single panel wrapped around the waist, which depicts a certain flowering plant (kadama) that is spoken of in stories and songs. It is dyed to deep blue black and has faint light blue horizontal stripes. The colors are enough indication that it is either worn by a priest (wunang) or elder male in Hama Parengu in East Sumba. This cloth is worn with the tera hita langga head cloth. This cloth originated from Hama Parengu, as its a part of the  Kanatang cultural group that uses natural indigo dyes for their textiles. In Sumbanese, tambakuku means shroud and kambar means beads. It is usually used as a ceremonial funeral wrapping for a woman. As per marapu tradition, this textile is the final textile used in wrapping the deceased member of a royal family. The body is tied into the fetal position and then wrapped with many cloths depending on the status of the woman, in which the numbers can add up to one hundred. This tambakuku utu kambar is the final wrapping that encases the entire body including the head and only leaving the face uncovered. This cloth is from the Umalulu cultural group in Sumba.

What do you think about these clothes? Tell us which one you like best in the comment section below!