Jakarta is a city that never sleeps. Food vendors are available at large, with a variety of food from different areas of Indonesia. With the large variety food vendors, it is no wonder that you can get confused with the street food offered.

Here are the most common street food in Jakarta: 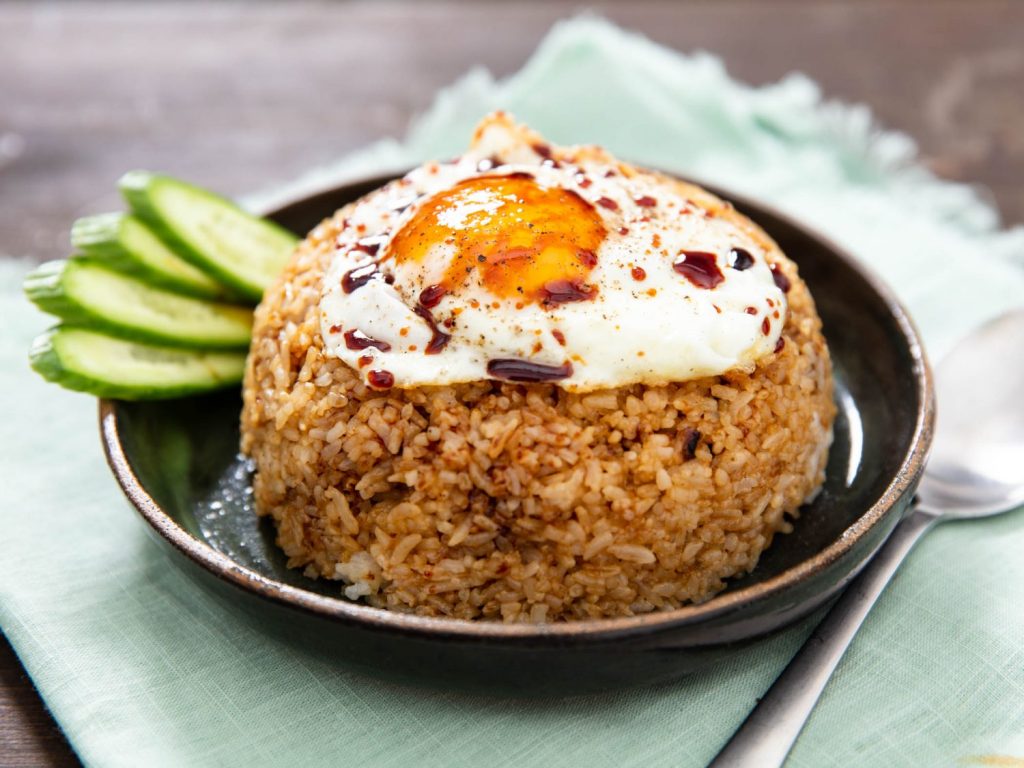 Nasi Goreng, which literally means ‘fried rice’ has become so famous internationally, that it is regarded as Indonesia’s national food. The fried rice is very particular to Indonesia, for it can be flavored however you like from vegetable, chicken part, beef, and other spices. However, compared to other fried rice, what differentiates it is the use of sweet soy sauce and mixed with pickled cucumber and tomatoes.

Martabak is Indonesia’s version of a pancake. This pancake is especially flexible, for you can find salty and sweet versions of the dish on the streets. Martabak manis is a soft pancake with condensed milk, peanuts, chocolate, Nutella, cheese and variety of other choices for the filling. Otherwise, you can also pick out Martabak Asin, a crispy, salty variety of the pancake that can be either made with egg or meat. 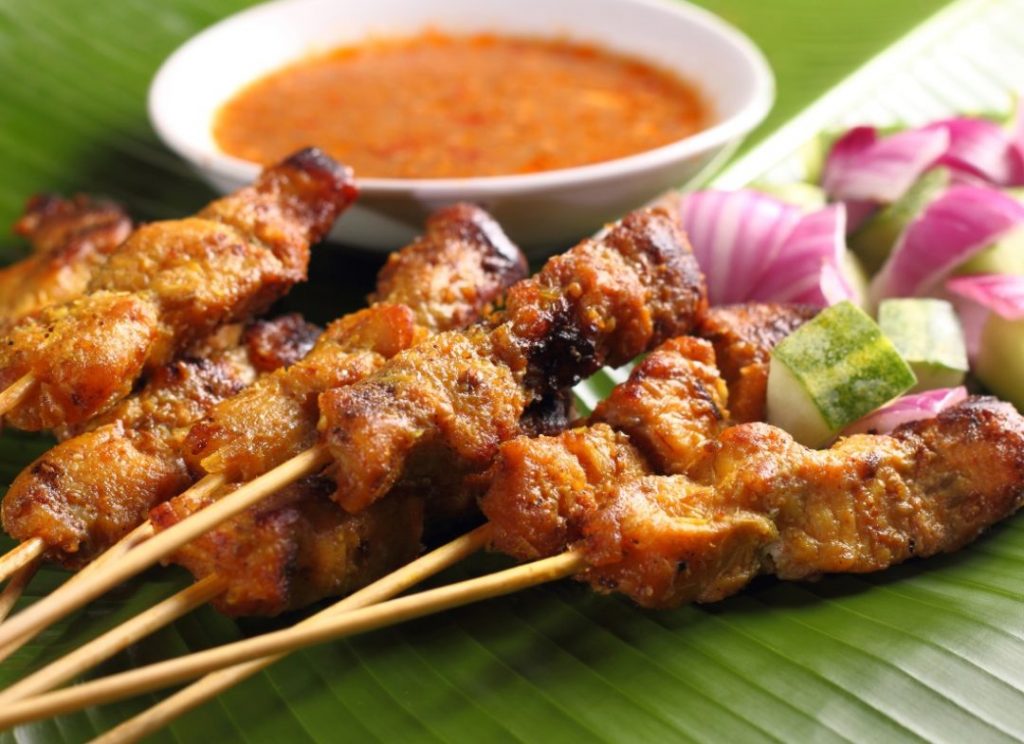 Satay is grilled skewered meat on a piece of bamboo stick, in which it is usually hand-roasted over a small coal flame. There are many variations of the satay from beef, chicken, goat, rabbit or even innards! Other than the different type of meat that it serves, there are also numerous condiments to eat with it. You can eat it with peanut sauce, with rice on a plate, with plenty of vegetables or even just on its own!

Fish meat wrapped in dough, then fried is called the batagor. You can usually eat this will peanut sauce and sweet soy sauce. Interestingly enough, batagor is the fried version of siomay, which is the same exact recipe but steamed. 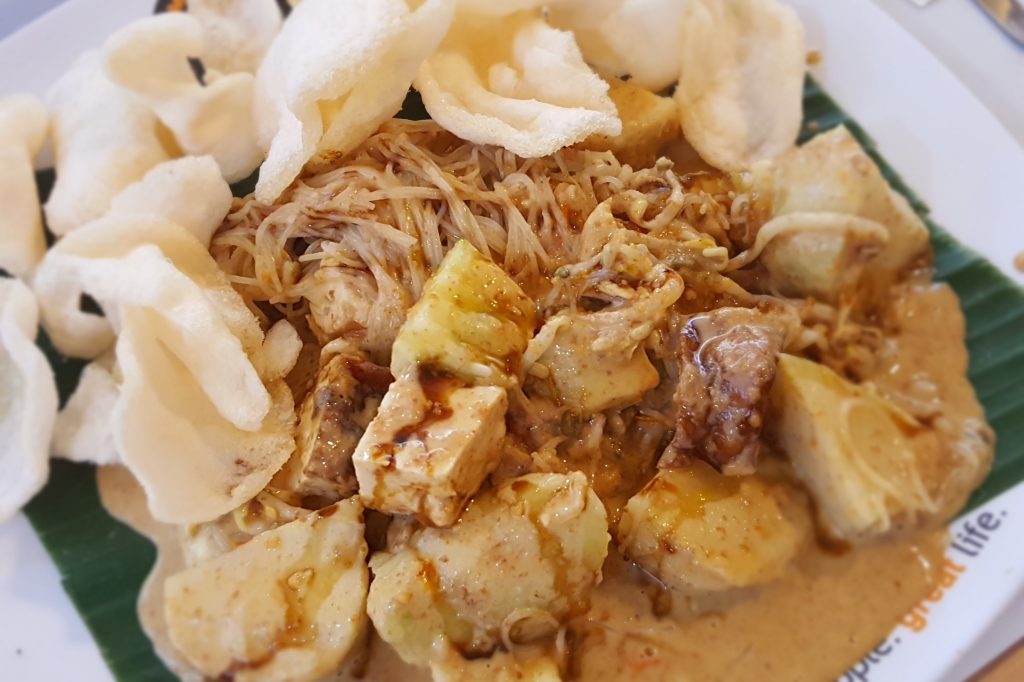 Fancy an Indonesian salad? Then you can most definitely try the ketoprak. This legendary street food is made of fried tofu chunks, lontong (Indonesian compressed rice cake), rice vermicelli, sliced cabbage, bean sprout and boiled egg. They are served with peanut dressing, fried shallots, rice crackers and spicy sambal.

Gorengan, which means “fried food,” is the most popular snack in the entire region. You can opt for different bases from banana to cassava, to tofu, yam and tempeh (fermented soy bean). Everything is deep fried and served hot. Dipping it in hot chili sauce is the best way to enjoy this greasy food.

Bubur is also one of the dishes with a variety of tastes. The most famous, undoubtedly is bubur ayam. This breakfast menu mainly consists of shredded chicken, cakwe, fried peanuts, chopped scallions and cilantro leaves. But bubur doesn’t always have to taste savory, for there are other choices of sweet bubur using mung beans (bubur kacang hijau), palm sugar (bubur sumsum) and many more.

Siomay is basically steamed batagor, served with peanut sauce, a bit of lemon juice and sweet soy sauce. But siomay itself is not served all on its own with condiments, rather served with various options like baked potatoes, boiled eggs, boiled bitter melon and fried tofu. 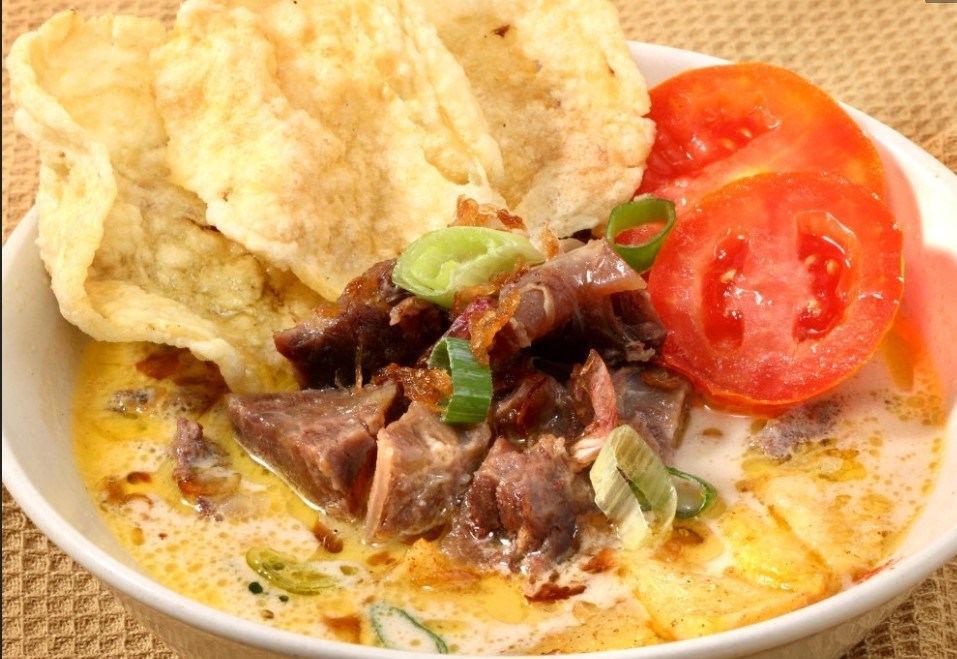 Soto Betawi is a spicy, tangy soup dish that you can frequently see in Jakarta. Rather than a soto dish with clear broth, soto Betawi is thick. Ingredients used are coconut milk, beef, along with aromatic spices like galangal and lemon grass. Visitors can have the choice of eating alone, or else with some steamed rice and condiments (fried shallot, emping crackers and lime juice).

Nasi Uduk is delicious steamed rice cooked in coconut milk, sometimes with bay leaves and lemon grass. Nasi Uduk becomes the main dish rather than the side dish, in which you can choose from a variety of dishes such as semur jengkol (giant stink bean stew), sambal kacang (spicy peanut sauce), balado stewed egg, fried vermicelli noodle, and sambal goreng tempe (sauteed tempeh).

Rujak is one of the most unique foods that you can try for an interesting twist on a health food. Rather than just eating fruits as it is, rujak is your favorite fruits with a bit of spice. The vendor would usually cut up your fruits of choice, put it in a plastic box along with toothpicks, and sweet and spicy sauce to add flavoring, along with savory flour.

Gado-Gado is the literal translations of ‘mix mix’, which is quite appropriate considering the ingredients that it needs. It consists of slightly boiled or steamed vegetables with boiled eggs, boiled potato, fried tofu and tempeh, and lontong (rice wrapped in a banana leaf) all mixed into one. As a final touch, everything is drizzled with peanut sauce dressing on top.

Pecel lele is a traditional dish in which fried catfish is served with rice and variety of side dishes. According to your taste and preference, the fried catfish can be eaten with tofu, tempeh, sweet and spicy sambal, vegetables and steamed rice.

Although Bakmi noodles were not originally Indonesia, it was first introduced by Hokkien Chinese immigrants. Bakmi in general is noodles with salty, savory clear broth but now have transformed into different versions. There is the simple bakmi ayam with broth, chopped chicken meat, and wonton; to bakmi goreng, a fried noodle preparation with chicken breast, broccoli, cabbage and mushrooms. All of these dishes cannot miss the side condiments like fried shallots and sambal.

Bakso is a warm bowl of meatball soup. Most of the time, the soup is served with egg noodle and vermicelli noodles, scallions, and a sprinkle of fried onions as the base. Although generally made with beef meat, egg, and a mix of tapioca flour, there are many flavors of bakso. You can normal bakso, textured bakso (bakso urat), with quail egg fillling, cheese or even different types of meat in the middle of the Bakso.

The soup itself is filled with various side dishes like vermicelli, egg, beansprouts, or other veggies like bak choy. Add your preferred amount of sambal (chilli sauce), vinegar, or sweet soy sauce (kecap manis) as final touch to the dish.

Pempek is made from fish and tapioca, originally from Palembang in South Sumatera. Interestingly, there are different shapes to the pempek from pempek kapal selam, pempek lenjer, round, curly and many more. another special type of pempek are ones with boiled egg incorporated in the middle. Usually, Pempek is smeared with shrimp flour and mixed with a dark dipping sauce made from vinegar, chilli, and sugar.

Which street food have you tried? What do you think about it?