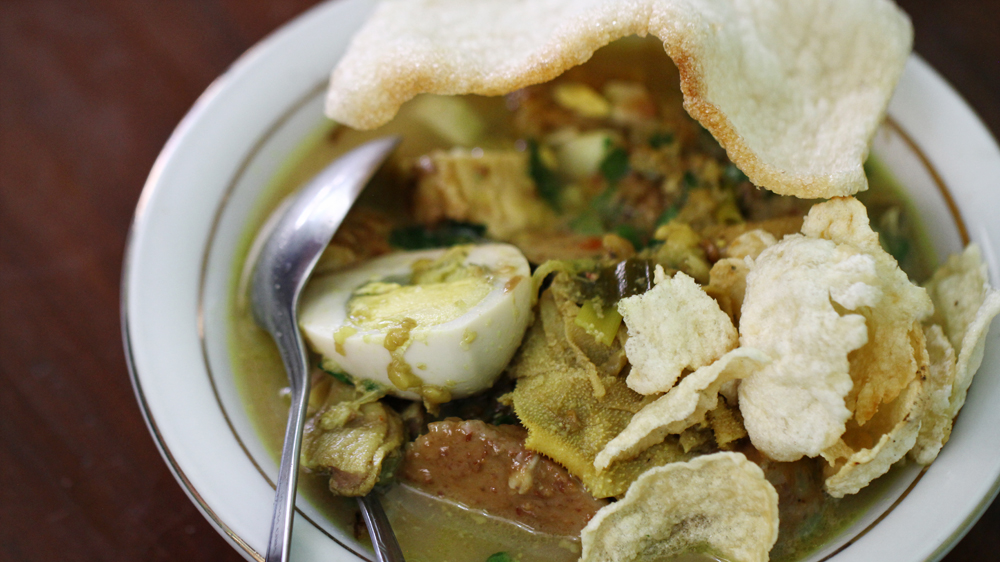 Rujak is a traditional fruit and vegetable dish that can be found all over Indonesia. The word means mixture or eclectic mix in colloquial Malay. It is considered one of the most popular snacks in Indonesia, mainly due to its diverse flavors. The ingredients and flavor of each rujak will be different according to the preference of the area that it originated in. By eating rujak, you will be able to experience the overall culture, but they will also experience the history of cuisine in that particular dish.

Here are the 9 must-try rujak in Indonesia: Rujak Juhi is one of the popular dishes that originate from Jakarta itself. Juhi is thought to come from Hokkien language. This version of rujak is considered much different than other typical rujaks, because it closely resembles the gado-gado. Ingredients used to make this dish are yellow noodles, a mix of cucumber, vegetables and slices of potatoes. The peanut sauce used to douse it consists of ground peanuts, chilli, vinegar, sugar and onions. Juhi, the unique ingredient used in this dish is a type of squid that is fermented, cut widely, dried then grilled.  Other than that, you can choose between wet or the much more dryer variety. Emping crackers and fried peanuts are added on top to add to the flavor of the dish. 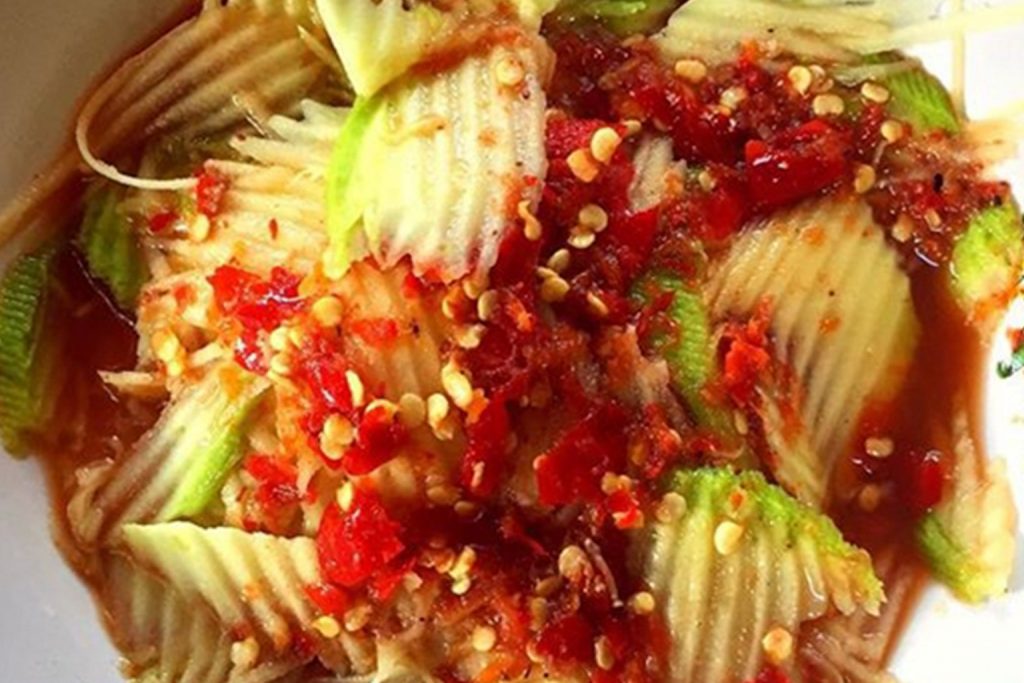 Bali itself has a rujak that has become one of its signature dishes, called the Rujak Kuah Pindang. Pindang refers to fish that is salted, seasoned and smoked or boiled until dried. First, seaweed is boiled then mixed with seasoning which includes grounded chilli and terasi (shrimp paste). The fish is added to a mixture of slices of fresh fruit, unripe mangoes, pineapple, guava, and Mexican turnips. A variety of flavors starting from sour to spicy can be found in this dish. Finally, this dish is topped with fried soybeans.

It is said that the ideal time to eat this dish would be when it is hot outside, as this dish contains a variety of flavors from spicy, savory, a bit sweet while also being crunchy from the seaweed and soybeans. 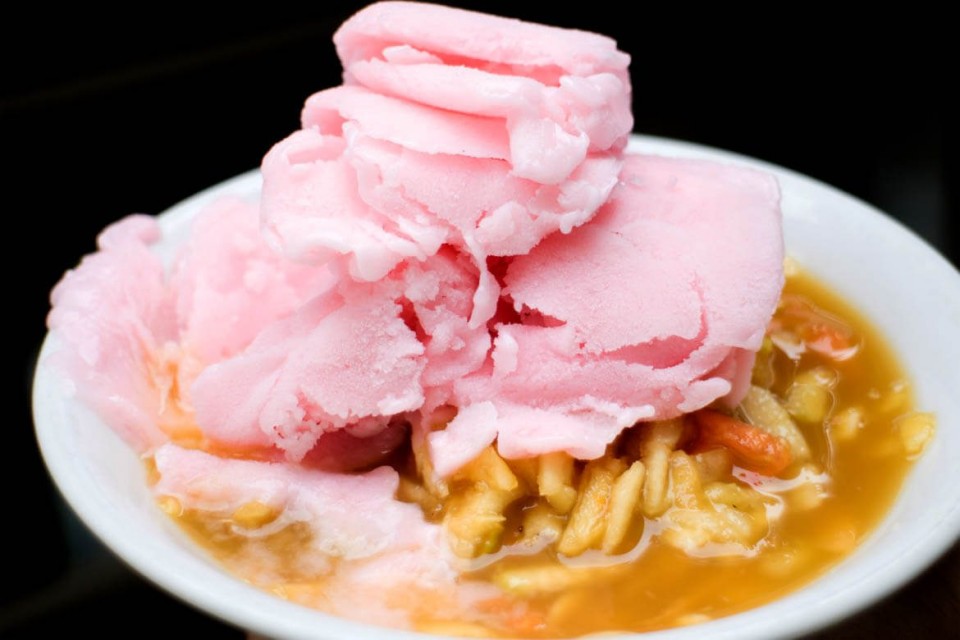 Yogyakarta serves something different compared to the other places serving rujak. Instead of staying traditional with spicy sauce and fresh fruit, there is an addition of ice cream to the mix. All that is needed to prepare this dish is fresh fruit of your choice from unripe mangoes, papayas, pineapple, Mexican turnips, cucumber and some ice cream as the topping. Ingredients for rujak sauce is still the same as other areas, which is palm sugar, chili, tamarind, kencur and a bit of water. According to visitors, the sweetness of ice cream lends an especially fresh taste to the rujak. The spicy taste, combined with the coldness of the rujak also makes this dish particularly addictive. 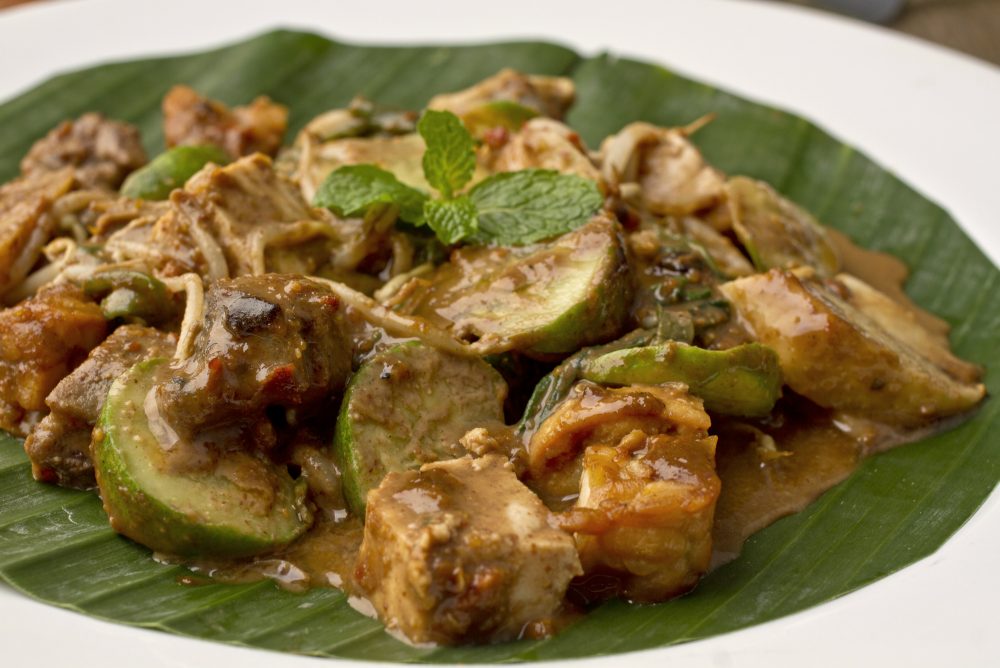 Visiting Surabaya will not be complete without tasting rujak cingur. In Javanese, cingur means mouth. This is because the main ingredient for this dish is the snout or mouth of the cow. Usually, the snout will be boiled and served with Mexican turnips, noodles, pineapple, mangoes, brussel sprouts, cucumber, kale, long beans and kedondong. Sliced to small pieces, the snout is said to have a soft and chewy texture. To top it off, the dish will be given a generous amount of savory peanut sauce mixed in with petis (shrimp paste) to enhance the overall flavor of the dish. This dish may also have ingredients like lontong, tofu and tempe.

Nasi Tempong is not the only dish in Banyuwangi that is well-known. Rujak soto is considered one of the dishes that visitors should try. This rujak dish is a combination of rujak cingur and soto babat.  It is made by crushing various boiled vegetables like kale, Brussel sprouts with groundnuts, brown sugar and petis. People can enjoy it served with soto and accompanied with rice or lontong. As the final touch, the dish will be given an adequate amount of savory and warm soto soup. 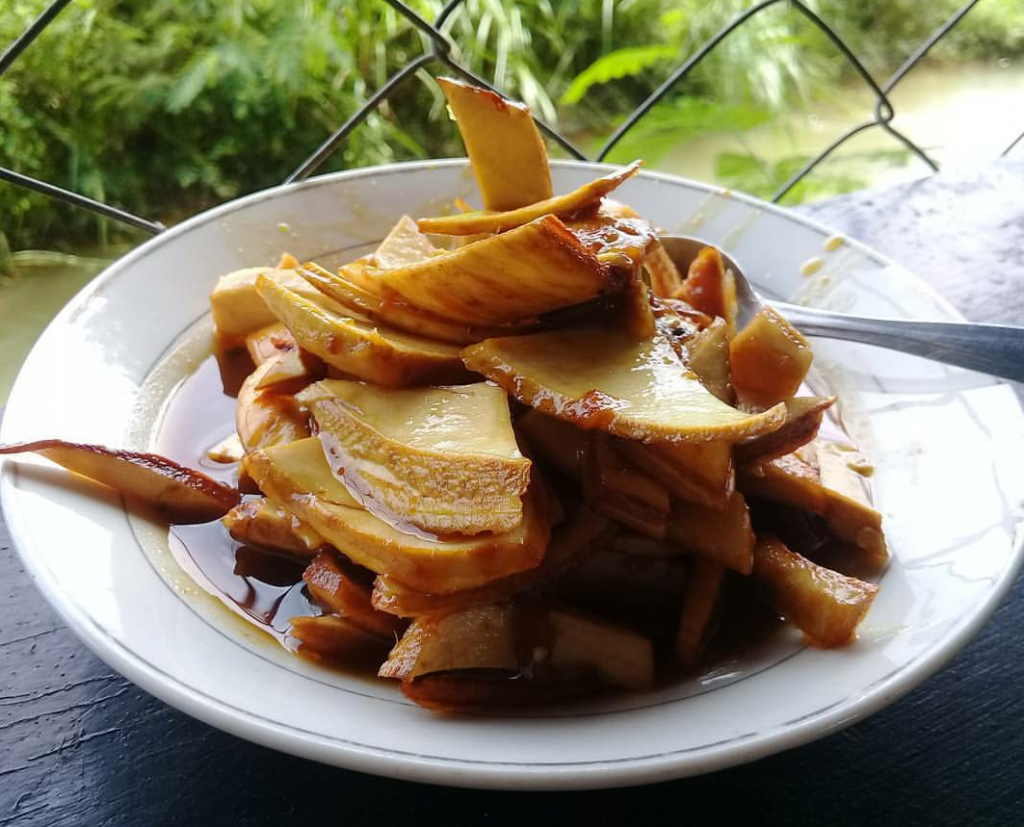 This rujak dish is said to be very delicious to eat when the weather is hot. It is the specialty of Serambi Mekkah called Rujak U Groeh. Ingredients that are included in this dish are the meat of a young coconut, papaya, carrots and rumbia fruit. Not to forget are the chili, palm sugar, ice, salt, groundnut and orange juice. The sauce of this rujak dish is especially different as it uses mango juice, which is then mixed with brown sugar water, bread flour, lime juice and chili.

According to those who have tried it, the crunchy texture of the coconut mixed in with the sweet, sour and spiciness of the sauce creates a unique blend of flavors. Unfortunately, this rujak is only available at Aceh. 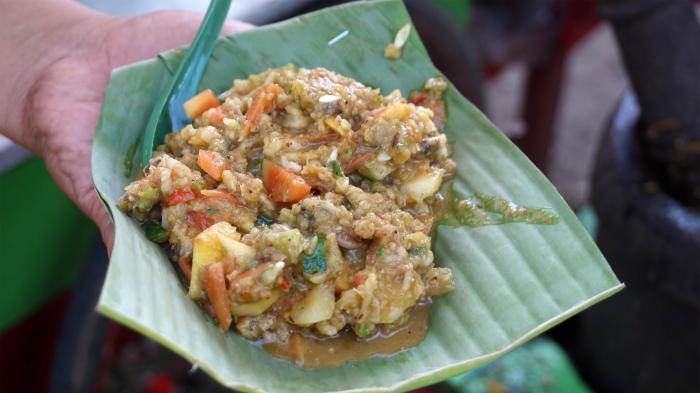 Bebek comes from the Sundanese language that means grounded. Another word for rujak bebek is gobet. Ingredients used in this dish include unripe mangoes, pineapple, cassava, pomegranates, kedondong, papaya, starfruits, brown sugar, cayenne pepper, terasi and salt. All of these ingredients will be ground until smooth using a special equipment. Afterwards, the sauce will be poured over fresh fruit. Uniquely, vendors would serve this rujak on a banana leaf. The spoon would also be made of banana leaf, in order to maintain the aroma of the rujak itself. 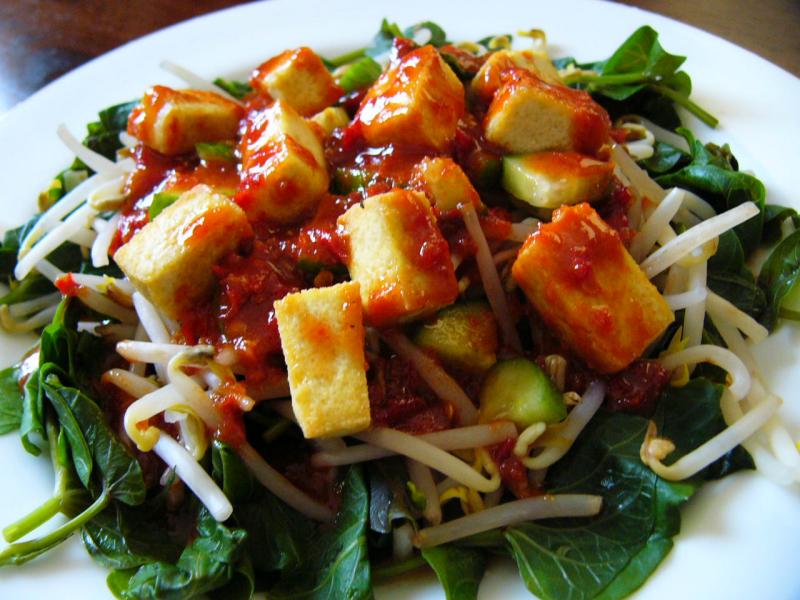 Rujak terasi looks especially terrifying, as the soup is the intimidating shade of red. Originally made in Lombok, the ingredients are more or less the same with other rujak ingredients which includes fresh fruits that are thinly sliced. The most unique thing about this rujak is that it uses two sauces including brown sugar sauce and red soup, which mainly consists of cayenne peppers and terasi. Some people would even claim that rujak terasi is much spicier than other types of rujak.

Rujak is one of the dishes that is extremely popular in Indonesia. Not only do they contain a myriad of flavors, but they are also appropriate to eat during brunch, lunch or even during the evening as a snack. Moreover, each rujak would taste differently for different areas in Indonesia. Those who have a preference can make their rujak taste spicier, sour, savory or sweet. Whichever you choose, you get to enjoy the delicious Indonesian dish while also delighting yourself in your flavor.

Which rujak dish is your favorite? Tell us in the comment section down below!