The ancient as well as present Rishi-Munis, Yogis have preached in their Shastras that until an aspirant learns the ved mantras, deeply reflects over them and whatever preach exists in ved mantras is held in life; then mere studying and chanting of ved mantras will be of no use for him. So is the case of Gayatri mantra that if the aspirant does not follow the above procedure then mere chanting of Gayatri mantra will not serve the purpose. Rigved mantra 1/164/39 also throws light that if an aspirant only listens and chants ved mantras even for whole of life but he does not follow and hold the vedic preach as a result he does not know and realize formless and eternal God, Who creates the universe, nurses and destroys it therefore mere listening and chanting of ved mantras will not be beneficial for him.

If we study ved mantras traditionally under the guidance of learned Acharya of Vedas and AshtangYog who by virtue of his pure intellect, has gathered the extract of immortal ved mantras in his heart, then we find that the aspirant will enjoy with all comforts and glory etc., in this life as well as in next births (reference Samved Mantras 1298,1299,1300).

Keeping in view the said ved mantras, we must also pay our full concentration and attention towards Gayatri mantra which is also mentioned in three Vedas, wherein the best prayer to purify and to enlighten the intellect with divine knowledge exists, which we have to attain.

Knowledge of Vedas emanates directly from God. As the God is a deep, astonishing matter so are the Vedas. Therefore to get proper idea of the Gayatri mantra, we must concentrate deeply on word- Dheemahi, the meaning of which is that we are doing meditation. So, if we merely chant and listen to Ved mantra and do not meditate then we are telling lies that we are meditating. When the question of meditation arises then we must know that it is seventh part of Ashtangyog philosophy. So, to achieve motto of meditation, we will have to keep the preach of several ved mantras in mind to conclude that the intellect of an aspirant cannot be purified by learning or chanting only Gayatri mantra because there is a word in Gayatri mantra- “Dheemahi” which inspires that the aspirant must sit daily both times to meditate. And for meditation, we will have to learn preach of several other ved mantras because meditation (Dhyan) is the seventh part of AshtangYog philosophy and there is a fundamental law that until and unless an aspirant starts his practice of Yog philosophy right from the first part i.e., Yam, Niyam, Aasan, Prannayaam, Pratyahaar, Dharnna, he would never be able to meditate. (Yajurvedmantra 7/4 refer). He would sit but he would not be able to concentrate.

His concentration will always be unstable.

Therefore, you see, the intellect becomes pure only by getting vedic knowledge where the aspirant will have to study Vedas and holding the preach in life, then he will have to do practice of AshtangYog Philosophy. If intellect is not made pure then Yog Shastra sutra 2/20 states-

Shuddhoapi Though the soul, who resides within human body is pure (Pratyayaanupashyaha) yet he sees all the worldly matters based on the vritti (faculty which receives knowledge from five senses and passes the same to intellect is called Chitta and Chitta stores the effect of various karmas to be faced by soul in future at a proper time) of intellect.

Idea is this that whatever is the vritti of intellect i.e., good or bad; the soul thinks himself accordingly. So, the vritti and the intellect must be pure so that the pure/pious deeds are done. Accordingly, the vedas preach all the human-beings that if the aspirant follows vedic path, gains the vedic knowledge and holds the same in his daily life then only the intellect of the aspirant becomes pure. In this connection, Samved mantra 349 states that just like an owner of chariot takes the support of chariot to reach his destination quickly similarly an aspirant takes the shelter of ved mantras to perform yajyen, to praise, pray and to worship God from ved mantras by which the intellect is purified. And thereafter, the aspirant realizes God. Because all four Vedas preach that the said worship is performed by pure intellect and not by impure intellect. It shall not be out of place to mention that within pure atmosphere only, the pure matter is attained. Yajurved mantra 40/8 praises the God by saying that God is the purest and is always away from all kinds of sins as well as from the bindings of any kind of deed.

Therefore, by taking the shelter of the ved mantras, we must praise and worship the God so that our intellect becomes the purest otherwise the intellect of soul which is indulged in illusion and is entangled in vices like anger, sensuality, greed, pride, ego etc., then the soul naturally would claim himself according to the said vritti of intellect. Again we will have to think how an intellect becomes the purest. In this connection, Rigved mantra 4/24/4 states that an aspirant must desire to purify the intellect by (Yogey) doing practice of Yam, Niyam, Aasan, Prannayaam, Pratyahaar, Dharnna, Dhyan and Samadhi and from the same (Kratuyanti) by doing the pious deeds preached in Vedas; because in the absence of vedic knowledge and without doing practice of AshtangYog philosophy neither the intellect grows nor becomes pure.

This fact has also been mentioned in Manusmriti shloka 5/109 that by water the human body, by holding the truth, the mind and similarly “GyaneinbuddhiShudhyati” i.e., by attaining the vedic knowledge, the intellect becomes pure. Whatever the deeds from the senses and perceptions and by any part of the body of human-being is done, it is based on the intellect. Therefore, if intellect is pure, the deeds will be pure and pious otherwise the deeds of a person will be impure and sinful.

We must know that God has made the law in Vedas that the aspirant shall achieve his motto based only on his pure intellect. Here, we must pay our attention towards Gayatri mantra. First of all everybody must know that Gayatri mantra is a ved mantra and therefore to study, deeply reflect over it and to consider its meaning, idea etc., its chanting and learning must be according to vedic knowledge only. It is not a mantra which has been made by any Rishi-Muni, man-woman etc. Along with other mantras, this mantra also emanates directly from God. So, to study ved mantras, the complete vedic literature is required to be studied otherwise Atharvaved 12/5/40 states that person who does not study Vedas completely but takes a slight portion thereof like a small piece of a shirt which is torn and taken by a rat then God punishes him.

Therefore, if a person like a said small piece of cloth steals only on-two mantras like Gayatri mantra, Mahamritunjaya mantra etc., it means he becomes defaulter of Vedas vide Atharvaved mantra 12/5/40and God thus punishes.

In the Gayatri mantra, there is a prayer that may God enlighten our intellect with vedic knowledge and inspire us to do only pious deeds. Here, Rigved mantra 1/10/5 states that mere prayer will do nothing, aspirant will have to do hard accordingly. Further Rigved Mantra 10/70/8 states (Ieeda Devi Ghritpadi) i.e., while doing praise of God, prayer and worship (ManushyavatYajyam) in Yajyen performed by human-beings (SudhitaHaveengsheeJushant) use the mind, pure intellect and chitta {faculty which receives knowledge from five senses and passes the same to intellect is called Chitta and Chitta stores the effect of various karmas to be faced by soul in future at a proper time} etc., concentratingly. The Gayatri mantra has the said three matters i.e., praise, prayer and worship. Vedas state that when a person will use the said three matters performing the worship of God it means his worship is complete in all respects and if amongst the three, one or two matters are left then the worship will not be considered a complete worship. So, the Gayatri mantra is really a mantra which has all the three matters within it. See that “Bhuhu” , “Bhuvaha”, “Swaha”, “Savitaha”, Bhargaha”, “Devasya”, these divine words are used in the praise of God, secondly “Dheemahi”, this word is used for worship and third is DhiyoyonahaPrachodyat” which is a prayer to God to purify our intellect and inspire our intellect to do only pious deeds. If an aspirant does hard practice of AshtangYog Philosophy to purify intellect and get vedic knowledge by studying vedas along with daily prayer, worship and praise of God by chanting Gayatri mantra, offering aahuti of gayatri mantra, the aspirant does prannayam with Gayatri mantra properly along with its meaning under the guidance of learned Acharya then aspirant really completes worship of God and realizes God within him, say all four vedas.

Therefore we must do yajyen, practice of ashtangyog and while sitting on a pure asan must chant Gayatri mantra and must do prannayam with Gayatri mantra daily.

The Gayatri mantra which is mentioned in Yajurved, Rigved and Samved is as follows —

Meaning- Om [This is the name of God]
Bhuhu – Who is the base of human life and is more dear than breathing. Donor of vital airs. So, Bhuhu is also name of God.
Bhuvaha- by whose worship, the soul becomes free of sorrows. So, Bhuvaha is name of God.
Swaha- is the form of divine pleasure and who is omnipresent and holds the universe. So, Swaha is also name of God.
Savituhu- Who creates the universe. So, Savituhu is also name of God.
Devasya- Donor of all kinds of pleasure.
Varennyam- So the God who has said divine qualities amongst unlimited qualities is acceptable for worship.
Bhargaha- the purest and alive matter (Dhimahi) so, we hold and meditate (Tat) the form of said God.
(Yah) May the God, (Prachodyat) inspire our intellect to do pious deeds and enlighten our intellect with vedic knowledge. So that by using the pure intellect in worship and doing vedic pious deeds we realise the God and experience the divine pleasure and also get comforts and glory in present life as well as in future births.

In view of the above, the worship from Gayatri mantra is this that-

Calendar of Hindu Festivals and Religious Occasions in 2021 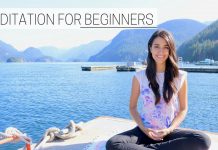 7 Simple Types of Meditation for Beginners