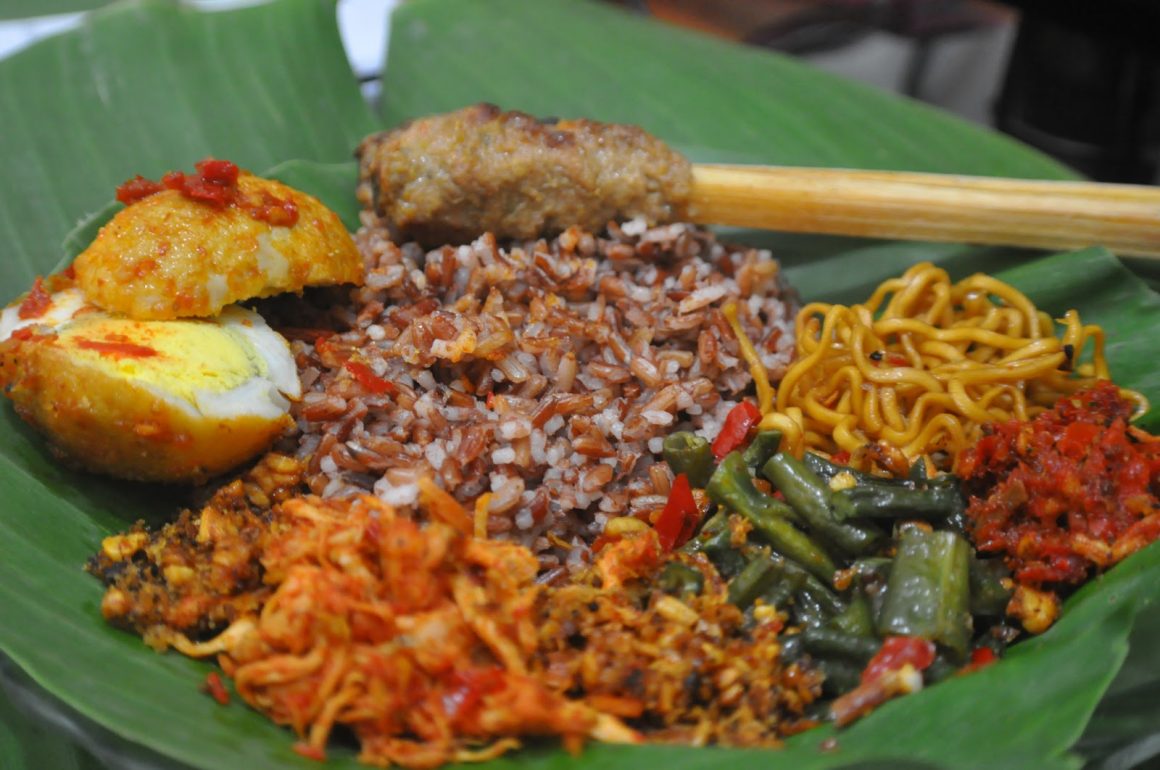 Bali is a land of culture, tradition and mystique. It was due to these traits that many people are attracted to visit Bali. But one part where people would miss is the rich culinary journey that many could have followed. Dishes in Bali are particularly unique, savory and delicious. Clearly, the types of menus are not something you can find anywhere else. For that reason, going on a culinary adventure is one of the things many should do.

Find out more about Bali’s most well-known dishes: 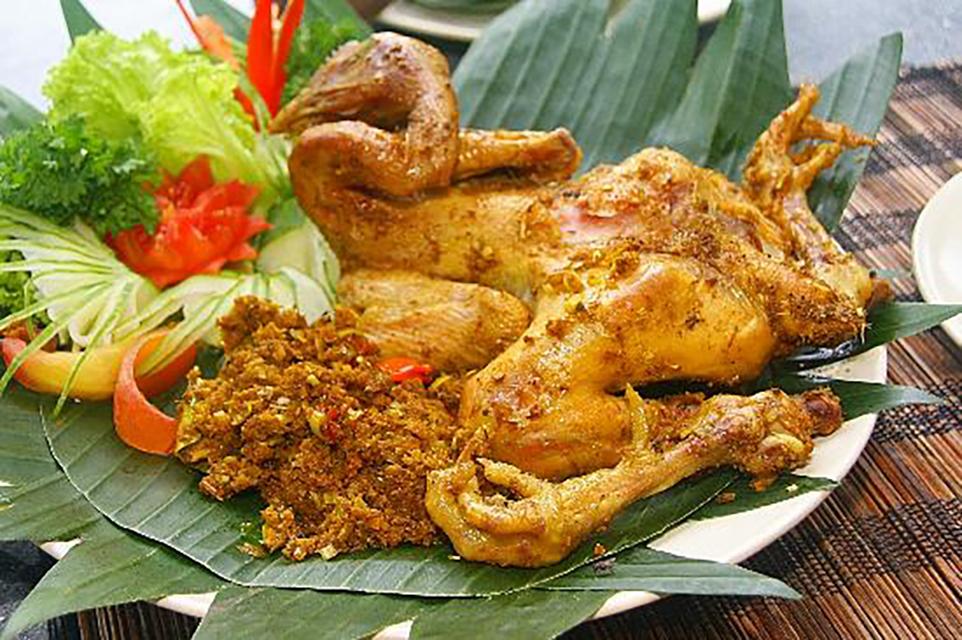 Betutu is a unique process where banana and betel leaves cover the meat. It is then roasted and buried underground for seven hours. After cooking for 7 hours, the dish will be perfectly marinated and the meat soft for eating.

According to many people, bebek or ayam betutu is savory and spicy at the same time. Those who want to eat it might need to be careful, for many claim that bebek betutu is a particularly spicy dish.

Yet both bebek and ayam betutu is extremely famous. At first, it is solely sold in religious celebrations or ceremonies, now it is widely sold from restaurants, warteg and even five star hotels. 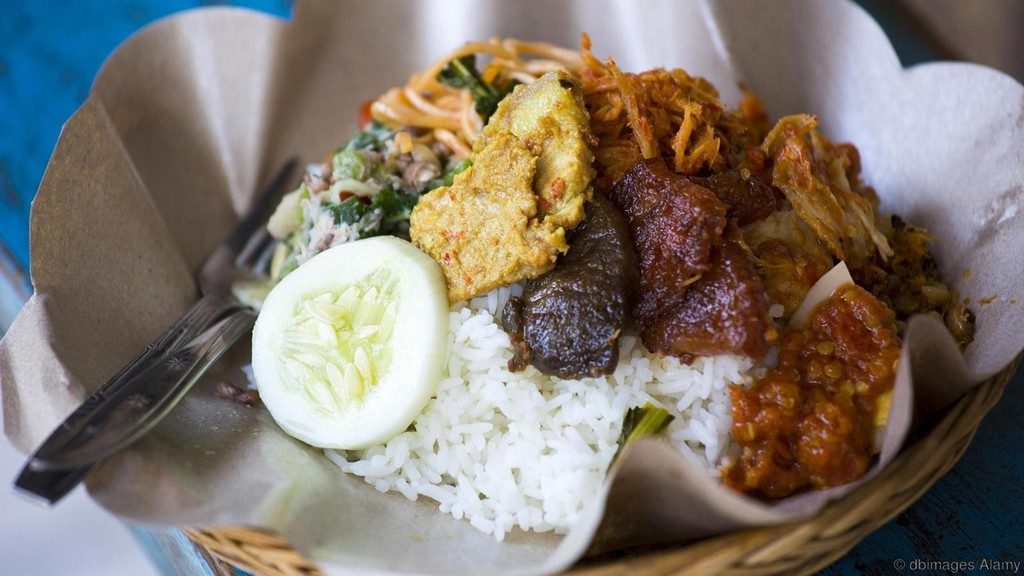 Pig roast has enjoyed a large reputation as being delicious-beating any other roast pig. Covered with seasonings before being roast, the meat is therefore sliced thinly to be served with lawar (more on that below). The taste is said to be particularly delectable that Anthony Bourdain declared babi guling as the best roast pig that he has ever tried. This dish has been particularly served in religious ceremonies as well, which is why it’s a dish that is closely related to Balinese culture and religion.

Other than bebek betutu, satay lilit is also one of the most famous Balinese dishes known all around the world. The cooking process is quite simple, in which meat (pork, chicken, whichever is preferable) is mixed with a variety of blended seasonings (coconut leaves, lime leaves, garlic, shallots and more). After a proper mixture, the solution is then molded into a lemongrass stalk to be roasted. It is favored due to its savory and spicy taste, which many are fond of.

Lawar is the Balinese version of a salad. It contains a variety of vegetables, spices, grated coconut and meat (sometimes contains some blood from the animal). Despite the queasy choices of food, it’s ideal food is to be paired with a suckling pig mentioned above. This food is also the savory variety, in which many has become addicted to the taste once they tried it. For that reason, you should definitely try the pork lawar while in Bali. 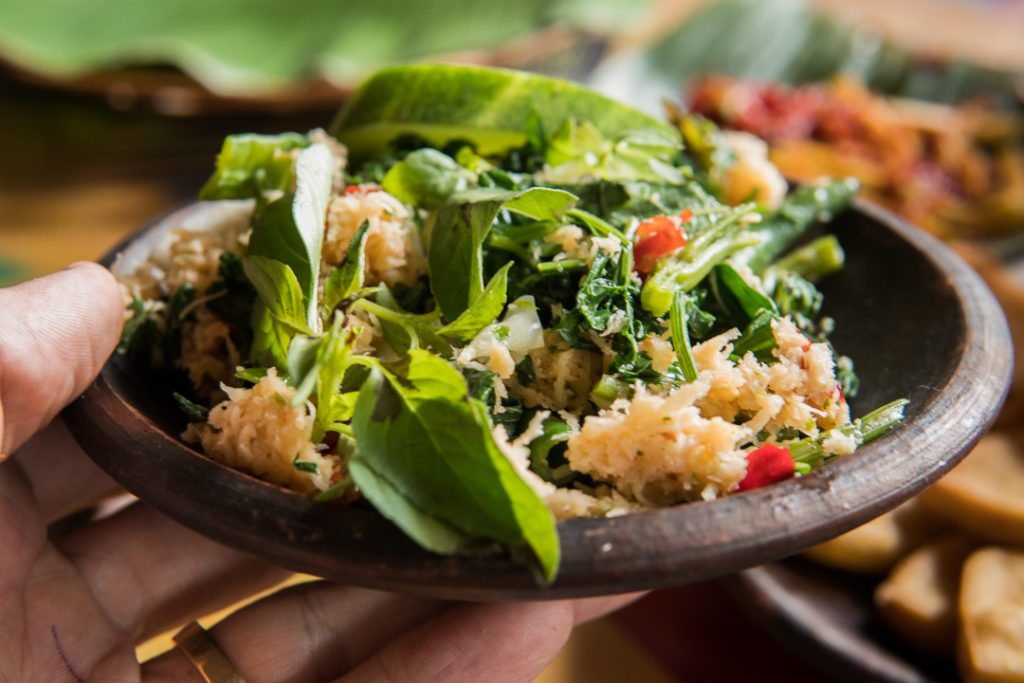 For the urab dish, it is not only present in Bali but also present in other cultures such as the Sundanese. Urab is also another version of Indonesian salad, in which bean sprouts, long beans, are mixed together with spicy coconut gratings. The taste is delicious, resulting in a dish that is salty, savory and slightly sweet. This dish can be eaten according to your preference from eating just that all on its own or rice with other dishes such as rice and other side dishes. 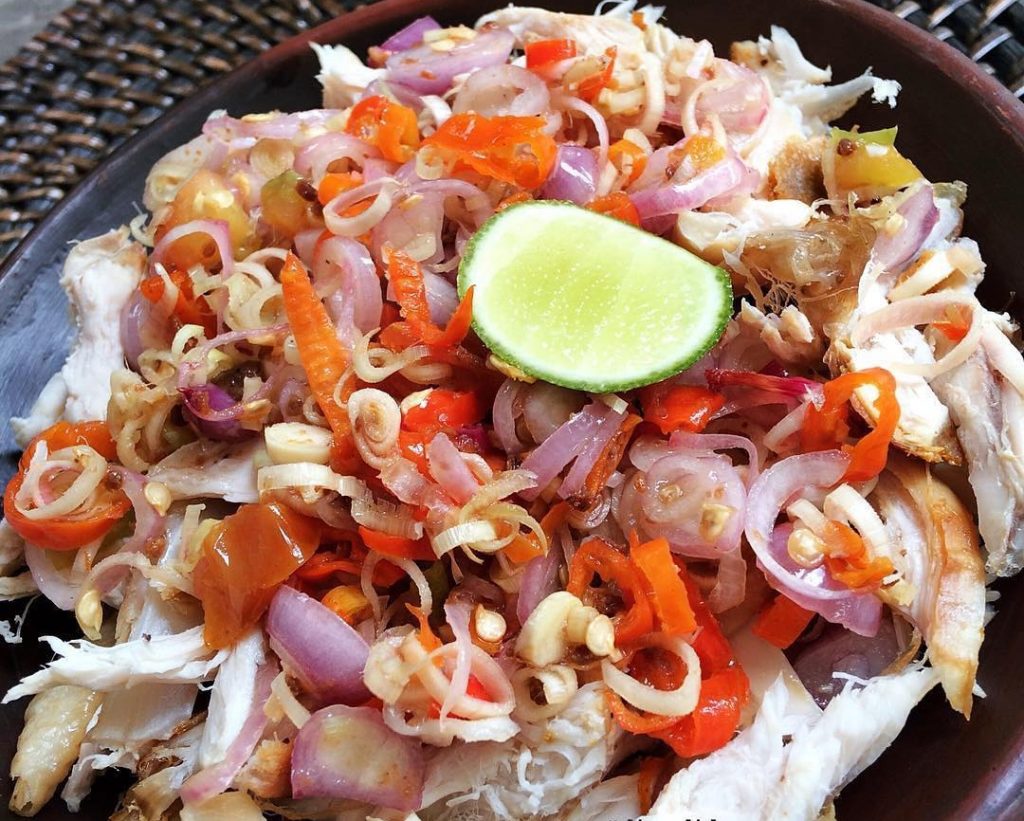 Bali also has its own version of sambal, in which sambal matah is famous for being favored all over Indonesia and tastes delicious. The sambal itself contains a delicious blend of garlic, shallots, salt, terasi, coconut oil and more. As a result, you will get a sambal sauce that is spicy, salty and savory at the same time. For those reasons, sambal matah is so famous that it is widespread to other areas that restaurants in Jakarta (although eating it in Bali guarantees authenticity). 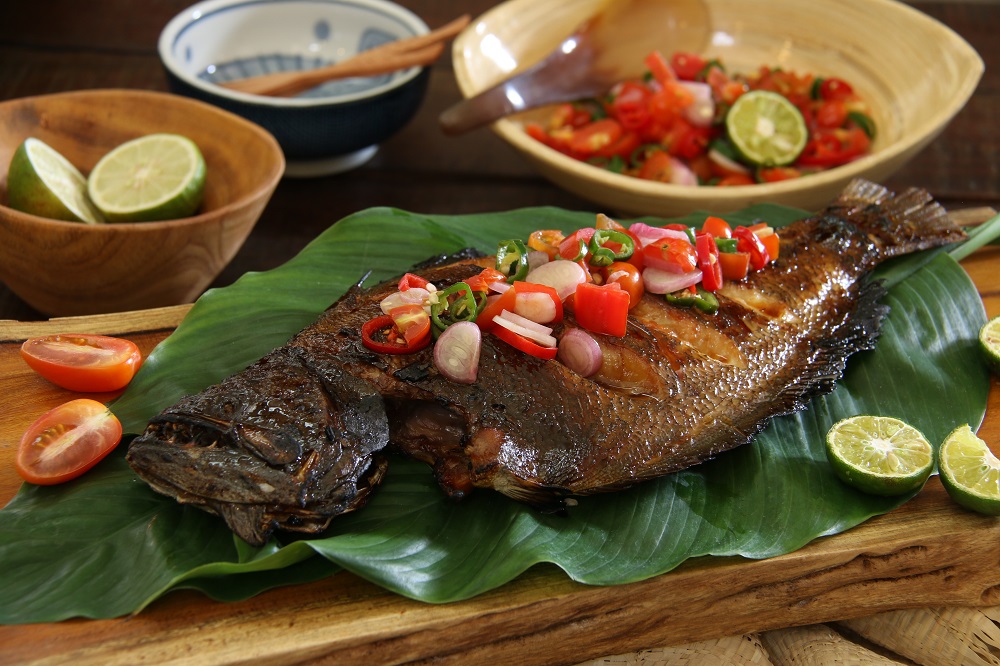 Ikan bakar or grilled fish can be found even in Jakarta or other areas in Indonesia. Yet ikan bakar in Jimbaran is one of the most famed eating spots while you are in Bali. There are many reasons why it’s famous, from the beautiful eating spot right on the beach to the freshness of the seafood that makes it delicious to eat.

Guaranteed, you will feel a whole lot different about Bali once you eat there. 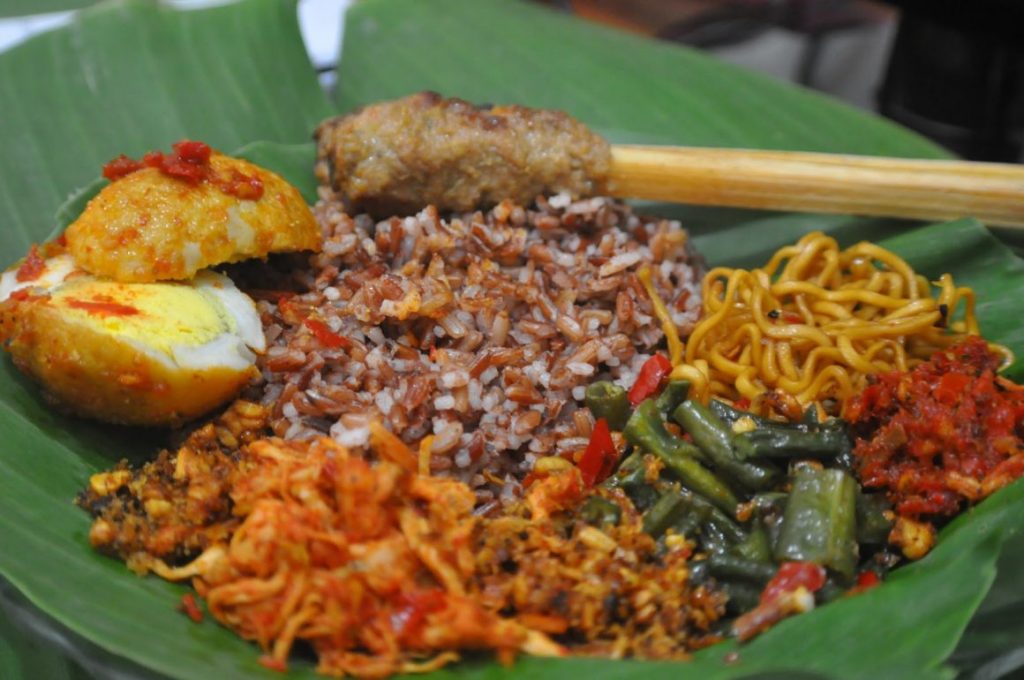 Yogyakarta has angkringan, while Bali has the Nasi Jenggo. Served in small portions, Jenggo comes from the Hokkien language which means ‘one thousand five hundred’, which is the price when it first started selling a long time ago. There are many varieties of nasi jenggo, but basically it’s served on banana leaves with rice the size of a fist and several side dishes. Nowadays, vendors offer more than just white rice, sambal goreng tempe (crunchy tempe mixed with sambal) and ayam suwir (shredded chicken meat). Other choices include fried noodles and eggs.

Bali maybe famous for history, culture and mystical locations. But eating their famed dishes will help you integrate into their culture even more. All in all, going on a culinary adventure in Bali will make you fully understand the culture of Bali. More than understand, you will have fun in tasting all that Bali has to offer!

Have you tried any of these dishes? What is your favorite one of all? Tell us your answer in the comments section below!