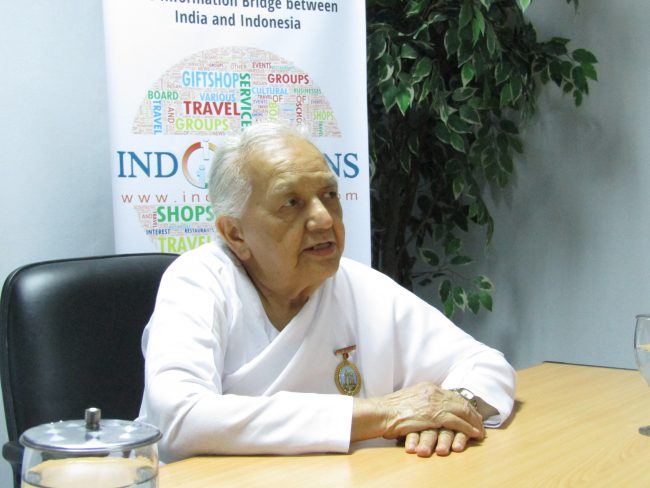 ‘My mission is to share the truth. Many are searching for it, but they haven’t found it. Rather, they are just running behind material wealth, position and everything. So I feel that unless we give the message to everyone in the world, our mission is not complete,’ shared Bramha Kumari Dr Nirmala Kajaria in conversation with Indoindians.

Dr. Nirmala Kajaria is the Director of Brahma Kumari’s Raja Yoga Centres in the Asia Pacific region. Her special area of interest is in the field of self-transformation, personal development and how the human being’s mental process can be enhanced through the accurate method of meditation. Although she was first a medical doctor, her path changed when she finally decided to become a spiritual guru. It was not an easy journey, as there were many challenges along the way.

Her journey began when she was studying medicine. Growing up in a higher middle class household, medicine was the natural path she took because she wanted to help the poor. Her path to spirituality was sealed when she came across the Brahma Kumaris, who made her realize the benefits of meditation. ‘I liked the meditation part. I realized that meditation could help psychologically and spiritually and most patients who come to doctors are 90% psychosomatic. So I thought why not combine medicine and meditation?’,

This train of thought paved her path for 10 years, when she decided to pursue both fields. ‘I wanted to focus on meditation rather than medicine, because there are many medical doctors especially in Mumbai whereas there were very few spiritual people who can teach meditation. English speaking Brahma Kumaris were especially limited at that time. So I decided that I didn’t mind travelling to many countries at different times according to the needs of the organization,’ she said.

Even with the path she chose to become a spiritual guru, it was not without difficulties and challenges. Her biggest challenge was when she moved from India to UK. Though she studied in English, giving lectures in a new country was very difficult as she hardly spoke in English. Living alone and a difference in culture added the difficulty.

Despite it all, there were many moments of happiness and satisfaction. ‘In some countries, people are thirsty for spiritual knowledge. Even in countries like Australia, there aren’t many gurus around, so they are thirsty for spiritual knowledge. They were searching here and there looking for spirituality, so naturally they were so enthusiastic when they found a source. That transformation and acceptance of spirituality helped me see that my time and energy are not wasted. People are experiencing benefits, ‘she reminisced.

With everything that she has achieved, there were still more on her mind. She was fortunate to have realized God. Now, she would like the whole world to realize God and receive that inner peace, happiness, health and prosperity.

Other than her journey throughout her life, she also shared the secrets to her health. Didi Nirmala, as she is affectionately called,  at 83 years of age, credits her health to good fortune, food habits and meditation. ‘It was my good fortune-because my brothers and sisters died before me. My mother as well, she died at 80 years old. My father, in particular was very strict on on his children on what we can or can’t eat. Being a doctor, I also looked after my health. Meditation contributed to my health, because I don’t have any worries in my life.’

For stressed out individuals, she offers a few words of advice. ‘People are running after their job and physical entertainment, while that only lasts temporarily. I suggest spending at least 1 or 2 hours a day for their own empowerment. And meditation can help that because whichever culture or whatever religion they are most of the people would still pray and remember God. But they are not doing it regularly. Whatever you do, you have to do it regularly.’

She adds, ‘You can put food in your body 3 times a day-why don’t you give food to your mind and meditate at least once a day?’

For those who are interested in Bramha Kumari network or for starting mediators, visit: