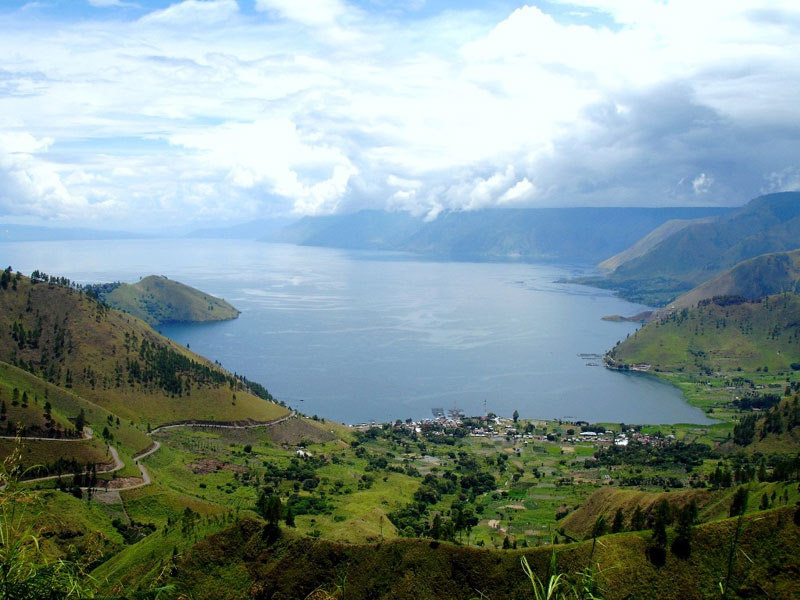 Indonesia has always had many unsolved myths and legends. Wherever you want to look, especially rural areas, are rife with mysticism, legends and superstition. To a certain extent, it can also be attributed to Indonesia’s strong-rooted traditions and cultures.

Many of the places with stories and legends have lots of culture, history and still preserved by nature. One of these places include Lake Toba. 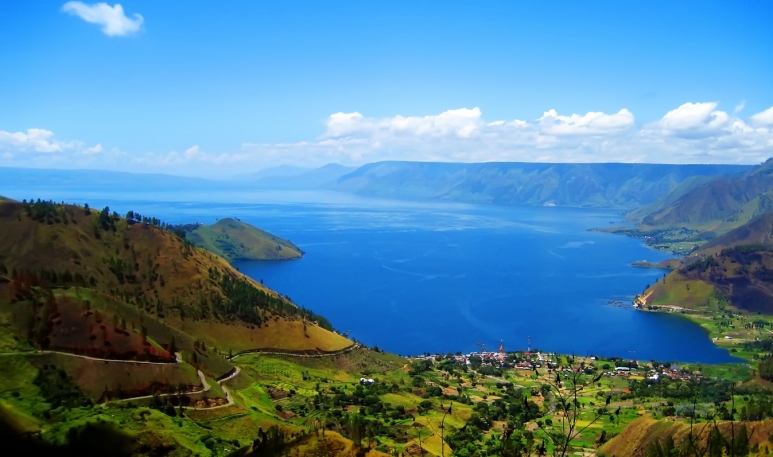 Lake Toba is the largest lake in Indonesia, spanning about 100 km wide and 505 meters in depth. Located in the middle of the northern part of the Indonesian island of Sumatra, it is also the largest volcanic lake in the world.

About 100, 000 to 75,000 years ago, one of the most powerful volcanic eruptions known to mankind caused a layer of ashes of 600 meters to fall down. Afterwards, about 30,000 years ago, a series of explosions created a volcano inside the old one. The resulting caldera lake formed into an odd elongated shape as a result of being stretched out by the magma chamber and the Sumatran Fault along the west. Pressure from the dormant magma, which has not erupted, also caused Samosir Island to emerge.

According to local folklore, Lake Toba originated from a mythical mountain called Mount Tuhaweoba, which is also the name of a type of pepper. It was said that Mount Tuhaweoba exploded, which led to the creation of Lake Toba.

It took a little while for Lake Toba to be put on the map, as the Toba Batak did not like intrusion on their lands. Any foreign envoys were probably kept out of lake on purpose, as it was considered sacred by the population. It was only until 1850 that the lake was officially recognized and put on the map. 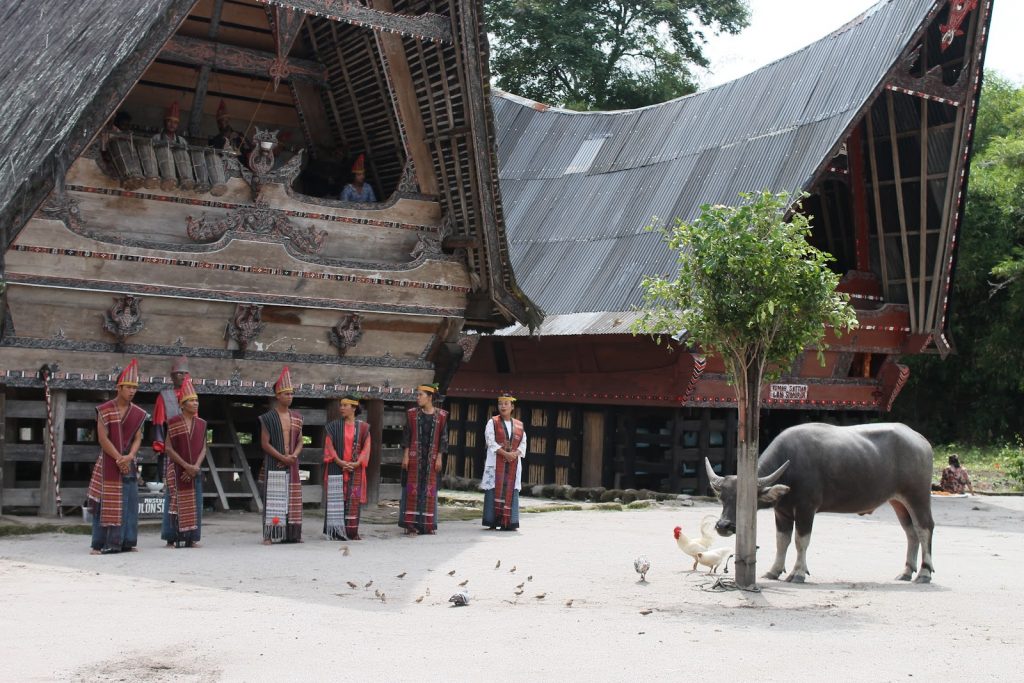 Areas around the Toba Lake were generally populated by the Batak, a native Indonesian tribe that migrated from the Philippines and Borneo some 3,000 to 4,000 years ago.

According to local stories, Si Raja Batak (or The Batak King), mythical ancestor of all Batak tribes, descended on Gunung Pusuk Buhit, a volcano on the western banks of Lake Toba. Nowadays, there are six distinct Batak tribes living around Lake Toba, each different however still related in language and customs.

STORIES AND MYTHS FROM LAKE TOBA

Because of the long history of Lake Toba, there are a lot of mythical stories that are still widely believed by the local Bataknese until this day. Some of the most infamous and notable ones are:

A young farmer named Toba lived alone in a fertile valley. Even so, he was able to support his lonely, humble life with the crops he grew.

One day, he went fishing to a nearby river. After he fished and prepared to leave the river, his rod suddenly caught something. Much to his delight, he had caught a large goldfish. However it began to cry and begged him for its release. He let go of the fish and it suddenly transformed into a beautiful young woman. The goldfish fish claimed to be a princess cursed to be a fish.

Grateful for breaking her curse, the was willing to be his wife under one condition. Her curse was to be kept secret and no one must know that she was a fish, or else a terrible disaster may occur.

The farmer and the woman got happily married and within a year, they were blessed a baby boy. Alas, he grew up with a fierce appetite and would eat all the food without leaving anything left for the rest of his family. He continued his behaviour, until he was once asked to bring rice to his father who was working in the field. On the way, he became hungry and ate his father’s lunch.

Hungry and tired after working in the fields, the farmer hit his son and called him the son of the fish. 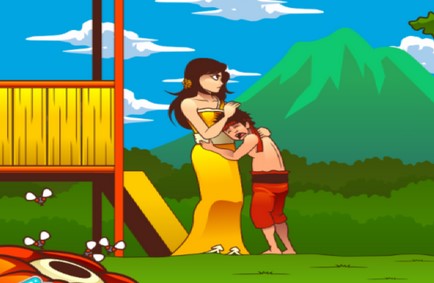 Crying, the boy ran home and asked his mother for the truth. Shocked and saddened by her husband’s behaviour, the princess told her son to run to the hill near their house and to climb the top of the tallest tree. She herself hurried to the river where she met the farmer for the first time and disappeared.

It was told not long after that the sky darkened while thunder and lightning struck above the valley. Long and intense rain began to fall into the valley, causing it to flood. The water levels overflowed the valley which turned it into a lake.

In the second version of the story, they got married and she bore him a daughter. Their daughter also turned out to be greedy, and would afterwards eat her father’s lunch on an errand. After hearing what her husband has said to their daughter, the princess told her daughter to run for the hills as there will be a catastrophe, while she stayed behind and prayed.

An earthquake occurred afterwards, as rain began to fall and springs appeared all over. The area began to flood and became known as Lake Toba in Sumatra. The princess was told to return once more into a fish and her husband turned into the island of Samosir.

The mystical fish are distinctively shaded with three colors: red, black, and white. These colors are particularly significant to the Batak culture as they are used in daily life and in religious rituals, a color-combination called the Bonang Manalu.

According to eyewitnesses, these fish resemble the family structure of a husband, wife and child. The largest fish is said to be 10 meters in length.

Recounts of the mythical goldfishes seem to match with the stories about the origins of Lake Toba. Indeed, there are 3 characters who play a significant role in the story. First, the girl who descended from the heavens who was cursed into a fish. Second, the poor young man who became her husband and their child from the marriage called Samosir. Other than the fish, locals have also witnessed the emergence of a large and scaly snake that sometimes appear on the water surface. The snake is often referred to as the dragon of Lake Toba.

This was once experienced by a visiting group of students. As lots of people do when they gather at a beautiful place, the students took photographs at the edge of the Lake Toba. After a series of photographs, they noticed something strange seemed to appear in their photos. A closer look revealed the appearance of an old man with a bending body and swinging leg.

People who live around the lake often hear voices in the form of cries from the corner of the lake. Witnesses also say that the voices usually appear at midnight and sounded crystal clear. It was believed that the cries comes from the sound of drowning victims in Lake Toba.

Other than the old grandpa and the crying voices, Lake Toba also has other mystical inhabitants. The flat-faced ghost is one of them. It was once recounted that a person was sitting on the edge of the lake. Slowly, a figure of a woman began to approach the sitting man. It was only soon after that the man noticed that the woman had a flat face, with no eyes, nose or mouth. Not knowing whether it was a ghost of human, he immediately ran away. 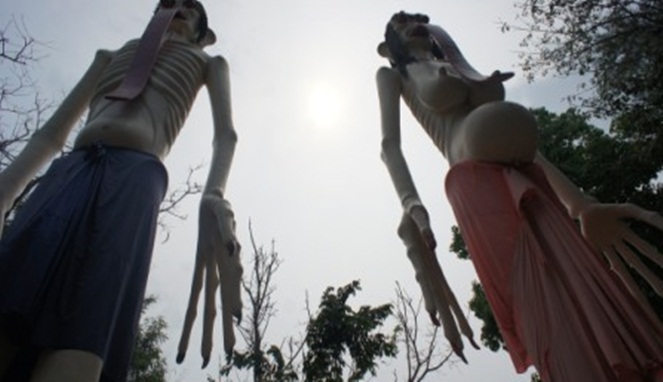 Trees are also said to have mystical inhabitants. Locals believe in Begu Ganjang, a figure that closely resembles the grim reaper with long hair and tall, big figure. If disturbed, it will haunt and take the life of those who disturb it.

It is for this reason that many people are afraid to cut down hundred-year-old trees, for the fear of disturbing Begu Ganjang that likes to sit on top of trees.

It is recommended that tourists be aware of of local customs and act accordingly. This also includes  not hurting animals, throwing trash randomly, and other acts that are considered to be rude. Although it may seem limiting, these are quite respectful guidelines that should be kept in mind by any visitor to any new area that they are visiting.

Lake Toba is really charming with its beautiful views and geographical significance. Its stories, myths and legends add to its charm and create a mysterious allure for the visitors.

Have you been to Lake Toba? What are your impressions of Lake Toba? Are you even more entranced by it now? Comment down below, we’d love to hear what you think!