Home Destination India The 8 Most Beautiful & Mystical Flowers of India 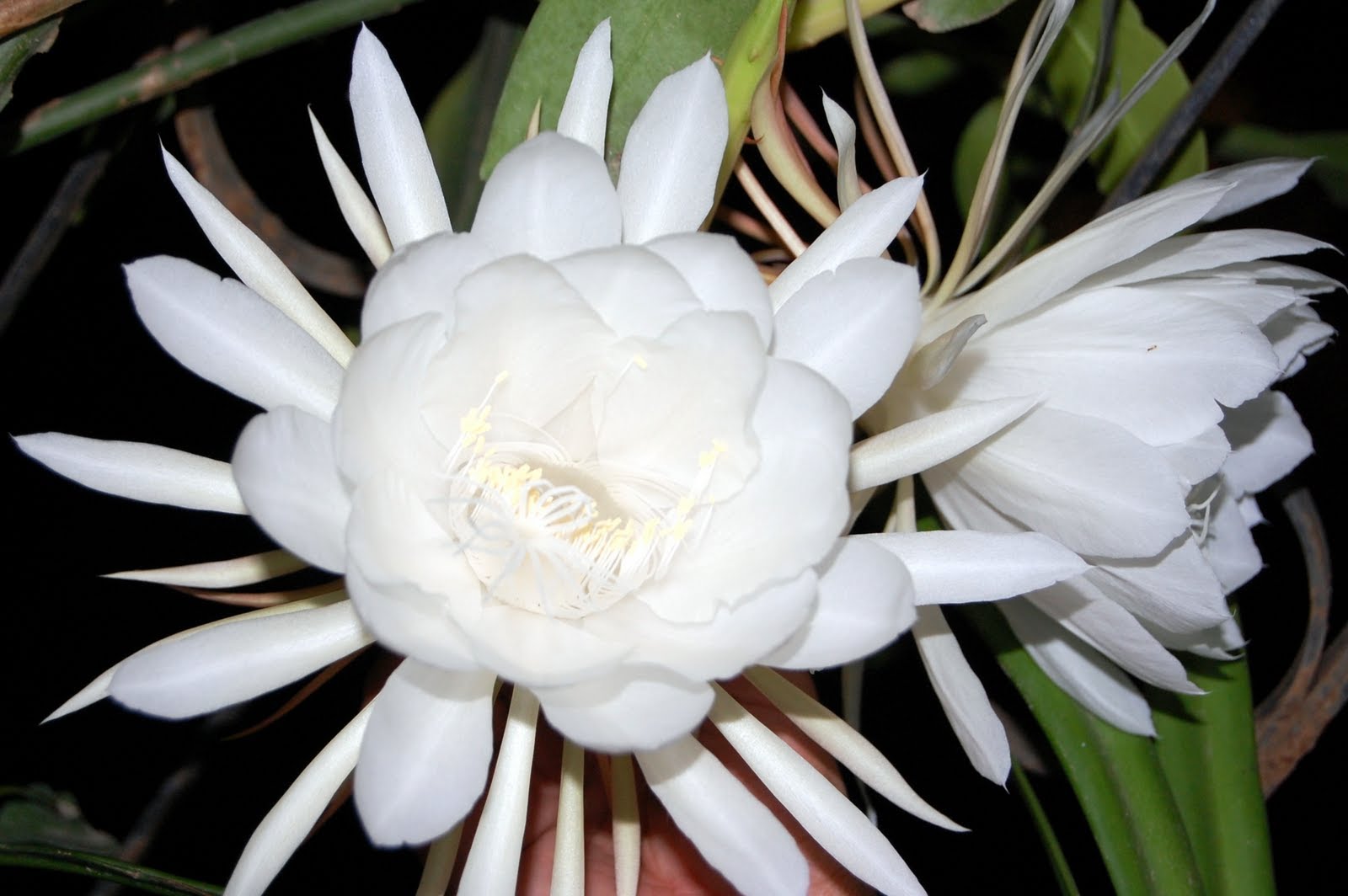 Since time immemorial, flowers symbolize meaning. These stories have been passed down from one generation to the next. Some flowers are also particularly revered for its beauty, vivid colors and fragrant smell. But more than that, flowers are known to have cultural and religious value.

Here are the most beautiful and mystical flowers of Indians states: 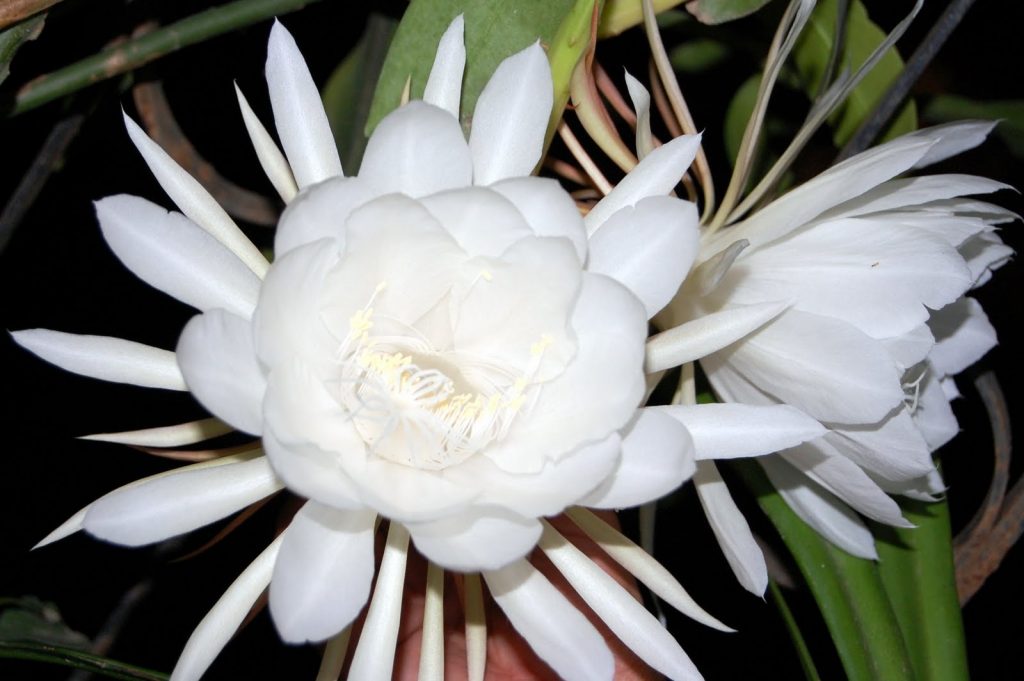 The Brahma Kamal is the mystical flower of the Uttarakhand state. It is rare and considered to be a holy flower, and that anyone would be blessed to see it and have their wishes granted. Unfortunately this cross breed between a cactus and sunflower plant is very rare and blooms only once every 14 years between the months of July and September.

There are numerous Hindu myths related to this flower. The first one is about birth of Lord Ganesha, in which Lord Shiva used water from Brahma Kamal to attach the severed elephant head to Lord Ganesha’s body. The second story is from the Mahabharata when Draupadi sought out one of her Pandava husbands Bhima to look for the flower that gave her so much happiness.

Not only does it bloom every 14 years, but it does so only at night. Beautiful, fragrant and in its full glory only at night. According to the Indian Academy of Sciences, Brahma Kamal is also said to have healing properties from curing urinary tract infections and is also quite effective on sexually transmitted diseases. Flowers, rhizomes, and leaves are used for the treatment of bone ache, intestinal ailments, cough, and cold. 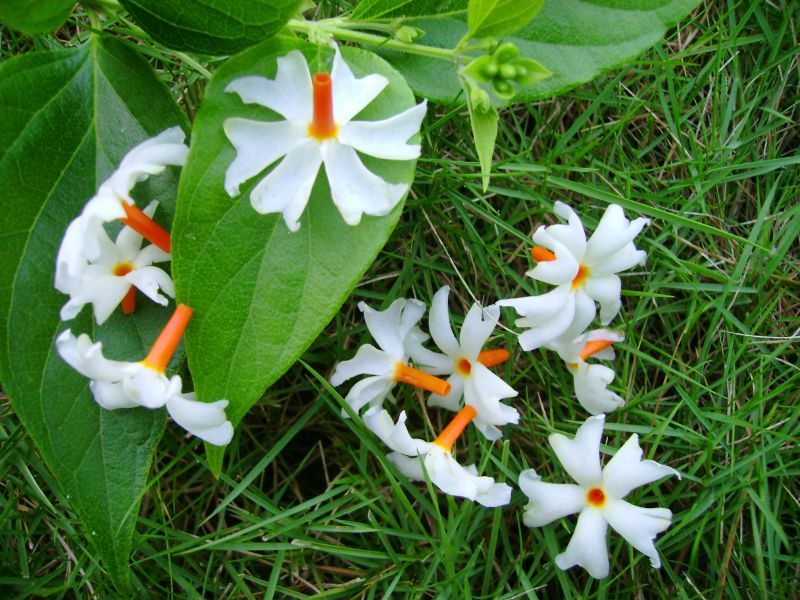 Although its flowers are considered beautiful, the Parijat is considered to be a small tree or shrub in the West Bengal area. The parijat is a yellow flower with 5-7 white petals surrounding it. Similar to the Brahma Kamal, it only spreads its fragrance and blooms in the night. By dawn, it will shed its white petals which would make it lose its brightness and fragrant. It has even garnered another name due to its appearance with the name of the ‘tree of sorrow’ or ‘sad tree’ for its petals are thought to be tears after crying.

The parijat flower has one of the most heartbreaking tales about love. Parijat was first a young woman who fell in love with Surya, the sun god. According to legend, Surya was swayed by Parijat to come down to Earth. As his powers grew stronger by the day and he had to return to the heavens, but when Parijat tried to follow him, she was burned in the process. However her devotion touched the gods so deeply that she was reincarnated as a tree in order to feel love for Surya. The flowers represented what she felt, in which it turned fragrant by night as it had been kissed by Surya, but still could not bear the heat of the sun God. It was for that exact reason that Parijat tree is thought to have cried as could not bear the heat of the sun.

Beauty and fragrance is not the only thing that makes it so revered, but also its medicinal properties that helps various symptoms from curing inflammation, fever, stomach ailments, constipation, skin ailments, diuretic, anti-oxidative and sedative. 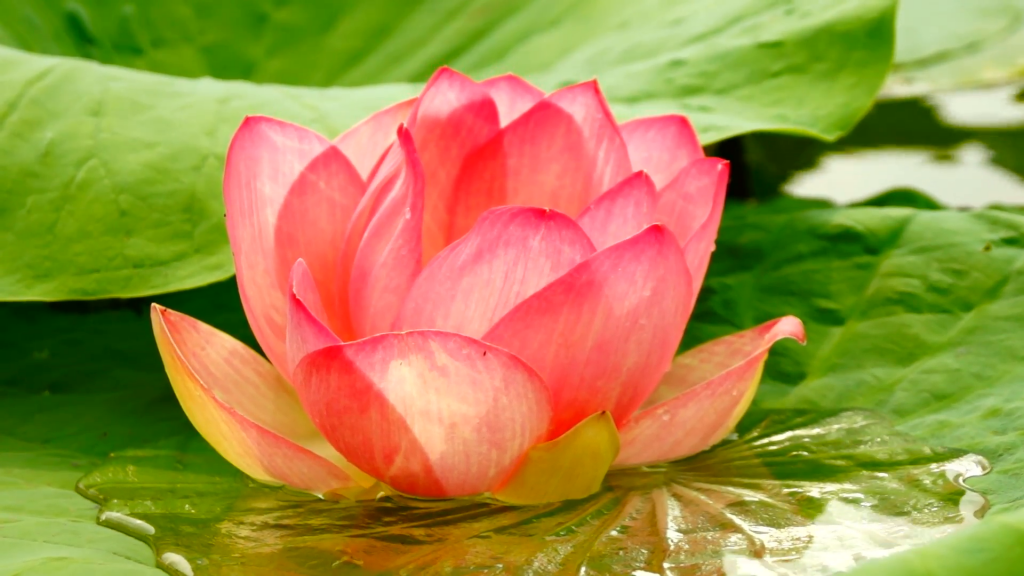 India is known to be one of the countries known for its wide array of flowers. The lotus flower is the national flower of India, chosen for its religious significance. It is a particularly precious flower for it grows among the mud and murky waters, symbolizing the purity of heart and mind despite whatever the situation at hand.

Lotus flowers are known for three things. The first is its beauty, in which the flowers are extravagant and large with white and pink petals surrounding the bud. It grows for three days then closes its petals at night to trap the pollen within it. The second to which it’s known for is its economic value to which every part is consumable. It also has medicinal properties which are good for the cardiovascular system, stomach, reproductive organs, throat, skin complications and kidney and spleen. 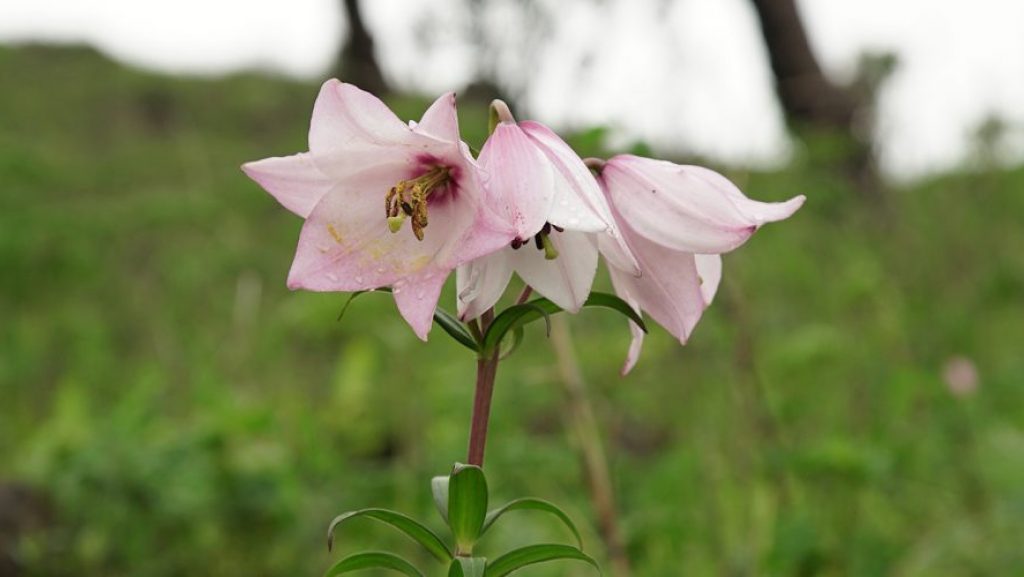 Siroi Lilly of Manipur state is one of the famous flowers in India with an interesting origin story. There are many mysteries that come with this flower from its bluish pink petals that actually have seven colors under the microscope to the place where it sprung up.

According to legend a beautiful princess named ‘Lilly’ was married to a man named ‘Shirui’. One day, he left to work the fields but never came back. Lilly was so full of grief as she waited, till she finally died at the place. The Shirui Lily was thought to have sprouted from her grave as she waited for her husband. Another peculiarity that it can only bloom at the state of Manipur and cannot be cultivated. Which is why it’s believed that the flower grows only in one particular area, which is the Siroi hill.

This flower can also be used for medicinal purposes for its anti-bacterial and anti-anthelmintic properties which can be used for treating skin and stomach problems.

Grown in rainforests, these beautiful orange flowers grow in clusters from February to April. It is a small, evergreen tree with clusters of orange flowers. Although found all around India, it predominantly grows in South of India.

The Asoka tree is thought to be the reincarnated form of Ashoka, who was once a cannibal from the Bhil tribe. He once came upon a hermit, who was so much at peace that Ashoka wished to be like him. Ashoka was then told to live out his life in penance and prayer in order to achieve peace within himself and in order to have his sins forgiven. As he was reincarnated into a tree, he became the tree to shield Queen Sita (Ramayana) in her time of sorrow. Since then Ashoka, the tree that would take away grief.

It is not generally eaten but rather used as medicine. Some of the conditions which it can be used for treatment would be the urinary tract, the reproductive system, hemorrhages, menstrual cramps, menorrhagia and leucorrhoea, internal bleeding. This is because it is effective for having anti abortive, antibacterial, anti inflammatory, antioxidant, astringent, demulcent, diuretic, strongly haemostatic, oxytocic, neural tonic, refrigerant, sedative, uterine tonic and vermicidal effect on the body.

With clusters of pink and light pink, this cluster of flowers is called the ‘pride of India’. This is one of the flowers that has been successfully made into hybrids in various places from Thailand to the Singapore. Fans of these flowers bloom several times a year, so anyone can see it often.

The ‘pride of India’ can be used for medicinal purposes starting from the bark to its leaves. Its bark is effectively used for diarrhea and abdominal pain; leaves and dried fruits traditionally made into herbal tea to treat high blood pressure, diabetes and kidney ailments; finally, plant extracts used for blood sugar control and weight loss.

The Palash tree is a medium sized tree with flowers the color of flames, earning it the name ‘Flame Tree’. Visitors who are travelling can witness the full bloom during the months of January to March especially at the state of Jharkhand, in which these are claimed to be the state flowers.

Palash tree itself is associated with many myths and religious celebrations. Some of the uses include coloring powder for Holi celebration. A unique use of the flower is when a member of the Meitei community dies and the body is not found, these flowers are used as replacements of the body itself to be cremated by the family. In tribal areas, these leaves are used by the women to adorn themselves. The religious value is undoubtable, in which it is used in havan or yagna ceremonies.  It is even believed that the God of life Agni takes the form of the Palash tree.

Every part of this tree can be used from the leaves to the gum itself. Alternative medicine in Unani, Homeopathy and Ayurveda use it as medicine for analgesic, aphrodisiac and antifertility properties.

Everybody loves flowers. Who wouldn’t? Colorful, fragrant and beautiful, you can even find the most beautiful flower that are suitable to your taste. Orange, white, pink, or red-any of these flowers are equally as beautiful with origin stories behind them. Having them at your home will not only beautify your home but also remind you of the story behind it.

Which flowers are your favorite and would you plant it in your home? Tell us in the comments section below!