Home Life Food Do you Dare to Try? 5 Extreme Foods in Indonesia

Indonesia is most known for their spicy, rich seasoning in almost all of their dishes. The rich variety of food it has is also one of its traits, for there are thousands of different tribes within Indonesia, each with its own culture, history and food. But that is not all, as the diversity of Indonesia promises a variety of dishes from delicious, extreme to weird.

Here are the 5 extreme foods from Indonesia:

Rujak Cingur is a local food from East Java, more specifically from Surabaya. Rather than a rujak with fruits, this rujak consists more of vegetables which makes it resemble a salad. With vegetables, it’s added with ketchup, fragments of shrimp and fish called Petis, and peanut sauce. What makes this an extreme dish in Indonesia is that it also consists of cow’s or buffalo’s tongue and nose.

Coming from Yogyakarta, you would not expect this city that had gudeg would also have fried grasshoppers as a snack. It mainly comes from Gunung Kidul region, although it has now grown into an industry of its own. An interesting fact is that this extreme snack was discovered by farmers who encountered many grasshoppers in their fields. Uncertain on what to do with it, the grasshoppers are decidedly fried to be eaten as snacks.

Rempeyek Laron is only made during the rainy season. The reason why is because Larons only appear during the rainy season when their homes are flooded by rain water. The crunchiness of this snack makes it an ideal snack for rempeyek, in which the Laron adds both flavour and crunch. So when rainy season comes, people make rempeyek with Laron as substitute for peanuts.  It’s usually made of specific flour with some ordinary seasoning such as onion and salt with peanuts.

Mice are synonymous with dirt, ditches and sewers. However in Manado, healthy mice are produced to be roasted and eaten. Unlike the mouse that has been contaminated in sewers, healthy mice are farmed in forests and farms which are believed to be healthy and fresh. Usually, the mice are roasted and added with local seasoning, which makes it taste similar to fried chicken. 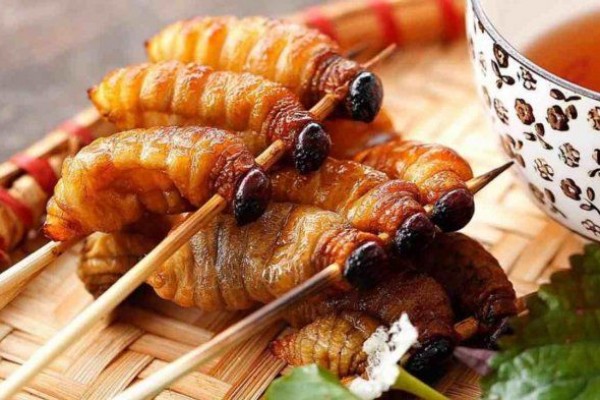 Sago caterpillar is an extreme foods from Papua province. Papuans often harvest Sago caterpillars from Sago Tree, when they are also harvesting from the tree itself. There are many ways to process this food from fried, roasted to even eating it raw.  Luckily the caterpillars are believed to have so many vitamins that the Papuans eat it as side dishes, with some salad and Sago.

Indonesia is a country with many varieties of food and drink from delicious to extreme. Above are the food that are considered to be extreme.

Have you encountered any other extreme foods in Indonesia? Share your experience in the comment section below!